5 November 1916:  It has been estimated that there were the following casualties:[2]

It should be noted that “missing” usually meant dead and some of the wounded would die.  There are 10 officers and 264 other ranks of the above DLI Battalions with 5 November 1916 recorded as their date of death.[3]  With almost 1000 casualties, misery was brought to many Durham homes including the following local men:

So had the Durhams failed?  Perhaps Brigadier General Hugh Tudor and Lieutenant Colonel Roland Bradford had an answer:

“The attack is fixed for tomorrow, in spite of the weather.  It seems rather hopeless expecting infantry to attack with any success in this mud.  The trench mortars have only their muzzles showing above it.  Yesterday we had 2 barrages by brigades.  They seemed fairly good but I should like more guns.  To be effective, a barrage should be an 18-pounder to every 7 yards of enemy front and the guns should be capable of firing 4 rounds a minute at least to start with, without the recuperator springs giving out.”

“There were many reasons why the 9th DLI was unable to hold its ground.  The failure of the troops on the right to reach their objectives and the fact that the division on our left was not attacking caused both flanks of the battalion to be in the air.  The positions to be held were very much exposed and the Germans could see all our trenches and control their fire accordingly.  It was a local attack and the enemy was able to concentrate his guns onto a small portion of our line.  The ground was a sea of mud and it was almost impossible to consolidate our posts.  The terribly intense German barrages and the difficult nature of the ground prevented reinforcements from being sent up to help the 9th DLI.  Four hundred yards north of the Butte the enemy had a steep bank behind which they were able to assemble without being molested.  The terrain was very favourable to a German counter-attack.”

Clearly, the contention was that they had not failed rather they had no chance of success given the shortcomings of the British artillery barrage, a narrow fronted attack against superior forces and appalling weather conditions.  With the benefit of hindsight, it is generally agreed that the possession of the Butte was not a major asset to the enemy and from the British trenches it was possible to prevent the Germans from using it as an observation point.  In any case, the Butte would have been of little use as an observation point.  The Butte had become an obsession and the newspapers talked about “the Miniature Gibraltar” so it had to be taken.  It was a local operation, so costly and rarely worthwhile.  Sadly, actions like the attack of the 151st Brigade on the Butte de Warlencourt on the 5th November 1916 had no real importance within the context of the Somme offensive.  This kind of attack achieved nothing but swollen casualty lists.

The Western Front Association placed a memorial on the Butte some years ago.  This followed the principle made by the officers of the DLI who placed wooden crosses on the Butte at the end of the war. These crosses are now in Durham Cathedral, brought together for a Durham commemoration.  The residents of the village of Warlencourt-Eaucourt which is overlooked by the Butte decided to commemorate the 100th anniversary of the tragic event.

Paul Simpson and I have been committed to visit the Butte on the 5th November 2016 for some time.  Our friends the Bell family asked us to place a wreath at the Butte and a cross at the Thiepval Memorial [4] in honour of their uncle and great uncle Corporal George Thomas “Dode” Cox who met his death on that day.  We were honoured to do so.

Together with Neil Milburn and Alan Goldsmith we visited the Butte, placed the wreath and “walked the walk” around the mound.  We spoke to other groups of descendants with the same intentions at the Butte or in Warlencourt CWGC cemetery. We met Charles and Blanche Crossan residents of Warlencourt-Eaucourt and other members of the organising committee at the Butte and the village hall.  The “official” village commemoration took place the following day, Sunday the 6th but we had to be away to catch a train home.  Blanche described it as follows:

“The ceremony on the Butte on the Sunday was simple and dignified but the crowd was such that the Somme Battlefield Pipeband could not get a place on the Butte but had to remain below.  However the piper had pride of place beside the memorial.  Our mayor was the master of ceremonies and wreaths were laid by him, the local M.P. who also is the Mayor of Bapaume and a representative of the Souvenir Français followed by the National Anthems of Britain, France and Germany being played. It was quite poignant.”

Some of our photographs follow.  Official photographs will be posted when we receive them. 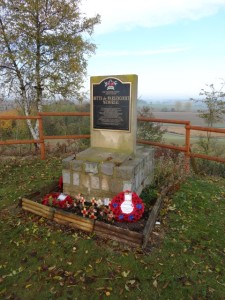 The Butte
Visitors from
County Durham

The Butte: A Hill Too Far 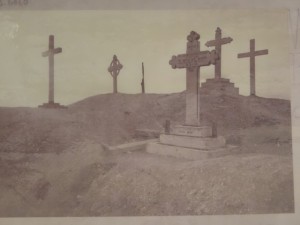 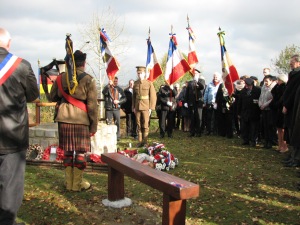