P/KX 84406 Leading Stoker Moses Hudson HMS Grimsby was lost at sea 25 May 1941 aged 26.  He is commemorated on the Portsmouth Naval Memorial and Evenwood War Memorial.

Moses Maughan Hudson was born 7 January 1915, the son of John and Florence Hudson and brother of Bill, Doris, Henry and Jean.  The family lived at 8 Alpine Terrace.  Moses worked as a coal miner prior to enlisting. 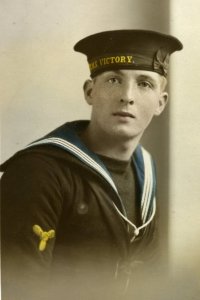 Moses Hudson joined the Royal Navy in 1934, aged 19.  He trained at HMS Victory, a shore base at Portsmouth, HMS Dolphin, at Gosport and was stationed at St. Angelo, at Malta.  His first ship was HMS Grimsby which he joined, 16 February 1939.   HMS Grimsby was a sloop built in Devonport Dockyard, launched 19 July 1933, and completed 17 May 1934. She was 266ft. 3ins. long with a displacement of 900 tons.  Her complement was 100 officers and ratings.  The Grimsby class sloops normally carried 16 stokers, divided into 2 watches, Port and Starboard but during the war this was increased to between 20 and 30.  All the stokers messed together.  14 December 1940, Moses was promoted to Leading Stoker.

Moses’ nickname was “Soapy” Hudson – after the Hudson Soap, commonly used at that time.

In 1938, HMS Grimsby was on the China Station and the East Indies Station then at the outbreak of war, she was recalled to the UK to join the Rosyth Escort Group, protecting east coast convoys.  HMS Grimsby then joined the Red Sea Force escorting ships between Suez and Aden.  In March 1941, she was transferred to the Mediterranean Fleet, 7th Destroyer Flotilla.  HMS Grimsby took part in “Operation Lustre” landing troops on Greece and “Operation Demon”, evacuating the same troops to Crete.

In May 1941, HMS Grimsby was detailed to the “Tobruk Run”, from Alexandria to Tobruk – the navy was loosing a ship each week and it was called the “Suicide Run”.  On 22 May, HMS Grimsby made her first trip to Tobruk in the company of HMSAS “Southern Maid”, a converted South African whaler as escort to SS Helka carrying petrol, water and stores for the besieged Allied garrison.   The convoy arrived at Tobruk on the night of the 24th, Helka and Southern Maid headed for the port and Grimsby steamed out at sea.  Unloading needed to take place in darkness for fear of enemy air attack.  There was not sufficient time for Helka to unload all of her cargo so she had to leave before first light and was ordered to return the next evening to complete the unloading of her cargo. Because of bad weather, actually a sand storm made entry into the port impossible and the ships were told to return the next night.

25 May, just after midday, the 3 ships were attacked by 6 Ju-88 bombers of the Fliegerkorps X.  Fortunately, none were hit but later, a group of 27 Ju-87 dive bombers of the 102nd Group of the Regia Aeronautica (Italian Air Force) attacked.  Helka was their primary target and the second aircraft to attack hit her amidships with 2 bombs and the ship almost broke in two.  The aircraft then concentrated on HMS Grimsby and she was hit at about 16.10 by 2 bombs, one of which exploded in the engine room and the other further aft, near the wardroom.  The second bomb ripped out the bottom of the ship.  The attack lasted about 15 to 20 minutes.  Grimsby’s gunners shot down 2 of the attacking aircraft and Southern Maid accounted for a third success.  Severely damaged and sinking, Grimsby had to be abandoned and survivors from both ships were taken aboard Southern Maid, a total of 160 survivors.  Southern Maid originally headed for Alexandria but was ordered to land at Mersa Matruh, about half way between Tobruk and Alexandria.  At about 10.30 on the 26th, Southern Maid arrived at Mersa Matruh and the survivors disembarked to be taken by ambulances to an Army Medical Sick Quarters.  Two days later, those fit enough were taken to Alexandria by train.

The Official Enquiry into the loss of HMS Grimsby and SS Helka reported:

We can safely assume that Leading Stoker Hudson was in the engine room at his station when the attack occurred.

One crewman had been killed on SS Helka and one was missing, the other 27 crew members were picked up by Southern Maid.  HMS Grimsby lost 10 men and 11 were wounded, 4 seriously.  Those men lost from HMS Grimsby were:

One seaman died of wounds:

Thanks to Thomas Hudson for providing details