This extract is taken from “Little Ireland” Philip Lees’ book, published 2004 and is credited to the late Bernard Hannon.  Bernard and his wife Joan were founder members of our Local History Society back in the mid-1980’s when we enjoyed history classes in the community centre with Durham University tutor, John Smith.  It is repeated here, in full:

During the Second World War German bombers would drop flares over Ramshaw and Evenwood on the way to their targets.  A German company had built the big chimney at Randolph Colliery, Evenwood before the war however the aim of the bombers was not to bomb the pits but instead to provide markers for the return journey to Germany.  In June 1940, a flight of German bombers on their way to Newcastle were intercepted by fighter planes sent up from the nearby airbase at Catterick and turned back. Unable to drop their pay load of bombs on the intended target and no doubt anxious to lighten the aircraft to better make their escape they deposited their bombs over Ramshaw and Cockfield.

There had been an air raid warning the previous day which had proved to be a lone British plane returning to its base thus when the sirens sounded this day no one reacted. The danger was real though and as the bombs dropped some fell close to Gordon Bank Top.

Aunt Jane had made precautions for such an eventuality.  Hers was the only house in the short terrace with a cellar and she had equipped it with chairs and large oil lamps each with a big glass cowl. One lamp had been hung over the steep stairs leading down to the cellar from the joist of the floor above to light the way.

When the bombs started dropping Lucy Hannon hurried her young family next door to Aunt Jane’s, her husband, John, was out on duty as an air raid warden. The other neighbours followed suit except for one old gentleman who refused to move and remained sitting in his chair in the kitchen of his house. John’s young son Bernard could recall the whole incident vividly over sixty years later and remembered the eerie whistling sound of the bombs as they fell and the tremendous explosions that followed when they landed nearby as he made his way to the safety of the cellar. In all some fifty bombs fell.

Once the explosions stopped those gathered in the basement waited nervously to see whether the raid had truly finished. Suddenly the door to the basement at the head of the stairs flew open and Joe Peacock in a somewhat agitated state, began to descend the stairs. Joe was a Special Constable at the time, in addition to his job as a coal miner and appeared in full uniform from the waist up including tin hat but, possibly because he had been in bed due to working night shift that week, he was minus his trousers. He looked down at the sheltering families and they looked up at this wild-eyed half-dressed figure of authority. Joe blurted out:

No one to this day was certain of what he meant though he was a bombastic man, full of his self-importance in his role as a Special, and would often castigate others for sitting around doing nothing at a time of war. No sooner had he spoken that the drama and impact of his words were instantly dispelled as he banged his head against the suspended oil lamp dislodging the large glass cowl which fell onto his head and smashed. Through serendipity Joe’s decision to put his tin hat on rather than his trousers saved him from serious harm but the shock of the crash appeared to make him think the raid had resumed and he scuttled down the rest of the stairs, fell into a chair and sat in stunned silence amongst the equally stunned spectators of the bizarre event. One can only imagine the looks they gave each other but it was story that was told many times over the years, with humour and without the need for embellishment. 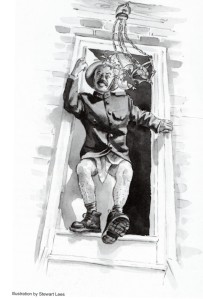 This moment of high farce belied the fact that the danger they were sheltering from was very real. When the families eventually emerged from the basement they found that the houses had, luckily, not been hit, but bombs exploding in nearby fields had blown the glass out of the windows. Happily, the old gentleman who had insisted in staying seated in his kitchen chair escaped injury from flying glass.

John Hannon’s wife Lucy has a beautiful statuette of our Lady of Lourdes in a blue cloak which drew many admiring comments from visitors for its beautiful serene face. This statuette was always kept in the window of the front room. On inspecting the damage after emerging from the basement the statue was found still standing in the window, totally undamaged, not even a scratch. The statuette still stands in her daughter, Angela’s house.

Another lucky escapee of the raid was Mr Quadrini. He was an Italian ice-cream maker who lived at Witton Park where his family had an old fashioned ice-cream shop with booths. The Quadrini family were well known to the Hannon’s as they all attended mass at St. Chad’s Chapel. He had a horse and a two wheeled cart in which he would travel round the local villages selling his ice-cream. On this day he was riding his horse and cart down Gordon Bank from Toft Hill when the bombs started to drop. Mr Quadrini quickly tied his horse to the cart and took shelter in the hedge. It was there he was found after the raid looking understandably ashen, still holding the biscuit tin on his head, the only meagre means he had to protect himself.

Mr. Quadrini, Ice cream man, taking shelter in the bushes with a biscuit tin for protection

There was only one casualty from the raid, a young lad in Toft Hill, by sad irony an evacuee from Newcastle, who had walked out into the street to see what was happening and was killed by the blast from the explosion.

Most of the bombs fell into fields where grazing cows caught the force of the blasts presenting a horrific spectacle of gore and mutilation to the local villagers.

John Hannon and his family suffered no ill effect from the raid, and although it took several months for the windows to be re-glazed, there was little discomfort during that Summer and the house was secure from the weather before Winter arrived.

Thus it was that John Hannon gained the dubious honour of having been “blown out” of his house in the little village of Ramshaw in both World Wars, firstly by Zeppelin L16 in April 1916 and then by the Luftwaffe in June 1940.

Many thanks to Philip Lees.