Percy was born 4 September 1919,[2] the son of John Hope and Sarah Mary Anderson and the older brother to Edith and Clarence.   In 1919, Percy’s father John Anderson lived at West Terrace, Evenwood with his parents, younger brother Ernest and 4 younger sisters, Elizabeth, Florence, Phoebe and Sarah.  He worked as a coal miner [putter].[3] Percy’s mother, Sarah [nee Bowser] lived at Lockey’s Yard, West Auckland with her parents, 3 brothers John, Albert and James and 2 sisters Gertrude and Ethel.[4]  John Anderson died in 1936.[5]  In 1939, the family lived at 4 Staindrop Road, West Auckland.  43 years old Sarah was a widow, undertaking unpaid domestic duties, Percy was a motor lorry driver, Edith was a hand engraver in a factory [possibly Bonds Engraving at St. Helens Trading Estate] and Clarence was at school.[6]

The service details of Driver Percy Anderson have not been researched.  It is likely that he was captured at Singapore.[8]

He was one of many

To us, he was all the world

The cemetery was built by the Australian War Graves Group after the Second World War and contains the graves of Commonwealth servicemen who died in Japan as prisoners of war or with the occupying forces after the war.  It contains 1,555 Commonwealth burials and commemorations. 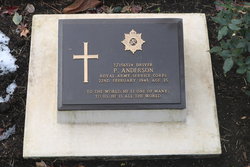