Wilfred Gordon Arkless was born c.1910,[2] the son of William and Charlotte Arkless.  There were 2 children, 4 years old William Raymond and 5 month old Wilfred Gordon.  The family lived at Bowes Hill, Ramshaw in the Parish of Evenwood and Barony.  William was unemployed.[3]

In 1939, Charlotte Atrkless lived at 98 Toft Hill and Wilfred’s wife to be, Frances Elliott lived at 3 George Street, Bishop Auckland.  There is no record of Wilfred.[4]

The service details of Private Wilfred G. Arkless have not been researched.  He served with the 6th Battalion, the Durham Light Infantry which was his local Territorial Battalion and came under the orders of 151st Brigade, 50th [Northumbrian Division].  The 50th (Northumbrian) Infantry Division was an infantry division of the British Army that saw distinguished service in the Second World War.  The division served in almost all of the major engagements of the European War from 1940 until late 1944 and also served with distinction in North Africa, the Mediterranean and Middle East from mid-1941 to 1943. The 50th Division was one of two British divisions (the other being the 3rd Infantry) to land in Normandy on D-Day, 6 June 1944, where it landed on Gold. Four men of the division were awarded the Victoria Cross during the war, more than any other division of the British Army during the Second World War.[6]

D-Day and the Battle for Normandy [7]

The Allied offensive in NW France began in Normandy 6 June 1944 and there was heavy fighting in the vicinity of Tilly-sur-Seulles involving the 49th and 50th Divisions.  Tilly itself was not captured until 18 June and fighting continued nearby until mid-July.  [8]

The 50th Division landed on Gold Beach in the area between Le Hamel and La Riviere and their task was to advance inland and establish the vital lodgement area which would enable the follow up units to pass through and rapidly expand and secure the bridgehead.

6 June 11.00am: 6/DLI waded ashore.  Its assembly area was north of Ver-sur-Mer.  The area had received a severe pounding and there was much destruction

3.00pm: the battalion mobile column moved off but progress was slow due to the congested roads.  Limited opposition was met.

8.30pm: Reached Esquay-sur-Seulles and dug in for the night.

D-Day had passed with drama and fortunately relatively few casualties.

7 June 5.00am: the advance continued to Conde-sur-Seulles

7.30am: reached Conde and attacked by American “Thunderbolts”!

9.00am: main body arrived.  Sniper fire throughout and there was some action at the “Joint Post”.

8 June: 2 men, Pte. Evan Hayton and Pte. William Barlow were missing.  They were taken to Chateau d’Audrieu, a few miles from Conde and together with 24 Canadians were shot by SS troops.  It is alleged that the 12th Panzer Reconnaissance Battalion of the 12th SS (Hitler Youth) Panzer Division was responsible for this atrocity.

9 – 12 June: there was serious action with the 130 Panzer Lehr Division at St. Pierre and Buceels but the battle for the bridgehead had been won.  A few days of inactivity followed.

The next objectives were the villages of Tilly-sur-Seulles, Hottot and Villers-Bocage.  The objective of the 6/DLI was Verrieres.

14 June 10.15am: the advance commenced and after 5 hours of fighting by 4.00pm, the battalion advanced through Verriers.  The battalion suffered 2 Officers wounded and 23 Other Ranks killed and 62 wounded.

The first week of June had seen the following casualties:

The battalion was getting used to fighting in Bocage Country and there was lots of sniping to endure.

The casualties for June were:

16 July: back into positions

18 July: “Operation Goodwood” launched by Montgomery which resulted in the capture of Caen.

9.15am: “A” & “B” Companies moved forward and by noon, Chateau de Cordillon was reached.  The Germans were retreating but snipers, rearguard action, booby traps and anti–personnel mines were constant threats.

30 July: There was a brisk action at a farmhouse.

Total casualties from D-Day to 31 July:

The slow German withdrawal continued with the constant threat of countless mines and booby traps which caused casualties.  4465514 Private Wilfred G.  Arkless died 29 July 1944.  Another to die on the same day was Pte. T. Ansell.  It appears that there was no recorded action on that day and the War Diary has not been researched.  It is assumed that Pte. Arkless died of wounds inflicted some time earlier – possibly as a result of sniping or rear-guard action.[9]

“Loved and longed for always” 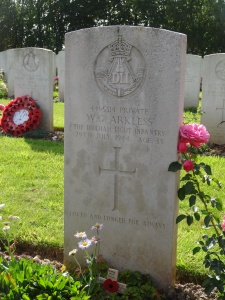 [7] “The Faithful Sixth: A History of the Sixth Battalion, The Durham Light Infantry” Harry Moses