Leonard Allen Armiger was born 31 May 1919 at Brixworth, Northamptonshire,[1] the son of Frank and Florence Armiger and brother to Doris Maude, Ronald Frank and Elsie Joan.[2]  In 1939, the family lived at Frog Hall, Brixworth where Leonard Allen Armiger worked as a Loco Fireman in an ironstone quarry.  He lived with his mother Florence, brother Ronald and possibly one other who’s “record is officially closed.”[3]

The service details of Leonard Allen Armiger have not been researched and the date he enlisted is unknown.  There are a 3 references which refer to a serviceman which could be “our” Alan Armiger, as he was known in Evenwood.  They are:

The first 2 references seem positive but there are doubts about the third.  It is thought that he was captured at Singapore in February 1942 and initially held at Changi POW Camp until at least November 1942 when POWs were despatched to mainland Japan to partake in forced labour.  At some time later, he may have been transported north to Hakodate POW Camp.  The date when he was liberated and repatriated is unknown.

More than 50,000 British forces personnel surrendered to the Japanese between the fall of Hong Kong and March 1942 when the vast territories of the Dutch East Indies surrendered.

During the Second World War, the Japanese Armed Forces captured nearly 140,000 Allied military personnel from Australia, Canada, UK, India, Netherlands, New Zealand and USA in the Southeast Asia and Pacific theatre of war.  More than 30,000 POWs died of starvation, disease and mistreatment.  The Empire of Japan didn’t sign the Second Geneva Convention of 1929 thus did not abide by conventional means of humanity.  The death rate of POWs was 27.1%, 7 times higher than that of POWs held by the Germans or Italians. Allied POWs were forced into hard labour in constructing railways, roads, airfields etc. which were used by Japanese Forces in the occupied areas.  About 36,000 were transported to the Japanese mainland to supplement the shortage in the workforce and compelled to work in coal mines, shipyards, munitions factories etc.

37,583 prisoners from the UK, Commonwealth and Dominions were released after the surrender of Japan.  The organisation of POW Camps on the Japanese mainland were often reformed and rearranged but it is estimated that there were about 130 camps detaining 32,418 POWs.  Approximately, 3,500 POWs died in imprisonment in Japan.

The main camp for British and Commonwealth prisoners held in Singapore was Changi POW Camp which held about 50,000 British and Empire troops.  Work details were sent to various projects on Sumatra, Burma, Thailand and other Japanese occupied territories.  One of the most notorious examples is the construction of the Burma – Thailand railroad [or Death Railway].  Of the 60,000 Allied servicemen forced to work on the railroad, more than 12,000 died from maltreatment, sickness and starvation.[10]

All POWs leaving Singapore did so via the Keppel harbour.  It is known that Gunner L.A. Armiger was sent to a work camp in Japan but the name of the POW Camp is unknown.[11] Dates of departure and destinations to Japan were:

Their treatment in the POW Camps and work places was brutal, for 3½ years, they faced unrelentingly lethal conditions and much has been written:

There is a Gunner A. Armiger listed in Branch 1 Hakodate POW Camp which on release, 15 August 1945 held 509 prisoners comprising 349 British, 155 Dutch and 5 American. [12]  Whether this POW is 1515124 Gunner Leonard Allen Armiger is uncertain.  It is understood that “our” Alan Armiger was in the vicinity of one of the atomic bomb explosions at Hiroshima [6 August] or Nagasaki [9 August] and suffered from radiation burns having to undergo treatment following his repatriation to the USA.[13]  The Hakodate POW Camp in located on Hokkaido island to the north of Japan.  Hiroshima is on Honshu island and Nagasaki is on Kyushu island, both cities are well to the south.  Maybe this serviceman is not “our” Alan Armiger.  Alan stated that he saw the mushroom cloud therefore, it seems likely that he was much nearer to Hiroshima and Nagasaki than Hakodate.  An exhaustive search of records has not taken place.

In 1946, Leonard Allen Armiger married Elizabeth Howe.[16]  Elizabeth was the daughter of Robert and Beatrice Howe, sister of John, Ralph, Vera and possibly 2 others who’s “record is officially closed”.  The family lived at Salisbury Place, St Helen Auckland where Elizabeth worked as a domestic servant and in a fish and chip shop. [17]  She died in 1947.[18] In 1972, Leonard A. Armiger married Phoebe [nee Lamb] Race.[19]  Leonard A. Armiger died in 2002 aged 83.[20]  Mrs. Phoebe Armiger’s residence was 4 Devonshire Place, Evenwood, Bishop Auckland.[21]

These photos are typical of POWs held by the Japanese and do not specifically show Allen Armiger.  The POW Camp shown is typical and may not be any in which he was held. 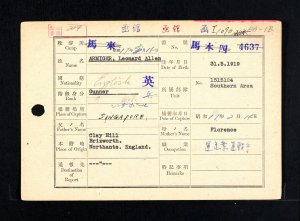 POW Camp awaiting an air drop of supplies prior to liberation