Jonathan Bainbridge was born 1892[2] at Morley the son of John and Sarah Bainbridge.  There were at least 5 children, all born at Morley in the Parish of Evenwood & Barony:

Jonathan Bainbridge attested 28 August 1914 aged 21 years 10 months[6] at Bishop Auckland into the Durham Light Infantry being allocated the regimental number 15348[7] and joined the Army Reserve.[8]  He underwent a medical examination 28 August 1914, was 5ft.6½” tall, fresh complexion, blue eyes, fair hair and was considered fit for Army Service. He was Church of England [9] and unmarried.[10]

The 20th (Light) Division served on the Western Front for the remainder of the war, taking part in many of the significant actions: [15]

1916
2 – 13 June: The Battle of Mount Sorrel, a local operation in which the Division recaptured the height with the Canadians

3 March:  Soviet Russia made peace with Germany and her allies in a separate treaty, the Treaty of Brest-Litovsk.  This meant that Germany could now transfer divisions from the Eastern Front to the Western Front.  More importantly, these Divisions included the original elite of the German Army – the Guards, Jagers, Prussians, Swabians and the best of the Bavarians. In all 192 Divisions could be deployed in the West so that the Germans held superiority in numbers.  The Allies could field 178 Divisions. A single division numbered about 19,000 men so the German High Command could call upon about 3,650,000 men as opposed to the Allies 3,380,000.

It was essential that final victory was gained before the American Forces arrived in Europe in huge numbers.  America had entered the war 6 April 1917 and the first of her troops arrived in France 26 June 1917.  In July1917, the U.S. Commander, American expeditionary Force General J.J. Pershing asked for 3 million men.  The build up of troops took time but eventually by June 1918, the Americans were receiving about 250,000 men a month in France.  This amounted to 25 divisions in or behind the battle zone and another 55 in the United States.

The French were able to draw on a new annual class of conscripts after a year of effective inactivity.  However, the British were worn down by continuous fighting following the major offensives at Arras, Messines, Passchendaele and Cambrai during the summer of 1917. The strength of the British infantry had fallen from 754,000 in July 1917 to 543,000 in June 1918.

21 March 1918: The German Offensive was launched and took 5 phases:

The Germans enjoyed spectacular territorial gains particularly during the initial phases of the offensive.  23 March:  the Kaiser declared a “victory holiday” for German schoolchildren.

The German High Command calculated that it required 200,000 replacements each month but even by drawing the next annual class of 18-year olds, only 300,000 recruits stood available.  Also 70,000 convalescents from hospitals were available each month but even counting them, the strength of the German Army had fallen from 5.1 million to 4.2 million men in the 6 months of the offensive.  It could not be increased on the estimated scale required.

To add to this dilemma, in June 1918, the first outbreak of “Spanish Flu” laid low nearly 500,000 German soldiers.  This epidemic was to reoccur in the autumn and wreak havoc throughout Europe and the wider world.

Added to this the poor diet of the German troops, battle fatigue, discontentment with the military leadership, social unrest at home and a general realization that their great effort was beginning to wane, the Allies counter attack in mid July began to seize the initiative.  Sweeping victories over demoralized German forces eventually led to the resignation of Ludendorff 27 October, the abdication of Kaiser Wilhelm, 9 November and the signing of the Armistice 11 November 1918.

Returning to the first phase of the Spring Offensive, the Germans enjoyed overwhelming superiority of forces, 58 Division against 16. 11/DLI was in action during the early stages of the offensive.

21 March: German forces attacked the whole front.  No DLI Service Battalions were in the line.  The 20th Division was in reserve located at Golancourt and Voyennes.  In the afternoon 11/DLI left for Villers St. Christophe, north of the Somme canal.

22 March: heavy firing heard to the north east in the direction of Holnon Wood and St. Quentin.  11/DLI was required to fill a gap between the 61st and 60th Brigades on the line Tugny-Lavesne.

“By 8pm, when A and B companies arrived, the King’s had had to evacuate Tugny and the support line thus became the front line.  A and B companies, from left to right filled the gap between D company and the Shropshires of the 60th Brigade in position further north.  Before 9.00pm Capt. Endean reported that D company and the King’s had retired leaving the right flank of A company exposed.  A thick fog had gathered and the enemy in Tugny could now be heard shouting in English and making a lot of noise…Soon after midnight B company were rushed from the right rear and there was  confused fighting with the Durhams, Shropshires and Germans all mixed together in the fog.  On the right Capt. Endean and A company fought stoutly but in withdrawing one party came under machine gun fire at close range and were all killed or wounded.

About 70 men of the 11th with 30 Shropshires and some Machine Gun Corps were collected south-west of Aubigny and withdrew down the Ham road, leaving a rearguard under 2nd Lieut. English to support 2 Vickers guns which were still in action.  On the way to Ham, Colonel Hayes received orders to hasten to Offay and hold the bridgehead there.

Meanwhile Capt. Endean and 2nd Lieuts. Galey and Craig and about 40 men of A company had fought a way out in the fog through Dury to Ham. C-S-M T.J. Craggs of Bishop Auckland had done the same with a party of B company and some men of the Rifle Brigade.  For his gallantry in the retreat this warrant officer was afterwards awarded the Distinguished Conduct Medal.” [21]

Further research of the War Diaries gives the opinion:

“It is not known exactly how many men from the other ranks were captured.  Confusion was the norm during the next few days and any attempts to keep track of numbers involved creative mathematics rather than controlled counting.  Many were wounded and taken back to dressing stations.  Scores of men became detached and mixed up with other units, perhaps managing to regroup with their own days later.  Scores more fell into the hands of the Germans either wounded or forced to surrender.” [22]

“Colonel Hayes reached Offay and organized the men who were left with him into one company under the command of Lieut. Bushell, 2nd Lieuts. Martin, Naylor and English were also available and so was C-S-M Craggs who had managed to rejoin.  By this time the 12th K.R.R.C. had arrived and taken over the defence of the canal at Offay.  The Eleventh with a few Shropshires prolonged this line to the right where another battalion of pioneers had been digging before retiring at daylight.  The position reached as far as the outskirts of Canizy and touch was obtained with the 30th Entrenching Battalion holding the line of the canal and the village.  There was telephonic communication with the 60th Brigade at Hombleux and the day passed quietly.  At dusk the German snipers were active and after dark came bursts of machine gun and trench mortar fire. ” [23]

Private J. Bainbridge was killed in action 23 March 1918.  There was no let-up with the German offensive and the fighting continued until 1 April.  11/DLI retreated almost to Amiens, finally being bused to Quevavillers, 12 miles south-west of the city.  The battalion was the strength of a strong platoon.

Private J. Bainbridge was awarded the 1914-15 Star, the British War and Victory medals.[28]

Private J. Bainbridge has no known grave and is commemorated on the Pozieres Memorial.  Pozieres is located some 6km north east of Albert, Somme, France.  The Pozieres Memorial relates to a period of crisis in March and April 1918 when the Allied Fifth Army was driven back by overwhelming numbers across the former Somme battlefields and the months before the Advance to Victory which began 8 August 1918.  The memorial commemorates over 14,000 casualties of the UK and 300 South African Forces who have no known graves and who died on the Somme between 21 March and 7 August 1918.

The Regiments represented with the most casualties are:

Another to serve in 11/DLI at this time was Second Lieutenant T.W. Applegarth aged 24 from Evenwood who was taken prisoner and later died of wounds 8 April 1918.  He is buried at Caix British Cemetery.[30]

[8] Statement of the Services

[9] Army form B.178 and Description on Enlistment

[26] Statement of the Services 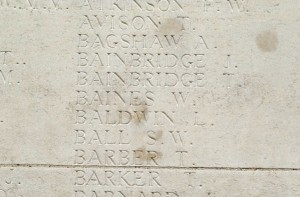 One thought on “Bainbridge J.”