53369, Private Sydney Baines, 15th/17th Battalion, West Yorkshire Regiment (Prince of Wales’s Own) was killed in action 12 April 1918 and is commemorated on the Ploegsteert Memorial, Belgium [1] and St. Helen’s Colliery Memorial Cottages.  He was 19 years old, the son of John and Elizabeth Baines.

Sydney Baines was born c.1899 at Bishop Auckland, the son of John and Elizabeth Baines.  There were at least 7 children:

The German Spring Offensive entered its second phase and the Battle of Lys raged 9 -29 April 1918.  The phase known as the Battle of Estaires took place 9-11 April and the 31st Division was involved.  The Battle of Hazelbrouck 12-15 April followed and the defence of Nieppe Forest saw the 31st Division in action.[10]  The 31st Division was bussed up to the Outtersteene area from billets near Arras.  It was placed at the disposal of the First Army.  The 93rd Brigade was positioned to the east of Outtersteene, to the west of Bailleul.  During the morning of 12 April the 92nd Brigade moved forward behind the village of Doulieu and the 93rd was in support.  But, the remnants of the 40th Division were being scattered by the German onslaught therefore GOC 31st Division Major-General Bridgford decided to use his support, the 93rd Brigade in a counter-attack to stem the German advance.  Covered by only one 18-pounder, the advance was successful and a dangerous situation was averted.

12 April: Reinforcements began to arrive.  The 5th Division detrained west of Nieppe and the 1st Australian Division arrived at Hazebrouck.  The main German attack was directed against the 31st and 29th Divisions defending the line between the forest and Bailleul.  During the day the line was forced back. [11]

11 April: in billets at Merris and in the Brigade Reserve.  The battalion was ordered into the line in support of the 13/York & Lancaster Regiment and 18/DLI and these 2 battalions carried out an attack on La Becque.  The Battalion HQ was established at Noote Boom.

12 April: 7.30pm 4 officers and 100 other ranks formed part of a composite battalion with personnel from other units in the Brigade and took up a defensive position in front of Merris.

8.30pm: The remainder moved to Hondegheim then ordered to retire to the railway and hold the position together with 2 battalions of the brigade.  Very heavy machine gun fire was directed against the battalion.

“The enemy tried to work round our right flank and the Commanding Officer formed a defensive flank to guard against attack.  This party engaged the enemy and enabled the main part of the other two battalions and some of our own to fall back on the road in front of METEREN and there all three Battalion Commanders decided to march their men through the outposts of the 33rd Division and to reorganise behind the lines held by the latter.  This was done and the defence of METEREN orgainised.  The battalion entrenched themselves in a line from the high ground South of METEREN to a point half way down the road between METEREN and BAILLEUL.

15th:   This position was held until the morning of the 15th when they were relieved by the Tank Corps and proceeded to BORRE.  In the meantime “B” “C” & “D” Companies had held the Farm House behind the position A.8.d.8.8. and had put themselves under the command of the 11th Suffolk Regiment.  After very hard fighting these three Companies then took up a position at about the two “L.Ls” in BAILLEUL (Ref. Sheet HAZEBROUCK 5.A.) and on the position becoming untenable they occupied a line from St. JANS CAPPEL to MT. NOIRE on the evening of the 14th and remained there during the 15th and 16th April.” [13]

Orders were received to rejoin their own Battalion at Borre, which had actually moved to Hondeghem but the party joined them there 17 April.  During these operations there were many casualties including Lieut. Colonel C.W. Tilly killed in action 14 April.

“The total casualties were:

The Ploegstreert Memorial, Belgium – Private Sydney Baines has no known grave and is commemorated on this memorial which pays tribute to more than 11,000 servicemen of the UK and South African forces who similarly have no known grave.  The sector covered the line from Caestre-Dranoutre-Warneton in the north to Haverskerque-Estaires-Fournes to the south including the towns of Hazebrouck, Merville, Bailleul and Armentieres, the Forest of Nieppe and Ploesteert Wood.  Many did not die in major offensives but were killed in the course of day-to-day trench warfare which characterised this part of the line – small scale set engagements usually carried out to support major attacks elsewhere. [18]

[11] “The Battle of the Lys: the British Army on the Defensive in April 1918” Geoffrey David Blades 2012 thesis King’s College 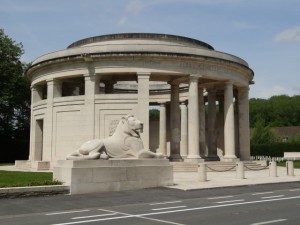 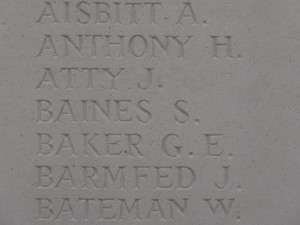 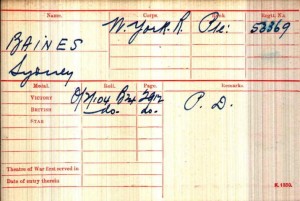