Bananas by the late Ken Hamilton 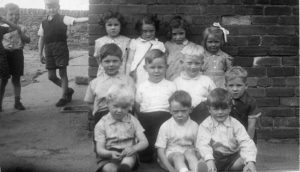 Bobby Corner standing extreme left, next to him ?

The war had finished.  It would be sometime in 1946 when Evenwood Infants School teacher, Sally Willen, drew pictures of fruit on the blackboard, one of which was a banana.  By coincidence, word was out that the Co-operative store was to get a consignment of bananas.  One pupil, Ken Hamilton was particularly interested in tasting a banana.  At 12 o’clock he left school, ran down home to Copeland and asked for a banana.  His mam gave him the Ration Book and he was sent to “the Store” to get some bananas.  Ken ran all the way – to Bank Top, past the school, past Walters, down Swan Street and to the Co-op in record time.  There was a queue outside the Co-op door.  Ken joined behind one of Hodgen’s girls.  The queue moved on, the counter was in sight.  Tom Robinson was dispensing the bananas.  The box of bananas was steadily being emptied.  The Hodgen’s girl got served – it was Ken’s turn.

Ken burst into tears – no bananas!