A John James Bell was born c.1884 at Middleton Tyas, North Yorkshire.  In 1901 he worked as a “Farm Servant” for Samuel Banner, farmer, Folly Grange, Stapleton, North Yorkshire.[2]  He possibly resided in the Butterknowle area sometime later.[3]  He and his family have not been traced on the 1891 and 1911 census records.  John Bell was married to Sarah. [4]  To date, their marriage has not been traced.

John Bell served with the Regular Army, the 2nd Battalion, the Yorkshire Regiment at the outbreak of war.

John Bell was given the regimental number 7979 and joined the 2nd Battalion, the Yorkshire regiment (the Green Howards) which was a Regular Army Battalion.    At the outbreak of war, the battalion was in Guernsey so returned to England (Southampton).  The battalion came under the orders of the 21st Brigade, 7th Division and landed at Zeebrugge 6 October 1914. [6] The 21st Brigade comprised the following units:

The 7th Division was formed by bringing together regular army units from various points around the British Empire.  They were assembled in the New Forest, Hampshire and landed in Belgium during the first week of October with the intention of assisting in the defence of Antwerp.  However, by the time they arrived the city was already falling and the Division was ordered to hold important bridges and other positions so that the Belgian Army could be evacuated.  The 7th Division together with the 3rd Cavalry Division and the Royal Naval Division assisted in the Defence of Antwerp 4-10 October.[7]   Once the Belgians got through the Division moved westwards to Ypres – the first British troops to occupy the city where they entrenched in front of Ypres.[8]

The next actions were:

The involvement of the 2/Green Howards was as follows:

“At daybreak on the 29th October… A and C Companies went up to support the Royal Scots Fusiliers; at about 11.00am the Germans in great strength broke through a regiment on our left and threatened our left rear which forced those on the right to retire about 1000 yards.  Colonel King reorganised the Regiment and collecting anyone he could find from other units, led an attack which was successful in retaking our former position and gaining another 200 yards.  This advance was terrible as the enemy simply poured shrapnel into us and our casualties were heavy.  Major Walker was killed whilst in charge of his company, “C” by a shrapnel bullet…Major Alexander, Levin, Marriage, Thwaites and Sykes were all wounded on the same day………When dawn broke the battalion took up a position which formed a salient…….”

Regiment in reserve.  Two coys sent up to support Royal Scots Fusiliers.  Enemy broke through on left of the line and 21st Bde was formed to withdraw but were quickly reorganised by Lt.Col. C.A.C. King who led an attack which was successful in driving back the enemy and regaining ground which had been previously lost.  During the withdrawal our casualties were heavy.  Amongst the officers Maj. W.B. Walker was killed and Maj. W.L. Alexander, Capt. H. Levin and Lts. L.H. Merring, A.T. Thorne and 2Lt. L. Sykes (W.Riding Reg.) were wounded.”

“We had lost 10 officers killed, 18 wounded and 655 other ranks killed and wounded of which 250 were killed.  What was as fine a battalion as there was in the British Army which had started the battle about 1000 strong was now reduced to 1 captain, 3 second lieutenants and less than 300 gallant men….” [12]

“The odds against them were about 8 to 1…once the enemy found the range of a trench, the shells dropped into it from one end to the other with terrible effect…When the Division was afterwards withdrawn from the firing line to refit, it was found that out of 400 officers who set out from England there were only 44 left and out of 12,000 men only 2336.”  [13]

Private J. Bell was awarded the 1914 Star and clasp, the British War and Victory medals. [16]

Private J. Bell has no known grave and is commemorated on the Ypres (Menin Gate) Memorial.

The Menin Gate is one of four memorials to the missing in Belgian Flanders which cover the area known as the Ypres Salient. Broadly speaking, the Salient stretched from Langemarck in the north to the northern edge in Ploegsteert Wood in the south but it varied in area and shape throughout the war.

The Salient was formed during the First Battle of Ypres in October and November 1914, when a small British Expeditionary Force succeeded in securing the town before the onset of winter, pushing the German forces back to the Passchendaele Ridge. The Second Battle of Ypres began in April 1915 when the Germans released poison gas into the Allied lines north of Ypres. This was the first time gas had been used by either side and the violence of the attack forced an Allied withdrawal and a shortening of the line of defence.

The site of the Menin Gate was chosen because of the hundreds of thousands of men who passed through it on their way to the battlefields. It commemorates casualties from the forces of Australia, Canada, India, South Africa and United Kingdom who died in the Salient and in the case of United Kingdom casualties, only those prior 16 August 1917 (with some exceptions). United Kingdom and New Zealand servicemen who died after that date are named on the memorial at Tyne Cot, a site which marks the furthest point reached by Commonwealth forces in Belgium until nearly the end of the war.

The YPRES (MENIN GATE) MEMORIAL now bears the names of more than 54,000 officers and men whose graves are not known. The memorial, designed by Sir Reginald Blomfield with sculpture by Sir William Reid-Dick, was unveiled by Lord Plumer on 24 July 1927.

Private J. Bell is also commemorated on the Butterknowle War Memorial and the roll of honour in St. John the Evangelist Church, Lynesack.

[3] Soldiers Died in the Great War

Note:  In 1911 there are at least 2 other people with the name John Bell of military age living in the Butterknowle area but both were born locally which eliminates them:

[14] Officers Died in the Great War, no data available for 2/Green Howards but 11 officers died for “any” battalion.  It is assumed that these officers saw action here.

[15] Soldiers Died in the Great War 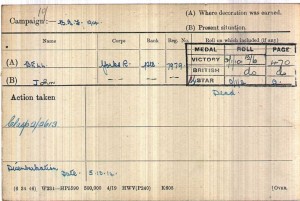 One thought on “Bell J.”