270040 Private Wylam Blenkin, 12th Battalion, the Durham Light Infantry was killed in action 19 October 1917 and is commemorated on the Tyne Cot Memorial, Belgium,[1] the St. Helen’s Colliery Memorial Cottages and the West Auckland War Memorial.  He was 27 years old, the husband of Mary and father of 2 children.

Wylam’s brother-in-law was 3166 Private Thomas William Dunn, 1/6th Battalion, Durham Light Infantry who was killed in action 17 September 1916.  He has no known grave and is commemorated on the Thiepval Memorial, France, [2]

Wylam Blenkin was born 21 June 1890 at Binchester Blocks near Bishop Auckland, the son of Robert and Hannah Blenkin.  The 1891 census records the family living at 31 First Block, Binchester Blocks.  His father Robert was born at Haltwhistle, Northumberland and was a colliery overman.  His mother Hannah was born at Eldon near Bishop Auckland.[3]  There were at least 6 children:

By 1901, 10 year old Wylam lived with his 28 year old sister Margaret who had married William Harrison and resided at 13 Granville Terrace, Binchester Blocks.[4]  By 1911, the Harrison family had moved to 8 Louisa Terrace, St. Helens and Wylam, now aged 20 lodged with them.  He was employed as a coal miner (putter).[5]  In 1912, Wylam married Mary Elizabeth Dunn and they had 2 children, Bobby and Freda.

The service records of Private Wylam Blenkin have not been traced and the exact details of his war service are unknown.  He served with the 12th Battalion, the Durham Light Infantry and was given the regimental number 3525 and later 270040.  He did mot enter France until after 31 December 1915.[6]

The 12th (Service) Battalion, the Durham Light Infantry was formed at Newcastle in September 1914 as part of K3, Kitchener’s New Army and was under the orders of 68th Brigade, 23rd Division. The Division moved to Aldershot in November 1914, to Willesborough (Kent) in February 1915 and in May to Bramshott.  The 68th Brigade original battalions were:

Between 21 and 26 August 1915, the Division landed in Boulogne, France and proceeded to the concentrate near Tilques. The 23rd Division thereafter served on the Western Front until late 1917 when it moved to Italy.

To date, the War Diary of the 12/DLI has not been examined thus the exact circumstances surrounding the death of Private W. Blenkin remain unknown.  Some detail of events is provided elsewhere: [7]

“The 12th spent 3 days at a camp near Westoutre on coming out of the Menin Road action.  The battalion moved up on September 28th to Ridge Wood camp as a reserve to the other brigades of the division still holding the line.  Working and carrying parties of 200 men per day were supplied till October 1st when the 12th departed by bus to Meteren.  Tents at Thieushoek were reached on the 3rd and training was carried on in the rain; but 2 days later the battalion moved to Dickebusch where they lived in the mud with little protection from the weather.  Working parties had to be supplied for burying cable.  The battalion took over the line east of Polygon Wood on the night of October 13th and found themselves just beyond the scene of the fighting in which the 15th had been engaged at the beginning of the month.  The mud and the hostile shelling made the relief difficult and there was no respite during 3 days the battalion held the line.  The German aeroplanes were very active and on one occasion a group of 19, flying low, machine gunned the trenches of the 12th.  On the evening of the 16th the Durhams were relieved and withdrew to rest and reorganise.  Losses during the tour amounted to 90 of whom a third were killed and Capt. C. Powel-Smith and 2nd Lieut. W.R. Chapman were among the wounded.  On the evening of the 19th, the 12th came up again.  Shelling interfered with the relief but on the following day, when a patrol found an enemy machine gun and brought it in, the German gunners paid most attention to the back areas.  German aeroplanes flew low every night, firing Very lights which revealed every movement of our forward tracks.  On the evening of the 21st guides were sent to Hooge Crater and conducted the 15th to the front line.  Relieved before dawn, the 12th with casualties much lighter than those of the previous tour, withdrew to Zillebeke Bund.”

Serjeant Taylor and Privates Conway and McPeak are commemorated together with Private Blenkin on the Tyne Cot Memorial. [9]  They have no known grave and it is likely that the above 5 soldiers were casualties of the usual violence of warfare when on the evening of 19 October 1917, they were hit by German shelling.

270040 Private Wylam Blenkin was awarded the British and Victory Medals. [10]

Tyne Cot Memorial to the Missing:  Private Wylam Blenkin has no known grave and is commemorated on this memorial along with almost 35,000 officers and men whose graves are unknown.  The Memorial to the Missing forms the north eastern boundary of the Tyne Cot Cemetery and is one of 4 memorials to those with no known graves in Belgian Flanders.  The memorial was designed by Sir Herbert Baker and unveiled in July 1927. [11]

[8] Soldiers Died in the Great War 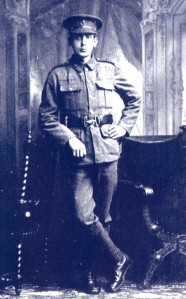 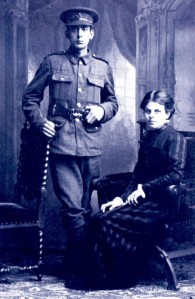 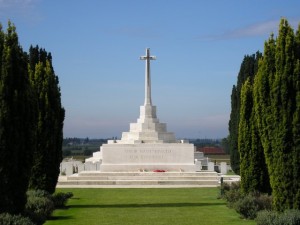 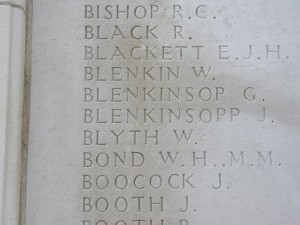