George was born 1887[2] at Shildon the son of Edward and Elizabeth Bolton.  There were 6 children:

George’s father Edward was born in Norfolk and his mother Elizabeth was born in Shildon.  In 1881, they lived at Riceburn near Middridge where Edward worked as a coal miner.[4]  By 1891, Elizabeth was a widow and the family lived at 17 Garbutt Street, Shildon.[5]  By 1901, 15 year old George was working at West Auckland as a coal miner (screen man) and lodging with the Stephenson family at the Foundry Yard.[6]  George married Beatrice in 1907 and by 1911 lived at 10 Chapel Street, West Auckland with their 2 children, 3 year old Joseph Edward and 1 year old Elsie.[7]  Sometime later, Beatrice Bolton lived at 38 Front Street, West Auckland. [8]

George Bolton enlisted at Bishop Auckland into the Yorkshire Regiment being allocated the regimental number 18550.  His service records have not been researched but at some time (date unknown) he was transferred to the 10th Battalion, the King’s Own Yorkshire Light Infantry (KOYLI).  His regimental number was 35057.[9]  He entered France 14 September 1915 [10]

The 10th (Service) Battalion, the King’s Own Yorkshire Regiment was formed at Pontefract as part of K3, Kitchener’s New Army and came under the orders of the 64th Brigade, 21st Division.[11]  The Division arrived in France in September 1915 and took part in the Battle of Loos, 25 September – 8 October, as part of XI Corps First Army.[12]

The Division as part of the XV Corps, Fourth Army then saw action at the Battle of the Somme and up to the death of Private G. Bolton took part in the following battles:

1 July: The first day was preceded by a week-long artillery bombardment of the German positions.  Just prior to zero-hour, the storm of British shells increased and merged with huge mine explosions to herald the infantry attack – at 7.30am on a clear midsummer’s morning the British Infantry emerged from their trenches and advanced in extended lines at a slow steady pace over the grassy expanse of a No Man’s Land.  They were met with a hail of machine gun fire and rifle fire from the surviving German defenders.  Accurate German artillery barrages smashed into the infantry in No Man’s Land and the crowded assembly trenches – the British suffered enormous casualties:

In popular imagination, the “Battle of the Somme” has become a byword for military disaster.  In the calamitous opening 24 hours the British Army suffered its highest number of casualties in a single day.  The loss of great numbers of men from the same towns and villages had a profound impact on those at home. The first day was an abject failure.  The following weeks and months of conflict assumed the nature of wearing-down warfare, a war of attrition, by the end of which both the attackers and defenders were totally exhausted.

Adverse weather conditions, the autumn rains and early winter sleet and snow turned the battlefield into morass of mud.  Such intolerable physical conditions helped bring to an end Allied offensive operations after four and a half months of slaughter.  The fighting brought no significant breakthrough.  Territorial gain was a strip of land approximately 20 miles wide by 6 miles deep.  In terms of casualties, the cost was enormous – British and Commonwealth forces were calculated to have 419,654 casualties (dead, wounded and missing) of which some 131,000 were dead.  French casualties amounted to 204,253.  German casualties were estimated between 450,000 to 600,000.  In the spring of 1917, the German forces fell back to their newly prepared defences, the Hindenburg Line, and there were no further significant engagements in the Somme sector until the Germans mounted their major offensive in March 1918.

The Battle of Morval: an overview

What became known as the Battle of Morval took place in the days following 25 September 1916.  This town is situated in the southern sector of the British 4th Army’s theatre to the north of the French 6th Army.  The objective was to drive the Germans from their positions in the vicinity of Gueudecourt, Lesboeufs, Morval and Combles.    The XIV Corps comprising the Guards, the 5th and 6th Divisions were faced with capturing the fortress villages of Lesboeufs and Morval.

As was customary, the offensive commenced with an artillery bombardment which opened up 24 September.  On this occasion, the Germans had no time to deepen their trenches or prepare deep dugouts, concreted machine gun posts and massed belts of barbed wire.  The infantry went over the top at 12.35, 25 September.  The offensive purposely coincided with a French assault to the south.  The Royal Artillery blasted a “creeping barrage” and the infantry followed into No Man’s Land.  Tanks were to be used in the attack behind the troops and concentrate their fire power on specific strong German positions.  The village of Gueudecourt was still holding out as night fell.

The real success was to the right on the front where the XIV Corps, packed into a narrow frontage to maximise their penetrative power swept forward to dramatic effect, eventually capturing the whole of the German front line system.  The objectives of Lesbouefs and Morval were taken.

In many places along the line the troops of the XIV Corps met little opposition from front line Germans and they smashed their way through.  The village of Combles was left isolated and the Germans had to abandon it the next day, 26 September.  Gueudecourt was finally overrun on the afternoon.  By the conclusion of this offensive, the final objectives had been achieved and in addition land had been captured beyond the villages of Lesboeufs and Morval.

26 September: GOUDECOURT: Enemy in retreat.  Bn. Advanced & took up an outpost lane about 1600 yards from our former line at night relieved & then marched to BERNAFAY WOOD.”

Private G. Bolton has no known grave and is commemorated on the Thiepval Memorial, the Memorial to the Missing of the Somme which bears the names of more than 72,000 officers and men of the UK and South African forces who died in the Somme sector before 20 March 1918 and have no known grave.  Over 90% of those commemorated died between July and November 1916.  The memorial, designed by Sir Edwin Lutyens, was built between 1928 and 1932 and unveiled by the Prince of Wales, in the presence of the President of France, on 31 July 1932.  [20] 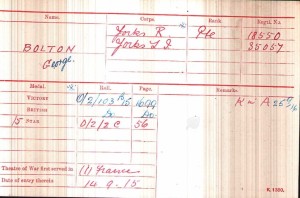 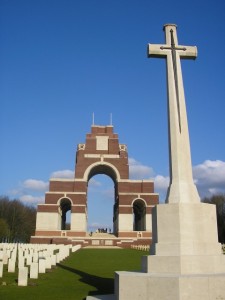 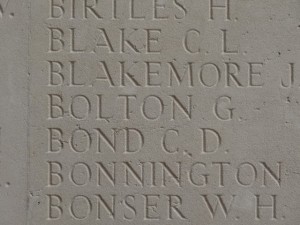 One thought on “Bolton G.”