“Lance-Corporal Edward Bousfield eldest son of Mr. and Mrs. Bousfield of Wooley Hill, Woodland had been awarded the Military Medal for good work in the field and he has been made a Corporal.  He is in the 21st Battalion of the Kong’s Royal Rifles and has seen fifteen months’ service in France.  He is only nineteen years of age.  He was on leave a month ago.”

The above announcement appeared in the TEESDALE MERCURY on 25 JULY 1917 and the following account provides some information about Edward Bousfield.

Edward Bousfield was the eldest son of Isaac and Mary Bousfield.  There were at least 7 children:

Edward Bousfield served with the 21st Battalion, the King’s Royal Rifle Corps [service number C/12420] then the 2nd London Regiment [service number GS/92828] Royal Fusiliers.[4]  The 21/KRRC came under the orders of the 124th Brigade, 41st Division and entered France in May 1916 initially being posted to the Ploegsteert sector, Belgium.[5]  In July 1917, Lance Corporal E. Bousfield was awarded the Military Medal when 19 years old.[6]

Anthony Eden[7] who served as an officer [adjutant] in the 21st Battalion, the King’s Royal Rifle Corps,[8] in his book recounting his war experiences[9] mentions an Eddie Bousfield.  It is highly likely that this is the same Edward Bousfield as reported in the Teesdale Mercury.  Second Lieutenant Anthony Eden led a small raiding party, with the objective of taking a German soldier prisoner so that they could find out which regiment occupied the enemy trenches.  However, they were discovered and fired upon in No-Man’s-Land.  Serjeant Bert Harrop was badly wounded and bleeding profusely.  A stretcher was required:

“Eddie Bousfield, at once volunteered to go.  In a few minutes he was back in our line, had collected a stretcher and a fellow rifleman and re-joined us without being spotted.”

The stretcher was carried back 50 yards to the safety of their own line.  Serjeant Harrop was treated for his wounds, spending 2 years in hospital, enduring 32 operations and recovered to live out life in his native Sheffield.  This action probably took place in July 1916 in the Ploegsteert sector. [10]

The battalion then moved south to the Somme sector.  It took part in 2 major offensives as the Battle of the Somme ground on, notably 15 September 1916, east of Flers when their attack at Delville Wood failed with heavy losses reported as 4 officers including Lieutenant Colonel Charles W.R. Feversham [11] and 54 Other Ranks killed in action, 10 officers and 256 ORs wounded and 70 ORs missing.[12]  Later research records that 21/KRRC between 15 and 19 September 1916, lost 114 Other Ranks killed in action or died of wounds.[13]

The 41st Division moved north back to the Ypres Salient to take part in the Messines offensive notable for the success of underground warfare and the detonation of the 19 mines, 6 June 1917.  Eden describes the occasion as follows:

“At 3.10am our mine exploded under the old mine craters and we leapt from our first line under cover of the barrage.  The colonel and I were on the battalion’s left flank with our headquarters as near to the mine as we dared.  It was an astonishing sight, rising like some giant mushroom to be a considerable height in the air before it broke suddenly into fragments of earth, stones and timber falling over a wide area.  The whole ground heaved so violently that for a fraction of a second we thought we were over the mine instead of beside it.  As the barrage opened simultaneously, the noise of the guns deadened all sound from the mine, except that we could hear, even above this crescendo, the screams of the imprisoned Germans in the crater.” [16]

Casualties were slight, 7 killed and 64 wounded.  But over the next week, particularly 11 June when manning trenches in the Ravine Wood sector, German shelling took retribution and the battalion’s casualties numbered over 200 in 48 hours.[17] Later research records that 21/KRRC during the month of June 1917, lost 37 ORs killed in action or died of wounds.[18]

It is highly likely that Lance Corporal E. Bousfield was awarded the Military Medal for his actions at Messines or the immediate aftermath.

Anthony Eden left the battalion in July 1917 to take up a position in the Second Army headquarters so the paths of him and Eddie Bousfield diverged.  The above account represents a first-hand account of the major events of the war-time experiences.

However, the service record of Lance Corporal Bousfield has not been traced and the War Diary of the 21/KRRC has not been studied so his exact military record remains unknown.  Eddie Bousfield was transferred to the Royal Fusiliers [2/London Regiment].[19]  This probably occurred after 21/KRRC suffered heavy casualties during the German spring offensive of 1918 and was disbanded.[20]

In addition to the Military Medal, Lance Corporal was awarded the British War and Victory medals [21]

[7] Anthony Eden, from Windlestone Hall became leader of the Conservative Party and PM.

[10] Serjeant Bert Harrop replaced Serjeant J.R. Park who was killed in action 20 July 1916 and is buried in Berks Cemetery Extension near the Ploegsteert Memorial, Belgium 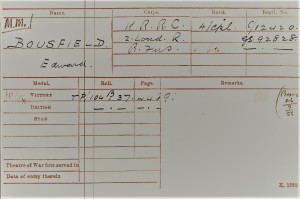