Frederick Maxwell Britton was born 6 January 1893, the son of William Henry and Elizabeth Ann Britton.  There were at least 7 children, all born at Evenwood, County Durham:[1]

William worked as a “colliery fireman” and the family lived at Swans Row, Evenwood.[2]  By 1911, they lived at Farncombe Terrace, Evenwood, William was recorded as an “engineman, colliery”, 18 years old Frederick was a “dilly minder” and 16 years old Edgar worked as a “pony driver”.[3]

Frederick Maxwell Britton was a member of the Territorial Force, 6th [Reserve] Battalion, Durham Light Infantry, regimental number 2677.  He agreed to serve overseas [5] and following the army reorganisation in 1917, his regimental number was given as 250249.[6]  Details of his military service are available from various sources and are provided below:

May 27: reported missing in France.

July 11: acknowledged receipt of the Bar to Military Medal.[10]

The Battle of the Somme July – November 1916

1916 December 11: The Illustrated Gazette reported that a supplement to the “London Gazette” contained details of a list of awards to local non-commissioned officers and men in Northern units, Northumberland Fusiliers and Durham Light Infantry.  Among the list of 78 DLI men were 2677 Sergt. F.M. Britton and 3803 Pte. O. Rushford. [11]  Oliver Rushford lived at Windmill, a hamlet to the north of Cockfield and west of Toft Hill within the Parish of Evenwood and Barony.

The Third Battle of the Aisne: 27 May – 6 June 1918:  The German attack was launched by 4,000 guns across a 40km front against 4 Divisions of the IX Corps.  There was a heavy concentration of British troops in the front line trenches and casualties from this bombardment were severe.  In fact, the IX Corps was virtually wiped out.  The bombardment was accompanied by a gas attack after which 17 German infantry divisions advanced through the gaps in the line.  Rapid progress was made and the Germans broke though the reserve troops (8 Allied Divisions – 4 British and 4 French) between Soissons and Rheims.  By the end of the first day, the Germans had passed the Aisne and reached the river Vesle gaining 15km of territory.  3 June, they had come within 90km of Paris and captured 50,000 Allied soldiers and 800 guns.  French casualties were heavy, with 98,000 losses.  The British suffered 29,000 casualties.  6 June, the German advance had run out of steam.[13]

May and June 1918: 6/DLI in action: [14] The first week of April saw the 6/DLI involved in action in what was to become known as the Battle of Lys before it was relieved and sent to join the French troops in the line at Chemin des Dames in the area of Soissons, thought to be a quieter area.  In early May, an epidemic of influenza visited the training camp at Arcis before the battalion marched to billets at Glennes, a small village near Aisne.  The 6th moved up the line to relieve the 73rd French Infantry in the woods east of the Craonne Plateau.  All was quiet until the evening of 26 May when the message was received that an enemy bombardment was to take place the next morning. Then “all hell let loose”!  Between 27 and 31 May 1918, 6/DLI lost 3 officers and 82 other ranks, killed in action or died of wounds, many remain where they fell, their bodies not found, one of whom is Pte. O. Rushford: [15]

“It may be mentioned that that the total casualties in the battalion during the months of March, April and May had been 60 officers and over 1,200 other ranks.” [16]

27 May:  Sergt. F.M. Britton was reported “Missing”.  He was taken as a POW.  It is assumed that the Bar to his MM was awarded as a result of his actions during May 1918.

November 11: It is presumed that he was released shortly after the Armistice.

Early weeks: It is presumed that he was disembodied [the term used for Territorial soldiers, demobilised for others].  He worked as a coal miner and they were given priority to resuming their previous peace time occupation. 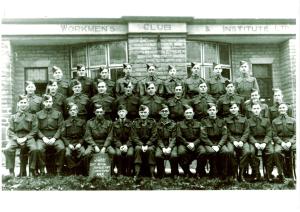 [18] 1939 Register – another person lived there but details are unknown.  Is John Allison his son?