6911773 Private J.  Brunskill, the Rifle Brigade, served a total of 26 years in the British Army, roughly split evenly between the Regulars and the Reserve.  Remarkably, he saw only 4 days “in action” in France and the remaining 4 years 337 days of his war was spent as a prisoner of war in Poland.[1]

Joseph William Brunskill was born 19 July 1908 at White Kirkley near Frosterley, the son of William and Mary Jane Brunskill.[2]  There were at least 5 children:

In 1911, 40 years old William worked as a quarryman and the family lived at Brown’s Houses, Frosterley.[3]

1939:  Margaret Brunskill lived at 1 East View, Etherley Grange with 2 children.  Joseph was not recorded at home.[5]

6 February 1928, aged 19, Joseph William Brunskill, enlisted into the British Army.  He served with the Rifle Brigade for 7 years being posted to India and the Sudan.  In February 1935, he reverted back to civilian life, being transferred to the Army Reserve. 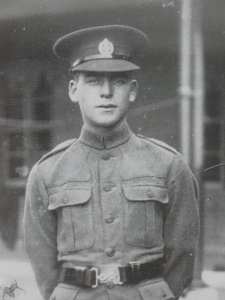 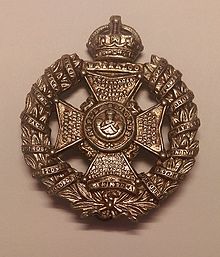 22 May 1940:  The brigade was sent to Calais, France to defend the port against the oncoming German onslaught.  1st Bn., the Rifle Brigade arrived at 13.00 hrs. on Thursday 23 May.  German forces were twice resisted by British troops by the Saturday.  But, after a 3-day siege, with the brigade’s ammunition being used up, Calais was overrun, late on 26 May.  41 men of the Rifle Brigade lie in Commonwealth War Grave Commission cemeteries and another 35 men who have no known graves are commemorated on the Dunkirk Memorial.  In total, 19 Officers and 165 Warrant Officers, NCOs and other ranks of the KRRC, the RB and the QVR were lost between 23 and 26 May 1940 in the defence of Calais.[7] 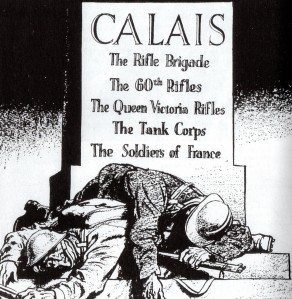 Private Brunskill was initially reported as “missing” but the authorities were later informed by the Germans that he’d been taken prisoner.  He spent the rest of the war as a POW at:

As the Russians advanced through Eastern Europe, the Germans evacuated the POW camps including Stalag XX-B.  The idea was that the POWs would be held hostage to leverage peace deals.  An estimated 80,000 POWs were force marched 500 miles westwards across Poland, Czechoslovakia and Germany towards concentration camps near Lubeck.  According to Private A.R. Wilson 8/DLI who was also held at Stalag XX-B, the “Long March” commenced 23 January and lasted until they were liberated by American troops at a village called Gossa, 27 April 1945.  The horrors of the march included freezing temperatures, poor rations, ill equipped clothing, trench foot, dysentery, gangrene, typhus, lice.  Estimates of the number of deaths vary but 2,200 is generally accepted as the likely total.  Pte. J. Brunskill returned to the UK, 28 April 1945 so he may have been rescued a day or two earlier than Pte. Wilson.  He spent 6 months at No.2 M.D.U. [an Army Hospital?] before returning to “civvy street”.

Joe Brunskill resumed work as a miner, again joining the Army Reserve. He was finally discharged from duty in the Reserve, 10 February 1954.  Margaret gave birth to another 6 children, Marion, Kathleen, Colin, June, Maureen and David.  They family lived at Johnson Street, West Auckland.  Margaret died in February 1958 aged 42 and Joe died in March 1959 aged 50,[10] having told his family nothing of his experiences.

[7] 30 Brigade memorial plaque inside the gatehouse of Calais Citadel