George Byers was born 10 July 1919 [2], the son of John Nicholas and Annie Byers, brother to Elizabeth.  In 1939, the family lived at 66 Front Street, West Auckland and John worked as a builder, George was employed as a general manager and estimator to a builder and Elizabeth was employed as a brewery ledger clerk. [3]

The service details of Sergeant [Pilot] George Byers have not been researched.

In the midst of life 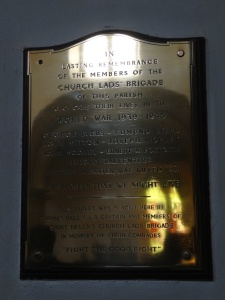 Memorial to the Church Lads Brigade in St. Helen’s Church

[3] 1939 England & Wales Register Note: There could have been another sibling.