30238 Lance Corporal John Clarke, 1/6th Battalion, the Durham Light Infantry died of wounds 27 March 1918 and is buried in Namps-Au-Val British Cemetery[1] and is commemorated on the Billy Row War Memorial near Crook, the Etherley War Memorial and the roll of honour in St. Cuthbert’s Church.[2]

John was the son of Amos and Mary Hannah Clarke.  There were 2 sons both born at Newby Wiske, North Yorkshire:

In 1901, the family lived at Gainford, County Durham where Amos worked as a cowman on a farm.  By 1911, they lived at Etherley.  Amos was a groom/gardener and 17 year old John was employed as a clerk by a colliery company.[4]

The 1/6 DLI was a Territorial Force which had served on the Western Front since April 1915.  The 1/6th Battalion was formed in Bishop Auckland in August 1914 as part of the Durham Light Infantry Brigade, Northumbrian Division and in May 1915 were under the orders of the 151st Brigade 50th (Northumbrian) Division. [8] 16 April 1915 the Division moved to France and served with distinction on the Western Front throughout the war.  Other battalions were:

Following heavy casualties in June 1915 the battalion merged with the 1/8th to become the 6/8th then it returned to its original identity 11 August 1915.  The Brigade was joined by:

Following the German Spring Offensive, it was reduced to cadre strength in July 1918 and transferred to Lines of Communication. [9]

Often called “the Kaiserschlacht” the offensive was Germany’s last big effort to win the war before the arrival of huge numbers of American troops.  The U.S.A declared war on Germany 6 April 1917 but it naturally took time to build up forces and train them for battle.  The Russians signed for peace with the Treaty of Brest-Litovsk in December 1917 so the Germans transferred their battle hardened troops from the Eastern Front to the Western Front and prepared to attack the Allied forces.  The German plan, Operation Michael was to punch through the British and French Armies at St. Quentin, cut through the Somme and then wheel north-west to cut the British lines of communication behind the Artois fronts to bottle up the BEF in the narrow neck of Flanders.  The British Army would be surrounded with no means of escape and would inevitable surrender.  The target of the first phase of the offensive was the British Army who the German High Command believed to be exhausted by the four major efforts of 1917, namely Arras, Messines, Passchendaele and Cambrai.

By mid-February 1918, there were 177 German Divisions in France and Flanders out of their world-wide total of 241.  Of these, 110 were in the front line of which 50 faced the short British front.  A further 67 were in reserve with 31 facing the BEF.  The British had 62 under strength divisions defending a recently extended front line.

At the same time as the German forces were growing, the British Army was depleted having faced a manpower crisis during the second half of 1917.  Lloyd George produced official figures to confirm that there were some 324,000 additional men on the Western Front (i.e. British and Dominion forces) giving a total of 1,850,967 on the 1st January 1918 as opposed to 1,526,182 on the 1st January 1917 but the effective fighting strength had fallen by as much as 7% in the year. The 50th Division together with the 1st Cavalry, the 8th, the 16th, the 24th, the 39th and the 66th Divisions formed the XIX Corps of the Fifth Army

21 March 1918: The German Army enjoyed a numerical superiority of 56 Divisions against 16 British. Enemy superiority was overwhelming. The main weight of the attack was between Arras and a few miles south of St. Quentin.  The XIX Corps occupied the line to the east of Peronne and to the north of Vermand facing 9 German Divisions on an 8-mile front.  German superiority was approx. 4.5 to 1.   The German success was spectacular:

The Third Army held firm near Arras but had to swing back its right hand forces to maintain contact with the retreating Fifth.  The casualty figures for the 21st March have been estimated as:

However, “only” 2/3rds of the German casualties were wounded so a substantial number would return to the fighting at a later date.  By contrast, 28,000 of the British would not return, 7,000 were dead and 21,000 had been taken prisoner.

27 March:  the Germans were able to cross the Somme at Chipilly which compelled Gough’s Fifth Army to retreat to a line running from Bouzencourt to Rosieres.  The British held the line throughout the day but to the south the French were driven out of Lassigny and Montdidier.

March 1918:  6/DLI was near Peronne in the Fifth Army Reserve where it:

“might have to deliver counter-attacks in the event of a German success.”

21 March: The German attack began.  Entrained at Gouzeaucourt and detrained at Brie, marched in the direction of Tincourt, occupied partially dug trenches called “the Green Line.” These were behind the Brown Line trench system where the 66th Division had been overwhelmed in the morning.

22 March:  Morning: quiet.  Afternoon; shelling became heavier, large massed bodies of the enemy could be seen.  Orders received that the line was to be held at all costs.  Dusk: first serious casualties occurred.  9.00pm: orders to withdraw to a ridge near Cardigny

23 March:  07.00am: orders received that the Fifth Army was to withdraw to the west of the Somme.  6/DLI was to cover the retirement of the 5/DLI – enemy snipers and machine guns giving considerable trouble.  Y Company formed the rear-guard to the Battalion.  The route went through the village of Le Mesnil – light shrapnel barrage and fighting as the village was in enemy hands.  Two officers were lost and about 20 men.  The night was quiet.

24 March:  Morning: orders received to withdraw to Foucaucourt.  8.00pm in position in reserve, in a line north east of Estres.

25 March:  Morning: enemy advancing quickly.  W and Z Companies filled gaps in the line.  Enemy did not take advantage of the situation.  7.00pm withdrew to old trenches at Pressoire – quiet night with only a few casualties from shell fire.

26 March:  9.00am enemy renewed the attack, battalion passed through the ruins of Lihons and the withdrawal continued almost to Rosieres – heavily shelled.

“At 9.30am owing to the withdrawal of a Labour Coy on the right, the Battalion fell back but 3 Coys (W, X & Z) counter attacked & restored the line.  Capt. H. Walton MC commanding Z Coy killed.  Details of Battn who had been left out of action were sent from WARFUSEE under Lt. TYERMAN to counter attack at HARBONNIERES.”

28 March:  a further withdrawal was ordered and the battalion moved back to the Caix line.

“During the fighting from 21st – 31st March, the Battalion suffered the following casualties.  Killed: Officers 6 OR 35.

Between 21 and 31 March 1918, the 1/6 DLI lost 4 officers and 64 other ranks killed in action and died of wounds, 9 other ranks were killed in action 26 March.[13]  These figures differ slightly from the War Diary details provided by Capt. R.B. Ainsworth but given the prevailing situation, it is remarkable that any coherent analysis was undertaken at all.

At Caix, the remnants of the Battalion were re-organised and occupied the Caix line before withdrawing to Moreuil then to Saleux then eventually onto Rue and Vron.  French troops were moving up the line to check the German advance.  In early April, the Battalion was sent to Beuvry near Bethune about 4 miles behind one of the quietest area of the British front.  Here a draft of about 400 men arrived and they were being prepared to relieve the 55th Division at La Bassee.  However, this did not happen and they were sent to Estaires instead.  This was to be the location for the Second German Offensive.

“It may be mentioned that the total casualties in the Battalion during the months of March, April and May had been 60 officers and 1,200 other ranks.”

Early in June 1918, the remnants of the 50th Division was broken up.

Lance Corporal J. Clarke is buried at Namps-Au-Val British Cemetery at grave reference I.A.28.  The village is located to the south west of Amiens.

Lance Corporal John Clarke is commemorated on the Billy Row War Memorial near Crook, the Etherley War Memorial and the roll of honour in St. Cuthbert’s Church.

[2] All local memorials record the name as CLARK

[3] Army Form NOTE: the name is recorded as CLARKE 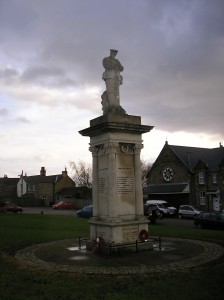