45249 Rifleman H. Dobbin, 1/5th London Regiment, Rifle Brigade (The Prince Consort’s Own) was killed in action 27 September 1918, is buried in Chapel Corner Cemetry, Sauchy-Lestree, France [1] and is commemorated on the St. Helens Colliery Memorial Cottages.  He was 32 years old, married to Nora and they had at least 2 children, Ethel and Mathew.

By 1901 Henry was a widower and the family lived at Whessoe Lane, Cockerton, Darlington, Co. Durham and he worked as a general labourer.  His son Harry then aged 15 also worked as a labourer.[5]  Harry married Nora Hull 17 December 1906 in the Auckland registry area.[6]  By 1911, Harry and Nora lived at 1 Maude Terrace, St. Helen’s Auckland and they had 2 children:

Harry was employed as a colliery fireman.[7]

The service record of Rifleman Harry Dobbin has not been traced and the War Diary of the 1/5th London Regiment, Rifle Brigade has not been researched.  The date he enlisted is unknown.  He originally served with the Durham Light Infantry (DLI) being issued the regimental number 35976 [8] thus was transferred to the Rifle Brigade later in his army career and given the new regimental number 45249 [9] (at a date not yet researched).  It seems likely that he did not enter France until after 31 December 1915 since he was not awarded the 1915 Star. [10]

The date of Rifleman H. Dobbin’s death coincides with the start of the Battle of the Canal du Nord (27 September – 1 October 1918) which was a phase of the Battle of the Hindenburg Line.[14]  The assault position was along the inter-army boundary between the British First and Third Armies. Both Armies were tasked with continuing the advance started with the Battle of Drocourt-Queant Line, Battle of Havrincourt and the Battle of Epehy.  The British First Army’s objective was to secure the northern flank of the British Third Army by crossing the Canal du Nord.  The Third Army was tasked with securing the Escaut (Scheldt) Canal so to be in a position to support the British Fourth Army during the Battle of St. Quentin Canal.  The Third Army was able to occupy the towns of Queant and Pronville without any fighting as the Germans fell back.[15]  The Canal du Nord was crossed 27 September 1918.  The 56th Division was in reserve but several units went forward to assist the Canadians and advanced on the Canal de la Sensee where it dug in. [16]

Rifleman H. Dobbin is buried at grave reference B.6. Chapel Corner Cemetery, Sauchy-Lestree, Pas-de-Calais.  The village is to the north of the Arras to Cambrai road and the cemetery contains 178 First World War burials. [19]

[8] Soldiers Died in the Great War 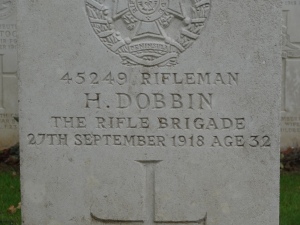