There was no shortage of places of worship in Evenwood and Ramshaw.  There was the Primitive Methodist Chapel at Gordon Lane, Ramshaw dating from 1870, the Wesleyans at Swan Street 1876, the Congregationalists at Stones End 1906, another Primitive Methodist Chapel at Shirley Terrace 1912 and a Salvation Army Mission at Chapel Street [later to be the Pentecostal Church]. The Church of England offered its faith at St. Paul’s from about 1866.[1]

The King being head of the Church of England provided spiritual guidance in the form of the New Testament issued to all servicemen and women.  There can be of little doubt that in times of crisis such as war, faith is revived and followed by many.

Keith and Maurice Bennett from Station Terrace were staunch Primitive Methodists and worshiped at the Ramshaw Chapel.  Maurice’s New Testament is pictured here. 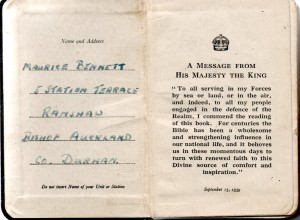 St. Paul’s holds a book of Holy Communion presented to the church and its congregation by John and Hannah Snowdon in memory of their son, Thomas.  He was killed in action 15 June 1942 at Gazala, Libya.  The family lived at Manor Street, Evenwood then later at Cockfield.  John Snowdon was employed by Summerson’s as the colliery manager and mine surveyor at Randolph and Gordon House collieries.  During the war years, he was also a Special Constable.[3] Thomas Snowdon did not follow the family tradition of working in the coal industry but he was employed by one of the banks in Bishop Auckland.  The family headstone in Cockfield cemetery commemorates John and Thomas Snowdon. 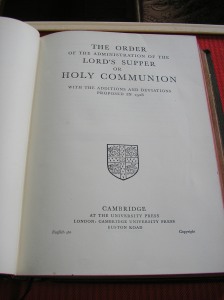 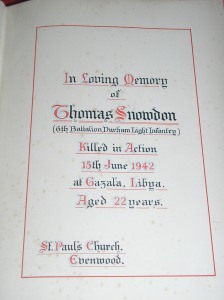 Here’s a selection of Christmas Greetings cards from the servicemen overseas.  There were no cheery messages of goodwill to all mankind!

1940: from Private Dennis Vickers, 8th Battalion, the Green Howards to his sister Doris. 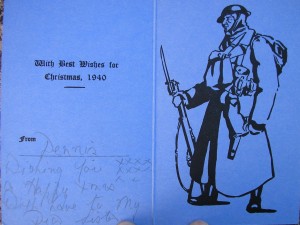 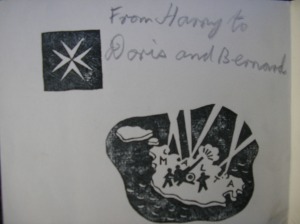 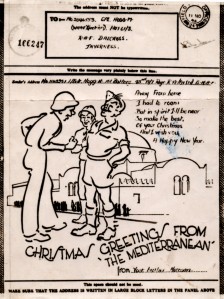 1945:  Marine Ronnie Heaviside stationed at Malta to his parents.

[2] “Little Ireland” 2004 P. Lees p.108 Note: Phil Lees suggests that the Congregationalist Chapel was originally built as the RC church but local understanding is that the former Pentecostal Church at Chapel Street, now demolished, was the building.