George Dowson Gargett was born 8 July 1896 [2] at Butterknowle to Alfred and Annie Gargett.[3]  There were at least 4 children:

In 1901, the family lived at Fell Buildings and Alfred worked as a coal miner (hewer). [5]  George attended Cockfield Church of England School then Cockfield Council School between 14 January 1907 and 4 July 1910, leaving at the age of 14 to take up work.[6]

The service details of Private G.D. Gargett have not been researched and the war diary of the 12/Northumberland Fusiliers has not been consulted. [9]

The 12th (Service) Battalion, the Northumberland Fusiliers was formed at Newcastle as part of K3, Kitchener’s New Army and came under the orders of 62nd Brigade, 21st Division.  It landed in France in September 1915 and in August 1917 amalgamated with the 13th battalion coming the 12/13th Battalion.[10]  The 62nd Brigade comprised the following units:

The Division saw action in 1915, the Battle of Loos; 1916, the Battle of the Somme including the Battles of Albert, Bazentin Ridge, Flers-Courcelette, Morval and Le Transloy then in 1917, the German Retreat to the Hindenburg Line, the First and Third battle of the Scarpe, the Flanking Operations around Bullecourt which were part of the Arras Offensive. [11]  In particular, the 21st Division as part of the 7th Corps, Third Army, was involved in the Actions on the Hindenburg Line, 20 May – 16 June 1917 as part of the Flanking Battles on the Bullecourt Flank [12] which are relevant to the service of Private G.D. Gargett.

Arras Memorial: Private G.D. Gargett has no known grave and is commemorated on the Arras Memorial located in the Faubourg-d’Amiens Cemetery, Arras.  There are almost 35,000 servicemen from the United Kingdom, South Africa and New Zealand who died between Spring 1916 and 7 August 1918, particularly during the Arras Offensive April-May 1917, who have no known grave and are commemorated on this memorial.[15] 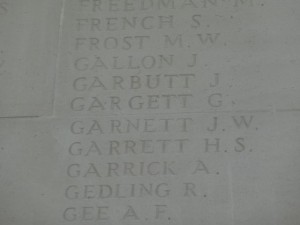 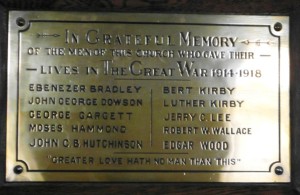 One thought on “Gargett G.”