John George Gargett was born 1890[2] at Lynesack, the son of James and Phillis Gargett.  There were at least 12 children, all born in the Parish of Lynesack and Softley:

In 1915, aged 25 years 6 months John George Gargett enlisted at Bishop Auckland into the 3rd Battalion, the Durham Light Infantry being given the regimental number 30569.[7]  This was a Reserve Battalion stationed at South Shields as part of the Tyne Garrison, a depot/training unit.[8] He underwent a medical examination was considered fit for general service. He was 5ft 3½” tall and weighed 130 lbs.[9]  His religion was Church of England.[10]

He served with the2/DLI which was a Regular Army battalion which went to France in September 1914.  It came under the orders of the 18th Brigade, 6th Division.[11]  Private J.G. Gargett entered France 24 May 1916 [12] and by then the 18th Brigade consisted of the following units:

The Battle of Flers-Courcelette: a summary

The Battle of Flers-Courcelette was notable for the introduction of tanks.  The attack was launched across a 15km front from Rawlinson’s Fourth Army salient on 15 September.  Twelve Divisions were employed along with 49 tanks (all the British Army possessed).  The attack was preceded by an artillery bombardment designed to leave unshelled lanes open for the advance of the tanks.  17 were unable to get to the start line.  A further 7 failed to work at zero hour.  Thus 15 of the 44 rolled into No-Man’s Land with the start of the attack.  The BEF together with the Canadian Corps made initial gains of some 2km within the first 3 days – something of an achievement.  The villages of Martinpuich, Flers and Courcelette fell to the Allies, as did much of High Wood.  A combination of poor weather and extensive German reinforcements halted the advance 17 September and the attack was called off 22 September. [15]

11 September:  move to Sandpit near Mealte

12 September: marched to the Citadel near Fricourt, draft of 16 men arrived, officers taken to reconnoitre the trenches which the battalion was to occupy south of Trones Wood.

13 September: 2/DLI moved 2 companies into a position known as the Triangle.  The mission was to bomb down Straight Trench which would lead into the Quadrilateral.  The battalion moved up from Trones Wood to the Guillemont-Wedgewood trench and from there to the Triangle.

15 September: The assault was timed for 1930hrs. but 2/DLI and 11/Essex were new to the ground and had scarcely got into position before it was time to start the attack.  The artillery barrage commenced but most of the shells exploded harmlessly behind the enemy positions.  At the allotted time 11/Essex advanced and came under heavy machine-gun fire from Germans in Bouleaux Wood.  2/DLI fought down Straight Trench and managed to take about 500 yards before being held up.  Nothing could be done in the dark

16 September: morning, a further advance was made.  Heavy machine- gun fire held up the attack.

Casualties had been heavy on the night of the 15 September – Captain B. Baty and Second Lieutenant R. Meikle killed and 5 other officers were wounded.  During the morning attack, Second Lieutenant L. Birtles was killed and 2 officers wounded.  Later in the day, Capt. E. Hughes died of wounds. Among the men, 30 had been killed, 99 wounded and 34 were missing.  That night a battalion of the West Yorkshire Regiment relieved 2/DLI.  The battalion moved back to Trones Wood.

Later research records that between 13 and 19 September, 2/DLI lost 2 officers and 40 other ranks killed in action or died of wounds, 2 officers (Birtles and Hughes) and 38 other ranks on 16 September including 30569 Private J.G. Gargett.[17]

Another source described the action as follows: [18]

“They [14/DLI] were in reserve with the rest of the 18th Brigade and did not come into action on September 15th when the division made a hurried and unsuccessful attack on the Quadrilateral, a German work about 1000 yards east of Ginchy.

Later on the same day, the 18th Brigade were put in to rush the Quadrilateral from the flanks and the 2nd Durham Light Infantry entered the trench called Low Road, bombed down it for 100 yards and held on.”

Private J.G. Gargett has no known grave and is commemorated on the Thiepval Memorial, the Memorial to the Missing of the Somme.  It bears the names of more than 72,000 officers and men of the UK and South African forces who died in the Somme sector and who have no known grave.  Over 90% of those commemorated died between July and November 1916, the duration of what we now call the Battle of the Somme. The memorial, designed by Sir Edwin Lutyens, was built between 1928 and 1932 and unveiled by the Prince of Wales, in the presence of the President of France, 31 July 1932.  [20]

[17] Officers & Soldiers Died in the Great War: Note: Capt. B. Baty recorded as 23/DLI and there is no mention of S/L R. Meikle 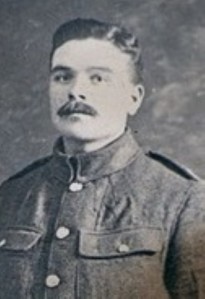 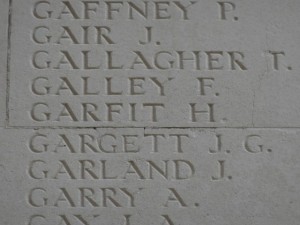 One thought on “Gargett J.G.”