The authorities planned a new camp to house POWs and this was sited some distance to the north of the WW1 Hamsterley POW camp, on the north side of the River Wear, just off the Crook to Wolsingham road.   It was known as Camp No.93, Harperley and in 1943, Italian POWs commenced building work.  In September 1943, following the surrender of Italy, repatriation of its servicemen took place and the work was carried on by German POWs.  Prior to June 1944 and the invasion of Normandy, there were few German POWs in Britain but by the end of the year there were some 144,450 in the Britain.  This figure increased to 368,300 by the end of 1946.  At its peak, there were 3.5 million Germans held in different countries.  There were 390 POW camps and about 1,500 satellites – transit camps, working camps (farming, forestry, dam, road construction) hospitals and hostels.  In the North East, the major camps were:

Those entering Britain were screened by the POW Interrogation Section and “politically graded”:

Lt. Col. Stobart was the Commandant, the Medical Officer was Dr. Alfred Charlton and the interpreters were Staff Sergeants Tony Sondheim and John Hoffer assisted by 2 reliable German POW Clerks, one being Richard Balmer.

German POWs provided labour to work in agriculture and forestry then after the war they assisted in the reconstruction and recovery programme.  The following account was provided by a former Harperley POW:

Treatment of POWs has been fair and correct.  There were counts and roll calls daily.

From their place of work, the POWs reported to camp each evening and would then be included in the roll call or count.

The labour representative would visit a farm and negotiate with the owner the term of a contract for employing a POW on the farm.  These were on a daily employment basis where the POW was transported each morning from the camp to the farm and returned each evening to the camp.  If the farm owners preferred, the POW could be treated as a billetee.  This meant he would be housed, fed and employed on the farm for a specified period.

The Foreign Office from time to time sent a team of official to screen and grade the POWs – white, grey and black.

Supplementary supplies did come in the camps smuggled trough from the farms by British and Germans alike.  The cooking and servicing of food was dome entirely by POWs – plain but adequate at arranged times.  Communication between the Camp Leader and his men was aided by the installation of a “Tannoy” system.

There was a very active theatre group in the POW compound.  The theatre was purpose built.  Design, construction and décor were the work of the POWs.

The making of ornaments, toys and leather goods was prevalent in the German POW compound.  Many of those items were given as gifts to the families of the local communities.  A model version of Noah’s Ark had been designed and made by POWs and presented to Durham Cathedral by the Camp Commandant Colonel Stobart on their behalf.

POWs who had the inhuman experience in other camps in Belgium, coming to Harperley was like coming to a 3 Star Hotel.

From October 1946, the British government actively recruited workers from Germany to help with the task of reconstruction.  By the end of 1947, the number of former German POWs had fallen to about 180,000 as they were repatriated and by the second quarter of 1948, only about 34,000 were left in Britain.  In March 1948, they had to decide whether or not to return to Germany and 25,252 former German POWs elected to stay in Britain.  Their reasons would be very personal, perhaps they had married a British girl, there were about 800 marriages, or perhaps there were no prospects for them in Germany.  Major cities such as Hamburg and Dresden had been “flattened” by Bomber Command with heavy loss of life thus they may not have known if their family was alive.  Perhaps, their part of Germany was under Soviet control and they did not want to be a part of that society.  Perhaps they had no good reason to return to Germany.

Heinz was born in Stolp which is now part of Poland.  He was forced to join the German Army at the age of 16 and he was a messenger boy going from town to town.  He was captured in France and as a German POW was aboard a ship, bound for the USA but because of chronic sea sickness, he and others were allowed to disembark in Britain. He eventually was sent to Harperley POW Camp and set to work on a farm near West Auckland.

After the war, he managed to contact with one of his sisters who lived in a town called Blesendorf.  He was told that his mother, Marie Elizabeth Augusta Kleier and his other 2 sisters, Ursula and Irene had lost their home and were moved from camp to camp.  They left Stolp and by Christmas 1946, were in Obermassfield, Thuringen in West Germany.  Later, they lived at Lustringen, near Osnbruck where they shared a room with another lady and her children.  Heinz, now known as “Harry” decided to stay in Britain because he had met an English girl, Vera Rewcastle.   He still felt responsible for his mother and 2 sisters so persuaded them to join him in Britain.  He applied for work permits for them, eventually being successful and they arrived in England in June 1949.  Harry was naturalised as a British citizen in October 1953, married Vera in December 1953 and settled in the West Auckland area, as did his mother and 2 sisters, Irene and Ursula. 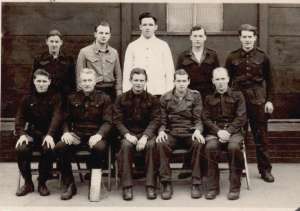 Ursula married Fred Towers and Irene married John Dixon, from Bedlington, Northumberland.  They were married in a double wedding at St. Helens Church in February 1954.

“The order was given to return to Schwerin and be taken by the Americans rather than fall into Russian hands.”

He was handed over to the British and spent 6 months at Fallingbostel POW camp which had been a Stalag for Allied POWs.  In December 1945, he was taken to Maastricht then in May 1946 to Hanover before being transported by train to Britain, to Sheffield, then Harperley then Darrass Hall, Northumberland.  He was set to work at various farms in Northumberland.  His life story is told in his book, “From Pomerania to Ponteland” 2001 and the final paragraphs state:

“I was only one of millions affected by the war – including many good Northumbrians.  Many lost family and friends then and had their lives upset.  But that happened to my family and we all wonder what if ?

I hope that the reader and especially those who were too young too remember the war, will pause and hope that nothing like that befalls them of their families and indeed do their little bit to ensure to ensure it does not.” 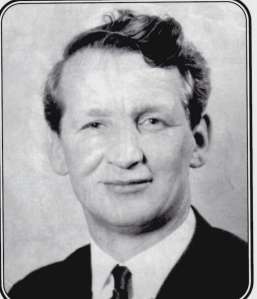 In 2004, Rudi died and his ashes were buried in the garden of remembrance at Harperley.

One of the most famous German POWs is Bernd “Bert” Trautmann, the legendary Manchester City goalkeeper.  Bert was not at Harperley but was held at camps in Lancashire, Cheshire and Derbyshire.  In November 2004, he was awarded the OBE for his work improving Anglo-German relations.  In his autobiography, he states:

“The English showed something of forgiveness.  War is war.  The war is over.  We understand how you feel.  I was born a German but in my heart I’m British.  I’m still called English even from my own countrymen in Germany.  Many people will be asking why.  But I had so much kindness, friendliness and understanding shown to me.  So I stayed.  And I’m glad I stayed.” 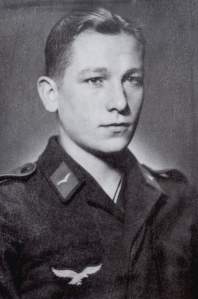 As mentioned above, about 25,000 former German POWs decided to stay in Britain and perhaps they agreed wholeheartedly with the statements of Rudi Lux and Bert Trautmann.  We will never know for certain for few will be alive to tell their tales as indeed is the case with our British servicemen and women.

25,000 men were given the opportunity to start new lives, Britain gave them all a fresh start, Heinz became known as “Harry” and Bernd became “Bert”.  No doubt, there would have been many more name changes.  Their families would have become British, aware of their past but looking to the future with hope and optimism.