24712 Private Moses Hammond, 2nd Battalion, the King’s Own Yorkshire Light Infantry was killed in action 3 April 1917 and is buried at Savy British Cemetery, France.[1]  He was 20 years old and is commemorated on the Cockfield War Memorial, the Memorial Plaque in the Cockfield Methodist Church and a family headstone in Cockfield cemetery.

Moses was born 1897[2] at Cockfield to Thomas and Elizabeth Hammond.  There were at least 5 children, all born at Cockfield:

The service record of Private M. Hammond and the war diary of the 2nd Battalion, King’s Own Yorkshire Light Infantry (KOYLI) have not been researched.  He enlisted at Darlington into the 2/KOYLI and was given the regimental number 24712.[5]  He did not enter France until after 31 December 1915.[6]

2/KOYLI was a Regular Army battalion and part of the 13th Brigade, 5th Division at the beginning of the war.  It landed at Le Havre in August 1914 then in December 1915 it was transferred to 97th Brigade, 32nd Division.[7]  The following units formed the 97th Brigade:

Private M. Hammond is buried at grave reference I.J.22, Savy British Cemetery, west of St. Quentin, France.  The cemetery was made in 1919 when graves from the battlefields and smaller cemeteries were concentrated into it.  There are over 850 commonwealth soldiers from WW1 buried here, over half are unidentified.[12] The 32nd Division formed Savy Wood North Cemetery during April and May 1917 which contained 44 British graves and it is likely that Private M. Hammond was initially laid to rest here.[13]

[5] Soldiers Died in the Great War 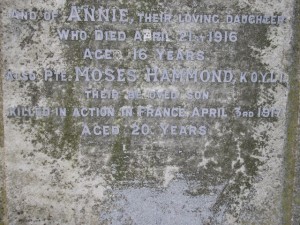 One thought on “Hammond M.”