17872 Lance Corporal Francis Hedley, 7th Battalion, Alexandra, Princess of Wales’s Own Yorkshire Regiment was killed in action 13 May 1917.  He was 22 years old and is buried at the Canadian Cemetery No.2, Neuville-St.-Vaast, France [1] and commemorated on the St. Helen’s Colliery Memorial Cottages.

Francis was born c.1895 at St. Helen’s Auckland to Robert and Jane Hedley.  There were 6 children:

All were born at St. Helen’s other than Jacob who was born at Etherley Dene, Bishop Auckland. [2]  In 1901, the family lived at Etherley Dene and Robert worked as a coal miner (hewer).  By 1911, the family lived at 1 West View, Tindale Crescent, Bishop Auckland.  Robert was working as a coal miner and sons Robert and Francis worked at the brickworks.[3]  Sometime later they lived at 20 West View.[4]

The service record of Lance Corporal F. Hedley and the war diary of the 7th battalion, Yorkshire Regiment, popularly known as the Green Howards, have not been researched.

The 7th (Service) Battalion was formed in September 1914 at Richmond and attached to the 50th Brigade of the 17th (Northern) Division.  It was disbanded February 1918.[5]  The 50th Brigade also included:

The early days were chaotic – the volunteers had few trained officers and NCO’s to command them, no billets or equipment.  However, by early summer 1915, the Division was considered to be ready for France and it landed there 12 – 17 July.  It served with distinction on the Western Front for the remainder of the war taking part in most of the significant actions.  The initial period was spent holding the front lines in the southern area of the Ypres Salient.  The 17th Division was involved in the actions indicated below up until Lance Corporal F. Hedley’s death and it is assumed that he took part. [6]

His medal card indicates that he entered the Balkan Theatre 14 July 1915.[7]  If that is the case then he must have served with the 6th Battalion, Yorkshire Regiment which came under the orders of the 32nd Brigade, 11th (Northern) Division and served in the Gallipoli Campaign of 1915.  The Division left Liverpool 30 June 1915, arriving at the Greek island of Mudros just off the Turkish mainland 10 July and invaded the Gallipoli Peninsula at Suvla Bay 6 August.  This was a bloody and costly affair which gained little.  The offensive was called off and the battalion was evacuated 19/20 December 1915.  The Division landed in France in July 1916.[8]

The 17th Division and it took part in the following actions:

The Battle of Arras 1917: an overview

The main thrust of the Allied spring offensive was to be launched on the Aisne 16 April 1917 by the French.  Commonwealth forces were to begin a diversionary attack at Arras a week earlier with the aim of drawing German forces north.  This offensive began 9 April on a 22½km. front following a 5 day artillery bombardment by 2,800 guns.  The 14 Commonwealth Divisions outnumbered the enemy but having withdrawn to the heavily fortified Hindenburg Line in the spring of that year, the German defences were strong.  In the north, the 4 Divisions of the Canadian Corps fighting side by side for the first time suffered heavy losses but scored a great victory with the capture of Vimy Ridge.  In the centre near Arras, there was an advance of 5km. but south of the river Scarpe, very little progress was made and the Australians suffered many casualties at Bullecourt, 11 April.

The arrival of German reserves and the launch of the French offensive on the Aisne delayed the second phase of the attack until 23/24 April when fierce fighting resulted in a further 1½km. advance.  The action was renewed 3 May but further gains were negligible.  The French campaign was not going well.  By the time the action was brought to a close by the end of May, Commonwealth casualties had reached almost 170,000 dead, missing or wounded. [10]

The offensive involved the following actions, amongst others:

9 – 11 May:  The 17th Division took over the front held by the 9th Division in trenches north of the Scarpe.

12 May: 6.30 am, the 4th and 17th Divisions joined an attack along the whole front.  The objective of the 17th was to advance to Cupid, Curly and Cash Trenches then onto Charlie Trench.  The 50th Brigade operated on the right with 7th Green Howards on the right and the 7th East Yorks. on the left.

“The attacking companies went forward under a very effective shrapnel barrage in two waves of two companies each “B” Company on the right of the first wave and “A” on the right of the second, each wave being composed of two lines.  “A” and “D” Companies detailed a mopping up party, consisting of one officer and 30 men from each, to clear Crook Trench which ran roughly at right angles to their objective.  Dust and smoke from the barrage made observation impossible once the attack was launched.

At 7.30am a message was received from Lieut. H.A. Wilkinson that Capt. R.W.S. Croft, “C” Company had been killed and that all objectives had been gained with the exception of the junction of Curly, Cupid and Crook Trenches and that the troops were consolidating the position.  Touch was maintained with the 1st Battalion Rifle Brigade on the right but the left had been unable to gain their objective.  Further attempts were made to secure this trench junction but by dusk it was unoccupied by either side.”

This situation was confirmed by 2/Lieut. Collins.  At 10.30pm 2/Lieut. Fox led a bombing attack and established a block in Curly Trench, north of the junction and, after encountering very heavy opposition eventually succeeded in occupying the junction.

“Incessant fighting continued all next day in the neighbourhood of the “stop” in Curly Trench.  The battalion held its own however and was ably assisted by the Stokes mortar battery firing from Crook Trench.  At 10.00pm an attempt was made to push forward northwards in Curly Trench in conjunction with an above ground attack by the 7th East Yorks. Regt.  This attack failed but Lieut. H.A. Wilkinson seconded 2/Lieut. E.V. Fox by dint of hard fighting made their way yard by yard to 100 yards beyond the “stop”.  This success was only temporary and the enemy forced us to yield ground eventually leaving us with a net gain of only a quarter of that distance.  Wilkinson and Fox were severely wounded and only 3 officers were left with the companies after this operation.  The men in the front line were becoming very exhausted and there was a shortage of drinking water.”

14 May: 4.00am, remnants of “A” Company withdrew to the Fampoux-Gavelle line and were relieved by the Dorsets.  The 3 remaining companies stayed with the Dorsets to which they were temporarily attached being heavily shelled by 4.2 and 5.9 inch shells.

“For most conspicuous bravery and devotion to duty.

Private Dresser, in spite of being twice wounded on the way and suffering great pain, succeeded in conveying an important message from Battalion Headquarters to the front line of the trenches which he eventually reached in an exhausted condition.

His fearlessness and determination to deliver this message at any cost proved of the greatest value to his Battalion at a critical period.” [16]

17872 Lance Corporal Francis Hedley is buried at grave reference 17.F.1. in the Canadian Cemetery No.2, Neuville-St.-Vaast, France. The cemetery was established by the Canadian Corps after the successful storming of Vimy Ridge April 1917.  There are nearly 3000 casualties commemorated here and 820 identified burials.  [17]

[14] Officers and Soldiers Died in the Great War 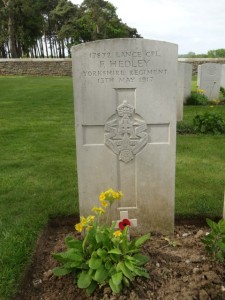 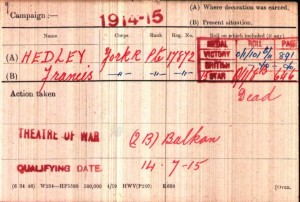 One thought on “Hedley F”