38960 Private John Hepple, 9th Battalion, Alexandra Princes of Wales’s Own (Yorkshire) Regiment died of wounds 5 October 1918 and is buried at Tincourt New British Cemetery, France.[1]  He was 35 years old and is commemorated on the Woodland War Memorial [2] and the memorial plaque in St. John the Evangelist Church, Lynesack.

John was born 1881[3] at Tow Law the son of Joseph and Margaret Hepple.  There were at least 6 children:

In 1891 the family lived at 80 Old Row, Oakenshaw near Willington, Co. Durham where Joseph worked as a coal miner.[4]  The 1901 census details for the family have not been traced.  In 1904 John Hepple married Isabella Waller at Bishop Auckland.[5] By 1911, the family lived at Woodland where John was recorded as “a green grocer own account” and Isabella “assisted in the business.”  They had 4 children, all born at Woodland:

John Hepple enlisted at Sunderland into the 9th Battalion the Yorkshire Regiment and was allocated the regimental number 38960.[7]  The Yorkshire Regiment is commonly known as “The Green Howards.”  The 9th (Service) Battalion was formed at Richmond, North Yorkshire 26 September 1914 as part of K3 Kitchener’s New Army.  It came under the orders of the 69th Brigade 23rd Division.[8]  The 69th Brigade comprised:

26 August 1915, the Division landed in France at Boulogne and fought on the Western Front until November 1917 when it moved to Italy.  In September 1918, the battalion returned from Italy to France and was attached to 74th Brigade 25th Division and took part in battles during the 100 days to victory.[10]

The service details of Private J. Hepple have not been researched therefore the date he enlisted is unknown.  Given that he was a married man with children running his own business, it is likely that he was conscripted.  He was at the front soon after visiting home in January 1917.  The battalion returned from Italy in September 1918 and enjoyed a good reputation:

The reformed Division moved back to France in September 1918, moving first to St. Riquier near Abbeville.  Later in the month it entrained to join the Fourth Army, coming under XIII Corps which was by now engaged more or less continuously advancing across Picardy.

3-5 October 1918: The Battle of Beaurevoir, a phase of the Battles of the Hindenburg Line: a summary

3 October: Marching up from between Amiens and Albert to Templeux-le-Guerard, the brigades took up positions at Ronssoy, Moislains and Nurlu.  Preparations were made to attack the enemy’s defensive line at Beaurevoir.  Fighting for the well defended position went on until 7 October by which time a 3000 yard advance had been made despite heavy casualties. [12]

3 October: the 74th Brigade was concentrated at Moislains.  13.00: 9/GH left Moislains for the line south of Le Catelet.  Late in the afternoon, orders were received to continue on October 4th the attack started by the Australians on the 3rd to complete the capture of Beaurevoir and the high ground beyond it.

4 October: by day break the 25th Division had taken up a line from Canal des Torrens to south-west of Guisancourt Farm, about 3000 yards.  The 7th Brigade opened the attack against very strong and well defended German positions with machine guns concealed in buildings and along the railway.  The attack was only partially successful and casualties were heavy.  74th Brigade moved up in the evening and took over half the front.  75th Brigade moved up to Quennemont Farm.

5 October:  6.00am the 74th and 75th Brigades went forward, 75th on the right, 74th on the left with all 3 battalions in the front line.  9/GH attacked with companies commanded as follows:

“The attack commenced well especially on the flanks where good progress was made north of the village of Beaurevoir.  The Germans at once launched a strong counter-attack supported by large numbers of machine guns  and succeeded in forcing back our troops once more to their original line except in the centre at Bellevue Farm which was successfully held by men of “A” Company, 9th Green Howards…Throughout the morning the difficulties of communications and the uncertainty of the situation as regards the progress and exact positions of the attacking troops rendered the task of artillery extremely difficult and made it impossible for the guns to give the infantry adequate support owing to the danger of shelling our own men.  Capt. Blow, 9th Green Howards led “A” Company with great skill and gallantry capturing Bellevue Farm and 30 prisoners; Second Lieutenants Sutliffe and Taylor and Company Serjeant-Major Goodison, when their company commanders were killed, themselves took command and showed fine qualities of leadership in the handling of their respective companies.  Corporal Connell with a party of men attacked and captured a strong point, while Private Canning himself captured a machine gun which was holding up the advance, he being wounded during the fight.  By the end of the day the village and the cemetery of Beaurevoir had been captured and some troops of the 74th Brigade made another attempt to reach the high ground at Guisancourt Farm but were unsuccessful.”

6 October: Guisancourt Farm was taken in the morning and was made secure against any counter attacks.  9 Green Howards moved forward and dug-in in front of it.

Later research records that the 9th Battalion, the Green Howards, lost 3 officers and 52 other ranks killed in action or died of wounds between 3 and 6 October 1918.[15]

“Pte. John Hepple of Woodland visited his home a few days ago prior to his departure for France.  His many friends were exceedingly pleased to see him looking so well.  He is in a Yorkshire Regiment and has now arrived at the front.  Before joining the army, Pte. Hepple carried on a successful grocery business at Woodland.  His wife who is the eldest daughter of Mrs. Waller, Woodland and the late Mr. John Waller, consulting engineer to the Woodland and Crake Scar Collieries, is now carrying on the business.  Mr. Hepple’s acquaintances with him God speed and hope that he will soon be back home again.”

“Mr. John Hepple the well-known fruit merchant has been home on leave from Italy.  Mr. Hepple has seen almost two years service and looks remarkably well…Mr. Hepple is a son in law of Mrs. Waller and the late Mr. John Waller, for many years consulting engineer and ? to the Woodland Collieries.”

Mr. J. Hepple, a highly respected tradesman of Woodland, has died of wounds in France.  He had seen considerable service in France then in Italy and lately in France again.  He was of a very quiet and amiable disposition.  He was for a number of years a sidesman at the Parish Church.  He was home on leave some weeks ago.  His wife was, before her marriage, Miss Waller of Woodland and she with a young family are left to mourn his loss.  Much sympathy is extended to the widow and family.”

38960 Private J. Hepple is buried at grave reference VI.H.14 Tincourt New British Cemetery, France.  From September to December 1918 Casualty Clearing Stations were posted to Tincourt and after the war smaller cemeteries and battlefield burials were concentrated at this cemetery.  There are nearly 2,000 1914-18 war casualties buried and commemorated here. [17]

Private John Hepple is commemorated on the Woodland War Memorial,  [18] the memorial plaque in St. John the Evangelist Church, Lynesack and a specific Memorial Plaque to him in the Mission Church, Woodland.

“Memorial to the late Mr. J. Hepple:  It was resolved that sanction be given for the placing of a memorial in the mission church to our late sidesman Mr. J. Hepple.”

“John Hepple Memorial unveiling would take place on 15th June at 7pm by the Rev. the Lord Thurlow.” 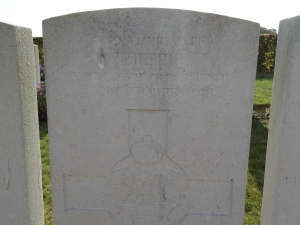 One thought on “Hepple J.”