31149 Private James Heseltine, 2nd Battalion, the York and Lancaster Regiment, was killed in action 22 April 1917 and is buried at St. Patrick’s Cemetery, Loos, France.[1]  He was 25 years old and is commemorated on the Evenwood War Memorial, the Roll of Honour, St. Paul’s Church, the Memorial Plaque in Evenwood WMC and the family headstone in Evenwood Cemetery.

James Heseltine was born 1892 [2] at Evenwood to Frank and Elizabeth Heseltine.  There were 4 children, all born at Evenwood:

William Gray of Evenwood Gate, the Hon. Secretary of the Soldiers’ and Sailors’ Fund provided Rev. G. J. Collis, vicar of St. Paul’s Church, Evenwood with a complete list of those who had enlisted in His Majesty’s Forces. The following entry is contained within the list for married men:

James Heseltine attested 3 March 1915 aged 23 years 2 months.  He was a “Territorial” serving with 6 Battalion, the Durham Light Infantry, regimental number 3487.[8]  He was “embodied” to 2/6 DLI.[9]  His medical inspection records that he was 5’6½” tall and considered fit for service.[10] Private James Heseltine served with the 2/6 DLI[11] which was a Territorial Force, formed in September 1914 and attached to the 190th Brigade, originally in the 63rd Division. These reserve units were formed up into a 2nd Line Division, initially called the 2nd Northumbrian and they remained in the North East of England as the coastal defence force for the area.  About July 1916, it was broken up and the men used as drafts or transferred to other formations. [12]  31 October 1915 he was appointed Lance Corporal and posted to 1/6 DLI.

The 6th Division landed in France in September 1914 and reinforced the hard pressed British Expeditionary Force on the Aisne before the whole army moved north to Flanders.  It remained on the Western Front throughout the war.  15 September 1916, the Division saw action at Flers, nearing the end of the Battle of the Somme. Private J. Heseltine was with 2/Y&LR at this time and would have seen action here.

Over the winter of 1916 into the spring of 1917, the 6th Division occupied positions at the La Bassee sector and on the Loos Salient.  The month of March and the first weeks of April 1917 were notable for raids and counter-raids, considerable artillery and trench mortar activity which:

“gave place to more or less continuous fighting consequent on the withdrawal of the enemy opposite the right of the Division after the successful attack by the Canadians at Vimy.”

The Diary at Appendix III informs:

“April 12th – 2nd York and Lancasters raid (2 officers and 80 other ranks under Capt. Hardy) – got into enemy trenches and killed 16 Germans.

13th – Enemy withdrew from Railway Triangle closely followed by 2nd York and Lancasters, who entered enemy dug-outs before candles had burnt out.  24th Division on our right also advancing line.  System of bombardment followed by pauses during which patrols went out and occupied what they could.

15th – a certain amount of ground gained in the face of increasing opposition – Buffs and York and Lancasters advanced a bit.” [20]

It is clear that from 13 April 1917, the Division pressurised the enemy during its withdrawal and the attacks continued:

“By this time continuous fighting, under very trying weather conditions had exhausted the 16th Infantry Brigade….  During 10 days the Division had been engaged in continuous fighting on the front of one brigade, whilst holding with the other two a front of approximately 7,000 yards.  Four battalions from other brigades, in addition to its own four, had passed through the hands of the 16th Infantry Brigade which was conducting the fighting.  Battalions relieved from the fighting front one night were put straight into the line elsewhere on the following night and battalions which had already done a long continuous tour in the trenches were relieved one night, put into the fighting front on the following night and 24 hours later had to deliver an attack.  The enemy concerned about the fate of Hill 70, concentrated a very formidable artillery on the narrow front involved and bombardments and barrages on the front of attack were of exceptional severity. ”

From 21 April, the 18th Brigade which included the 2/DLI & 14/DLI was heavily involved in operations and it is assumed that the 16th Brigade was in reserve at this time.  The 2/Y&LR War Diary has not been researched.  Private James Heseltine was killed in action 22 April 1917.[21]  Later research records that 2/Y&LR lost 20 Other Ranks killed in action on 22 April 1917.[22]  There are 6 men of the Y&LR buried with Private James Heseltine at St. Patrick’s Cemetery, Loos with the same date of death and 4 other burials for the 19 April 1917.[23] It is possible that they were all victims of German shelling.

Private J. Heseltine served a total of 2 years 51 days, the last 97 days was his second tour in France.[25]  He was awarded the British War and Victory medals. [26]

The Auckland and County Chronicle reported as follows:

“The latest victims claimed by the war are Pte. Ralph Wardle, son of Mr. & Mrs. Ralph Wardle, Evenwood Gate killed and Pte. James Heseltine, son of Mrs. Heseltine and the late Frank Heseltine, Sloat, killed.  Both prior to their enlistment were workmen at Randolph Colliery.” [27]

“Two more of our boys have fallen in action recently – Ralph Wardle of Evenwood Gate and James Heseltine, whose parents live at the Centre, Evenwood.  Both of them fell, I understand in France.  What message can one give to the relatives of these noble lads?  Our hearts are with those who sorrow for them in their sorrow but we are proud of the lads and while Evenwood remains, their names will always be an inspiration to high aims.” [28]

Private James Heseltine is buried at grave ref. I.K.16.St. Patrick’s Cemetery, Loos.  This cemetery was begun during the Battle of Loos and then used in 1916 very largely by units of the 16th (Irish) Division.  It was closed in June 1918 but then a small number of graves were brought in from the battlefields between Loos and Hulloch.  There are 595 burials.  [29]

[19] “A Short History of the Sixth Division” edited by Major General T.O. Marden.

[22] Soldiers Died in the Great War 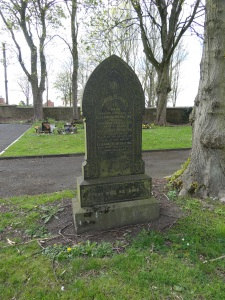