George Allan was born c.1899 at Eggleston and was the son of Thomas and Hannah Hodgson.  There were at least 4 children, all born at Eggleston:

Martha Allinson aged 16, Thomas’ step daughter also lived with the family.  Thomas worked as a lead miner/farmer.  They family lived at Foggarthwaite in the Eggleston Parish.[2]  By 1911, of the family only Thomas (father) and George Allan now aged 11 lived at Foggarthwaite.  Thomas worked as a farmer/quarryman.[3]  It is likely that George moved to Cockfield in search of work either in the coal mines or Summerson’s quarry on Cockfield Fell.

Private G.A. Hodgson’s service record of and the war diary of the 12/13th Bn., Northumberland Fusiliers have not been researched.[6]  The 12th and 13th (Service)  Battalions, the Northumberland Fusiliers were formed in Newcastle in September 1914 as part of K3, Kitchener’s New Army and came under the orders of 62nd Brigade[7], 21st Division.[8]  The battalions landed in France in September 1915 and were amalgamated 10 August 1917 becoming 12/13th Battalion.[9]  The 62nd Brigade comprised the following units:

The date when Private G.A. Hodgson enlisted and disembarked in France has not been researched and it is assumed that because of his age he was a later draft deemed necessary as a result of the heavy losses incurred by the British Army during the German Spring Offensive of 1918.  The 21st Division was in the thick of the action throughout the final year of the war and was involved in the following battles, up until the period of the death of Private G.A. Hodgson:

Both phases of the First Battles of the Somme 1918.

The August/September battles were phases of the Second Battles of the Somme 1918.[12]

Private G.A. Hodgson was killed in action 25 August 1918.  The attack took place 23/24 August so perhaps the date of his death was the day earlier.  The war diary for the 12/13 Northumberland Fusiliers is weak on narrative for this period probably due to the intensity of fighting.  A full account of the action of the 21st Division is given particularly the attack on Miraumont 23/24 August and with particular regard of the 64th Brigade:

“62nd  Brigade, which was only sent up to reinforce the left flank of 64th Brigade in the early afternoon, is the only brigade to have a full list of casualty figures, but as these are for a period covering up to ten days they cannot be considered conclusive evidence of losses for this particular battle.”[13]

The final objective was to take Miraumont and this was achieved thus the attack was a success.  There are 2 maps which indicate the area of the attack:

Private G.A. Hodgson has no known grave and is commemorated on the Vis-en-Artois Memorial.  This memorial bears the names of over 9,000 men who fell in the period from 8 August 1918 to the date of the Armistice, 11 November 1918, in the Advance to Victory in Picardy and Artois, between the Somme and Loos and who have no known grave that belong to the forces of Great Britain and Ireland and South Africa.  [18]

[4] Soldiers Died in the Great War 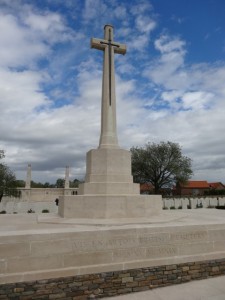 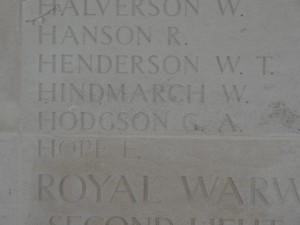 One thought on “Hodgson G.A.”