John Edward was born c.1895 at West Auckland, the son of James and Ann Hodgson.  There were at least 10 children

All the family were born either at West Auckland or St. Helen’s Auckland. In 1901, they lived in the Square.[2]  By 1911, they lived at Peases Street which was one of the terraces which made up the Square.  John’s mother Ann died aged 50 in 1906. [3]  The men all worked as coal miners, James worked a as a colliery bricklayer, Wilfred a hewer, Oliver a putter and John was a driver.[4]

John’s father James died 11 February 1916.[5]  By the end of the war, his brother George lived at Middlestone Moor, Fred at Crook, Wilfred at South Moor, Oliver at Fylands Bridge and James at High Etherley.  Maria had married and her surname was now Rowett and she lived at Darlington, Mary (Davis) lived at Spennymoor and Lily (Lewis) was at East Howle.[6]

John Edward Hodgson attested 11 November 1914 and was given the regimental number 15294.  He was 20 years 1 month and had worked as a miner. [7]  He was 5ft.4” tall, weighed 132lbs. had a fresh complexion, brown eyes and brown hair and was considered fit for duty.[8]  Private J.E. Hodgson was posted to the 7th and 9th battalions, East Yorkshire Regiment and served in France between 7 August and 3 December 1915 with 7/East Yorks.[9]

The 8th (Service) Battalion, East Yorkshire Regiment was formed 22 September 1915 at Beverley as part of Kitchener’s New Army K3 and came under the orders of 62nd Brigade, 21st Division.  It landed at Boulogne 9 September 1915 and was involved in action at the Battle of Loos, 25 September – 8 October 1915.[13]  At this time Private J. Hodgson was with the 7/East Yorkshires serving to the north of Loos in Belgium at Ypres.  The battalion was transferred to 8th Brigade, 3rd Division 16 November 1915. [14]  The following units served with the 8th Brigade:

The 3rd Division was involved in the following actions around Ypres, Belgium:

And then moved south to take part in the great Allied Offensive, the Battle of the Somme

The Battalion War Diary [16] records that:

6 July: marched to Carnoy and relieved the 6/Bedfords

8 – 12 July: fatigue parties carrying ammunition to form the Brigade Dump in the Quarry. The fighting strength was about 20 officers and 800 other ranks.

14 July:  reached point of deployment, artillery bombardment took place and was lifted 6.45am.  The assault on the enemy trenches was made but was held up by uncut wire.  The enemy opened up with machine gun and rifle fire.  Men returned to the point of assembly, others took cover in shell holes.

14-20 July: The new position was held and suffered heavily bombardment, gas and lachrymatory shells.  There were many casualties.

20/21 July:  Relieved by the King’s Own Scottish Borderers.

It is assumed that Private John Hodgson died of wounds 20 July 1916, gunshot wound to the chest, at No.2 Stationary Hospital, Abbeville.[17]  3 other ranks serving with 8/East Yorkshires died on this day. [18]  Later research confirms that during this struggle, the 8/East Yorkshires lost 6 officers and 145 other ranks, killed in action or died of wounds between 14 and 21 July.  [19]

Another workman from St. Helen’s Colliery to lose his life in this action, serving with the 8/East Yorkshires was Private T. Neal who died of wounds in No. 1/2nd Hospital Field Ambulance 22 July 1916.[20]

Private John Hodgson is buried at grave reference V.F.13, Abbeville Communal Cemetery, France.  Abbeville was the Commonwealth HQ for lines of communication.  No.3 BRCS, No.5 and No.2 Stationary Hospitals were stationed there at various times between November 1914 and September 1916.  The cemetery holds 774 Commonwealth WW1 burials and the extension holds 1,754.[21]

[9] Statement of Services and History Sheet

[18] Soldiers Died in the Great War

[19] Officers and Soldiers Died in the Great War. Note: Private T. Neal is recorded as serving with 9th Battalion and was the only soldier to have died on the 22 July but this is incorrect since he had been transferred to the 8th Battalion 7 October 1915. 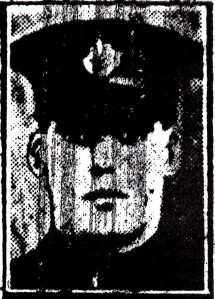