Thomas Kellett was born 1910,[2] the son of Wilfred and Margaret Kellett and brother to John William[3], Jonathan Burrell and Ernest.[4]  In 1911, the family lived at High Wham where Wilfred worked as a coal miner [hewer].[5]  In 1939, Thomas Kellett married Annie Fawcett of Scotton, North Yorkshire.[6]

The service details of Serjeant Thomas Kellett have not been researched.

By January 1943, the Eighth Army was harassing Rommel’s Afrika Korps which retired from Buerat on 15 January and withdrew from Tripoli on the night of 22/23 January after destroying the port.  He then conducted delaying actions on his retreat into Tunisia.  The 7th Armoured Division entered Tripoli 23 January 1943.  The last elements of the Panzerarmee reached the Mareth line, 200 miles west on 15 February.  The Eighth Army entered Tunisia in early March and by the 9th, Rommel returned to Germany to explain the situation to Hitler.[7]  However, the Axis forces were ordered to fight on.

20 March 1943, the advancing Eighth Army linked up with Eisenhower’s US troops and pressure mounted around Tunis, the Axis’ last stronghold.

7 May, the Allies entered the city and 5 days later 250,000 German and Italian troops surrendered.  The battle for North Africa was over.[8]

The Pioneer Corps would have been part of the lines of communication, backing up the troops in the vanguard.  We do not know the circumstances surrounding the death of Serjeant Thomas Kellett.  Since he is buried in Cairo, a centre for hospitals treating the sick and wounded, we can only speculate that he died of wounds or illness caught whilst on active service.

Father in Thy Gracious Keeping Leave We Now

The cemetery was opened in October 1941 for burials from hospitals in the area coping with the wounded and sick mainly from the Western Desert Campaigns.  There are 1,742 Commonwealth Second World War burials. 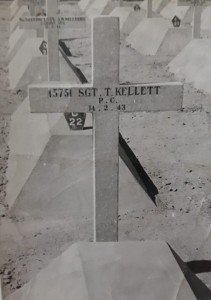