6/4012 Private Edwin Augustus Oliver, 1/6th Battalion, the Durham Light Infantry died 1 May 1916 and is buried at Longuenesse (St. Omer) Souvenir Cemetery.[1]  He was 28 years old and is commemorated on Cockfield War Memorial as Edwin O. Kirby.

Edwin was born c.1888 in Lynesack and was the son of William and Sarah Kirby [nee Oliver, born 1865 at Woodland].  There were 3 children:

In 1891, the family lived at Cockfield.  William was a coal miner [bc.1863 at Overdinsdale in Teesdale].  His family had lived at Hurworth being weavers and agricultural labourers for almost 200 years before moving to Cockfield about 1865.  Also recorded on the census was 15 year old Elizabeth Ann Oliver, William’s sister-in-law who would become his second wife in 1902 – 6 months after the death of her sister Sarah. [Edwin’s mother].

In 1901, the family lived at Cockfield.  13 year old Edwin was a coal miner.  His second sister Elizabeth is not recorded.

The 1911 census records 23 year old Edwin working as a coal miner [hewer] and living with his father William and his second wife 34 year old sister Elizabeth Ann.  There were 5 children from this 2nd marriage:

The service record and war diary of the 1/6th battalion, the Durham Light Infantry have not been researched.

The 1/6th Battalion were formed in Bishop Auckland in August 1914 as part of the Durham Light Infantry Brigade, Northumbrian Division and in May 1915 became the 151st Brigade of the 50th Division.[8] The Division moved to France 16 April 1915 and served with distinction on the Western Front throughout the war. Other battalions were:

Following heavy casualties in June 1915, the Second Battle of Ypres, the battalion merged with the 1/8th to become the 6/8th then it returned to its original identity 11 August 1915 and was then joined by:

“..relieved the 9th Battalion in N to O trenches.  The Germans commenced a bombardment of Battalion Headquarters, near Brasserie.  Sergeant W. O’Dair, Orderly Room Sergeant was severely wounded.  Private Ryder, stretcher bearer dressed his wounds and took him to the dressing station.  There were nine casualties in total.  The Canadians lost almost all of the gains at St. Eloi in severe fighting on the 21st April.  The enemy continued to shell Bois Carre and M, N and O Trenches, as part of this counter action.  This heavy shelling continued the next day, with British artillery countering with vigour.  The Battalion was relieved by the 7th Battalion…….on the 24th of the month, an intensive training programme was commenced which was to last until the 8th of May.” [19]

“Thy will be done”

Family details from the 1891, 1901 & 1911 census have been provided by a family member which rectify assumptions incorrectly made.  Amended 7 February 2017. The settlement of Overdinsdale in Teesdale is given as the place of birth for William – I suggest that this may be Low Dinsdale to the immediate north of the river Tees, south of Darlington and east of Hurworth.

[12] Soldiers Died in the Great War

[13] Officers Died in the Great War 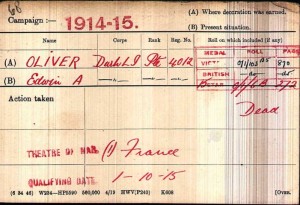 One thought on “Kirby E.O.”