50144 Private George William Lambert, 17th Battalion, the King’s (Liverpool Regiment) died 30 January 1918 and is buried at Ham British Cemetery, Muille-Villette, France.[1]  He was about 19 years old and is commemorated on the Cockfield War Memorial.

George William was born 1898[2] at Middlestone Moor near Spennymoor, the son of Fred and Emily Lambert.[3]  There were 3 children:

In 1911, the family lived at Cockfield (no specific address).  By this time Fred was a widower.  He was the “village bobby” – a police sergeant.  PC Francis Dent lodged with the family.[4]  At one time, G.W. Lambert was employed as a booking clerk at Cockfield Station.[5]

The 17th (Service) Battalion (1st City), the King’s (Liverpool Regiment) was formed in August 1914 by Lord Derby and it had the distinction of being the first “Pals Battalion”.  The battalion came under the orders of the 89th Brigade, 30th Division and in November 1915 it landed at Boulogne, France. [7]  Units in the 89th Brigade were:

The Division fought on the Western Front throughout the war seeing action in 1916 at the Battle of the Somme, Battles of Albert and Transloy Ridge and in 1917 the Pursuit to the Hindenburg Line, the Arras Offensive and the Battle of Pilkem Ridge, part of the Third Battle of Ypres. [8]

Private G.W. Lambert was the only soldier serving with the 17/Liverpool Regiment to die 30 January 1918.[9]  There was no major action taking place on that date and it is possible that he died of sickness.  The circumstances surrounding his death will remain unknown until his service record is researched.

“Police Sergeant Lambert of Cockfield has received notification from the War Office that his son who was on active service died at a clearing station in France on 30th January.  The deceased at one time was booking clerk at Cockfield Station.”

[9] Officers and Soldiers Died in the Great War 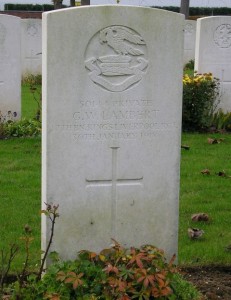 One thought on “Lambert G.W.”