2316 Private H. G. Lennox, 6th Battalion, Australian Infantry, Australian Imperial Force was killed in action 7 August 1915 aged 18.  He has no known grave and is commemorated on the Lone Pine Memorial, Gallipoli, Turkey,[1] the Australian War Memorial, the Corryong War Memorial and on the family gravestone in Corryong Cemetery, Victoria, Australia. [2]

Horace Gilchrist Lennox was the son of Hugh and Margaret Lennox.  There were 6 children:

Hugh Lennox was a policeman in Corryong and served the district on 2 occasions, the second time for a period of 11 years until 1906 when he was transferred to Mitta Mitta.  It was there that he was injured as a result of a horse riding accident.  He died the following day, 15 March 1907 aged 43 and is buried at Corryong Cemetery, Victoria.

Horace’s maternal grandfather was one of the regions early “selectors”.  When Australia was first opened up for settlement free settlers or ex-convicts could lease large areas of crown land for £10 and these people were called squatters.  In the 1860’s following large scale immigration during the gold rush the government introduced schemes to assist people to farm on smaller areas of land eg. 320 acre blocks.  These people were selectors as they selected and purchased land that had previously been held by squators.  Many squators purchased land they had previously leased.  Margaret’s father purchased land near what is now Corryong in 1866.

Horace’s mother Margaret evidently re-married being Margaret Dignan at the time of his enlistment.  She then lived at 75 Bowen Street, Moonee Ponds, Melbourne.

14 April 1915:  Horace Gilchrist Lennox attested.  His “apparent” age was 18 years of age.   His mother, Margaret Dignan and step-father signed his attestation paper in order to permit his application to serve, as was required.  He stood 5’7½” tall and weighed 10st. 6lbs.  He worked as a farm labourer.  Margaret Dignan lived at 75 Bowen Street, Moonee Ponds, Melbourne, Victoria.

His service record is as follows:

A Court of Enquiry held 24 April 1916 confirmed this to be the case as evidenced by statements from 3 witnesses:

“On 6th August 1915 at midnight at Gallipoli Peninsula, Lennox was killed.  An attack was made on German trenches, which were named “German Officers’ trenches” as German officers were seen massing there at one time, which were not taken and on No Man’s Land he was killed.  They never got into the trenches so could not have been taken prisoner but he was never seen after the attack.  Two men gave this information and say they belonged to a draft of 150.  They left Mellisuine on June 17 1915 and landed on arrival at Gallipoli climbed the hill and made the attack and next morning only 30 out of the 150 draft answered the roll call.”

By early 1915, the war on the Western Front had reached a stalemate. While lines of trenches stretched through Flanders and France, Russia was struggling to resist the forces of Germany and Austria-Hungary in the east. In response to a request for aid from its ally, the British government sanctioned a plan to attack the Ottoman Empire. On 25 April, Commonwealth forces landed on the Gallipoli peninsula and met fierce Ottoman resistance. Men from across the British Empire, along with their French allies, fought across the peninsula: from Helles in the south, through the ridges and gullies of Anzac, to the plains of Suvla in the north. Unable to break the deadlock, Allied forces had evacuated the peninsula by early 1916, leaving their fallen comrades behind.

The August Offensive was the last major attempt made by the Allied forces at Gallipoli to break the stalemate that had persisted since the landings on 25 April 1915. The plan involved a serious of thrusts being made out of the ANZAC position to seize high points along the Sari Bair range, which dominated the Gallipoli peninsula. These operations would be supported by several diversionary attacks along the existing ANZAC frontline.

The offensive began with a diversionary attack at Lone Pine on the afternoon of 6 August 1915, which succeeded in taking a heavily defended complex of Turkish trenches but cost the lives of 2,000 men of the 1st Infantry Brigade. The main attacks – directed at Chunuk Bair, Hill Q and Hill 971 – followed that night, but although the first two features were held for short periods of time, the attacks had failed by 10 August.

Several smaller diversionary attacks were mounted on the morning of 7 August and all ended in heavy casualties. The most costly was the attack on the Nek, immortalized by the film Gallipoli, in which in 375 of the 600 attackers became casualties.

On 7 August British forces were also landed at Suvla Bay to establish a base area to sustain the ANZAC position throughout the coming winter. When they had secured Suvla Bay, the British had planned to assist the main attack, but after suffering heavy casualties they were unable to take the heights above Suvla. The need to link the positions at Suvla and ANZAC resulted in the last phase of the August Offensive – the attacks on the Hill 60 area that took place between 21 and 27 August.

The Attack on Lone Pine[6]

Given the losses and the savagery experienced at Lone Pine during that battle, it is something of a shock to realise that it was called a ‘demonstration’ or a ‘feint’. To the north, along the ridge, at such places as German Officer’s Trench and the Nek, other attacks resulting in great loss of life were also called ‘feints’. Feint is defined in the Shorter Oxford Dictionary as a ‘sham attack’, designed to engage the attention of the enemy from some larger and more central action taking place elsewhere. These attacks at Anzac were part of a plan known as the ‘August Offensive’. This offensive aimed at nothing less than victory at Anzac by driving the enemy from the heights of Chunuk Bair and positioning the Allies for an advance across the peninsula in the Turkish rear. In this way the original objective of seizing the Straits of the Dardanelles would be achieved and the Royal Navy sail triumphantly through to Constantinople.

During the planned offensive Chunuk Bair and Koja Temen Tepe (Hill 971), a higher peak further north, were to be seized in a complex set of actions involving New Zealand, Australian, British and Indian troops. They would carry out a night march to their attacking positions from the North Beach area of Anzac after sunset on 6 August 1915. That same evening, a British force would land even further to the north at Suvla Bay and begin pushing its way inland across the plain. To cover these movements, and to make the Turks think that the main attack was happening elsewhere, the biggest ‘feint’ of all was planned for Lone Pine. At the Pine the men of the Australian 1st Division would assault the central stronghold of the whole Turkish line and capture its forward trenches. If the the attack were convincing enough, so it was believed, the Turks would think that this was a major effort to break through their lines. Consequently, they would throw into the recapture of such a significant position their main reserves so drawing them away from the main assault at Chunuk Bair and Koja Temen Tepe.

The ‘demonstration’ opened at 4.30 pm on 6 August 1915 with a one-hour bombardment of the Turkish trenches. Previous bombardments had destroyed many of the barbed-wire entanglements that the Turks had placed out in front of their line in no-man’s-land. As the bombardment proceeded the men of the attacking battalions – the 2nd, 3rd and 4thBattalions, all from New South Wales – packed into the Anzac forward positions. Packs had been dumped to the rear and each man wore a white arm-band or a piece of white material attached to his back. This was to help tell friend from foe in the close fighting in the Turkish trenches that would soon be upon them:

“The men chaffed each other dryly, after the manners of spectators waiting to see a football match. Some belated messenger hurried along the trench to find his platoon, and, in passing, recognised a friend. ‘Au revoir’, Bill’, he nodded, ‘meet you over there’. ‘So long, Tom’, was the answer; ‘see you again in half an hour”.

Birdwood went on to describe what became the main feature of the Lone Pine battle. This was the Australian defence over the three days and nights of what had been won as the Turks, as anticipated, threw their reserves into numerous counter-attacks to regain their lost trenches. Both sides, as Birdwood wrote, lost heavily – ‘ … we dragged a thousand corpses out of the actual trenches which gives some idea of the fighting and was irrespective of the large numbers lying around outside’. The presence of the dead and dying all around in the confined spaces of the Pine was something that those who fought there never forgot.

“I thought the best thing would be for me to be down in this trench that had no men in it at all, where the bodies were, because I felt that the counter-attack could come at any time. I’d hardly got into position before an absolute avalanche of bombs fell, puncturing these bodies, and up on top you’d hear the air coming out of the ones up there. I think they were aiming for the bodies that they could see. I was sheltering behind them, and I was there for all that day and the next night, then suddenly it all stopped, just like that…”

The fighting at Lone Pine for both sides during these Turkish counter-attacks was all about throwing bombs across hastily erected barriers, dashing around corners in trenches and getting off a few rounds at the shapes of advancing men, slipping over the dead and avoiding the dying and wounded. For the Anzacs, the action revolved around holding on to half a dozen such barriers erected during the attacking phase on 6 August and the network of Turkish trenches seized at that time. Dozens of small-scale actions were fought on 7, 8 and 9 August to hold back the brave and determined Turkish efforts to drive the Australians back out of their Lone Pine positions. This was the battle context for the award to seven Anzacs during this period of the Victoria Cross. In every way the story of how these awards were gained by these soldiers is typical of the actions carried out by hundreds of soldiers who fought at Lone Pine but who received no official recognition of their courage. Proof of this can be found in the pages of Charles Bean’s two chapters on the Lone Pine battle from his The Story of Anzac, Vol II – ‘The Attack Upon Lone Pine’ and ‘The Counter Attack at Lone Pine’. That said, the VC stories are stories of high courage and fully deserve to be told in memory of the VCs themselves.

Private H.G. Lennox is commemorated on the War Memorial at Canberra, the Corryong War Memorial and the family headstone in Corryong Cemetery, Victoria.  It is noted that the Corryong district was fully supportive of the war.  Over 3,500 men enlisted from north east Victoria in the Great War one of the highest rates recorded in Australia.  In 1916  the government tried to introduce conscription, Corryong, an isolated community of mainly British stock loyal to the Empire, proudly recorded the highest ‘yes’ vote in Australia.  However conscription was overall rejected in referendums.

[2] The commemoration on his father’s headstone records that Lennox was 17 years old.  CWGC records his age as 18. 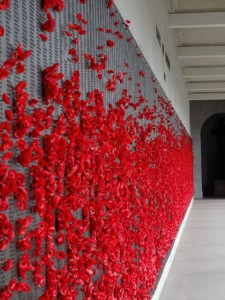 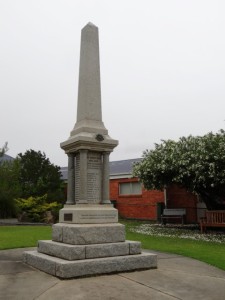 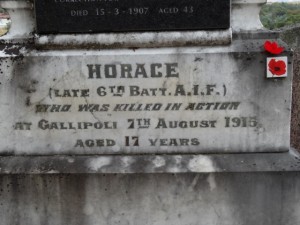