William Lowther was born 26 February 1892 at Butterknowle [3] the son of William and Margaret Lowther.  There were at least 8 children: [4]

In 1891, the family lived at Pinfold Lane, Butterknowle and William worked as a “grocer/draper.” [5]  By 1901, the family had increased to 7 children, none recorded as in employment.  William was employed as a “grocer/drapers assistant.” [6]  By 1911, the family lived at Copley Lane, their oldest children Hilda and Charles were not at home and William worked as a “grocer.”  19 year old son William is recorded simply as “assistant” which may be meant to read “grocers assistant” in which case he may work with his father who was self-employed (recorded as “own account”).  11 month old grandson Cecil Lowther lived with the family. [7] William married Nora Mary Parkin 9 February 1916. [8]  By 1917, they lived at Copley House, Butterknowle. [9] After the war, in 1921 Nora Lawther married John E. Nicholson [10] and lived at 2 High Tenters Street, Bishop Auckland. [11]

William Lowther attested 3 December 1915 aged 23 years and 9 months.  He was 5’8½” tall.  His religion was recorded as Church of England [12] He joined the Army Reserve. William Lowther undertook a medical examination 29 June 1916 at Sunderland when aged 24 years 4 months and was considered to be fir for military service although “had a tendency to flat feet but a good walker.”[13] He was allocated the regimental number 99995.

The 5th Battalion, the Yorkshire Regiment, (the Green Howards) was a Territorial Force as part of the York and Durham Brigade, Northumbrian Division.  17 April 1915 the Division landed at Boulogne, France and in May 1915 came under the orders of the 150th Brigade, 50th (Northumbrian) Division.  In 1918, units in the 150th Brigade were:

The Division saw action on the Western Front from April 1915. [18] The 5/Green Howards who with the rest of the 50th Division had suffered heavily as the German spring offensive took effect.  Between 22 March and 12 April 1918, the battalion suffered 698 casualties.  The Division was taken out of the line and transferred to what was claimed to be a “quiet sector of the line.”

25 April: detrained at Fismes now in the British IX Corps under the French Sixth Army behind the ridge known as the Chemin des Dames.  [19]  What was wholly unexpected was a German assault on this part of the line.

The attack was launched early 27 May with a ferocious heavy artillery bombardment of 4,000 guns across a 40 km front, against four divisions of IX Corps.  Owing to the heavy concentration of primarily British troops in front-line trenches, casualties from the bombardment were severe; IX Corps itself was virtually wiped out.  The bombardment was accompanied by a gas attack, designed to disable defensive gun crews, after which 17 divisions of German infantry, under Crown Prince Wilhelm, began their advance through a 40 km gap in the Allied line.  With the Allied forces entirely taken by surprise, the rapid progress of the German troops was reminiscent of the more fluid war of movement of the opening months of the war.  Between Soissons and Reims the Germans broke through a further eight Allied divisions, four British, four French, reaching the Aisne in under six hours.  By the end of the first day the Germans had gained 15 km of territory and had reached the River Vesle.  By 30 May the Germans had managed to capture 50,000 Allied soldiers and 800 guns, arriving within 90 km of Paris by 3 June.  Once again a German victory seemed probable.  However, as before, problems with supplies and reserves, and troop fatigue, in addition to prolonged Allied counter-attacks, halted the German advance at the Marne.  By 6 June the German advance had run out of steam.

French casualties were heavy, with 98,000 losses; their British allies suffered 29,000 casualties.  General Duchene was dismissed by Petain, amid an atmosphere of crisis in Paris.  Petain’s own position was placed under threat, with his role being made subservient to that of the recently promoted Allied Supreme Commander, Ferdinand Foch.

“About 1am on the 27th the enemy bombardment opened with every kind and calibre of shell, including gas, heavy casualties were caused in the forward posts on the plateau and nearly all rearward communications were cut within a very short time.  No infantry attack, however, developed against the 150th Brigade front from the north but as a result of the successful advance made by the enemy on the right of the divisional front and through the 22nd French division on the left, the plateau was enveloped on both flanks by about 6.30am.  The hostile barrage was maintained to the last and many men were in all probability captured before they could leave their deep dug-outs.”[22]

The War Diary records as follows:

Missing include 2Lt. W. Lowther and 25 officers and 638 other ranks.

“The losses, especially in missing, had been again terribly heavy: 9 other ranks only were actually reported killed, while Captain P.D.J. Waters and 11 men were reported wounded; but the “missing” amounted to 25 officers and 638 non-commissioned officers and men – in all 684 all ranks.” [23]

Second Lieutenant W. Lowther had served a total of 38 days in France.  He was awarded the British War and Victory medals. [25]

Second Lieutenant’s wife Nora Mary Lowther had heard through 2nd Lt. W. Patterson that her husband had been killed bur seemingly by September 1918 had received no confirmation so wrote to the military authorities.  Enquiries regarding missing officers were made via the Red Cross through the Netherlands Legation without result.

Lt. Lowther was my Platoon Officer.  I saw him shot by a bullet when we were surrounded on May 27th 1918.  He was with me on my post, the left hand post of the Battn. all the time of the bombardment.  When we saw the Jerries closing in he got on to the parados, was shot and fell into a shell-hole.  I saw him lying there face downwards.  I think from the way he fell that he was killed.  He wasn’t above 6 yards from me.  The Germans were all around us and would not let me stay to look further.  I believe it was his first time in the line.”[26]

It was probably 27 February 1919 that Second Lieutenant was finally presumed dead due to the lapse of time missing.[27]

Second Lieutenant W. Lowther has no known grave and is commemorated on the Soissons Memorial.   The Memorial commemorates almost 4,000 officers and men of the United Kingdom who died during the Battles of the Aisne and the Marne in 1918 and who have no known grave. [28]

[9] Application for Admission to an Officer Cadet Unit

[15] Application for Admission to an Officer Cadet Unit

[24] Officers and Soldiers Died in the Great War 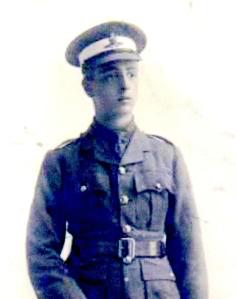 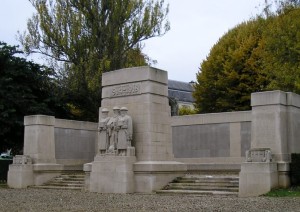 One thought on “Lowther W.”