17196 Private James Marshall, 8th Battalion, the East Yorkshire Regiment was killed in action 31 March 1916 and is commemorated on the Ypres (Menin Gate) Memorial. [1]  He was 28 years old.  To date a local commemoration has not been located.

James Marshall was bc.1887 [2] at Evenwood, the son of George and Margaret Marshall.  There were at least 5 children: [3]

By 1891, the family lived at Chilton and in 1901 they lived at 17 Back Mainsforth Row, Chilton where 52 year old George worked as a coal miner [hewer] as did 15 year old James.[4]  In 1907, James married Annie, the marriage was registered at Sedgefield.[5]  In 1911, James and Annie lived at Church Street, Bishop Middleham and they had 2 children both born at Fatfield, Co. Durham:[6]

They lived at Fatfield between 1909 and 1910 then moved to Bishop Middleham.  Later records confirm that he was the son of George and Margaret Marshall of Lindon Terrace, Chilton Lane, Ferryhill, Co. Durham and husband of Ann Marshall, 45 Castle Street, Fatfield.[7]

The service records of Private James Marshall have not been traced.  He served with the 8th Battalion, the East Yorkshire Regiment and was given the service number 17196.  He enlisted at Wallsend.

The 8th Battalion, the East Yorkshire Regiment was formed 22 September 1914 as part of K3 and attached to the 21st Division as part of the 62nd Brigade along with:

The Battalion was then transferred to the 3rd Division, 8th Brigade 16 November 1915 where it joined the following units:

The Division was involved in action at St. Eloi Craters between 27 March and 16 April 1916 but the 8th Brigade was not involved.  It was still at the Bluff where offensive operations took place between 14 February and 2 March 1916.

“The Bluff is an artificial height created by the dumping of spoil when the Ypres-Comines Canal was excavated. In this low-lying area, and on the northern bank of the canal, it gave a considerable observation advantage to the troops occupying it. In the afternoon of 14th February, German infantry successfully attacked the British units holding the Bluff, after a very heavy bombardment with shells and trench mortars, and the blowing of some mines.

Preparations were made to recover this important area, although they were slowed by severe weather. In the early morning of 2nd March, after a short bombardment which destroyed the enemy’s defensive works, British infantry over-ran the position and consolidated it, at a cost of 1,620 casualties.

No further infantry actions were undertaken by either side until June 1917, although violent mine warfare remained a feature of this troublesome spot.” [8]

Private James Marshall was killed in action 31 March 1916.  He has no known grave.  The circumstances of his death are unknown.  A total of 11 soldiers from the battalion were killed in action on that day and it is assumed that they were casualties of the normal violence of warfare.[9]

Ypres Menin Gate Memorial:  Ypres (now Ieper) is a town in the Province of West Flanders, Belgium.  The Memorial is situated at the eastern side of the town on the road to Menin (Menen) and Courtrai (Kortrijk).  The Menin Gate is one of 4 memorials to the missing in Belgian Flanders which cover the area known as the Ypres Salient which stretched from Langemarck in the north to Ploegsteert Wood in the south.  The Salient was formed during the First Battle of Ypres in October and November 1914.

The site of the Menin Gate was chosen because of the hundreds of thousands of men who passed through it on their way to the battlefields.  It commemorates those of all Commonwealth nations (except New Zealand) who died in the Salient and in the case of British casualties, before 16th August 1917.  (Those UK and New Zealand servicemen who died after that date are named on the memorial at Tyne Cot.)  The memorial was designed by Sir Reginald Blomfield and was unveiled in July 1927 by Lord Plummer.  The Ypres Menin Gate Memorial bears the names of 54,344 officers and men whose graves are not known.

Private James Marshall is commemorated at panel 21 and 31. 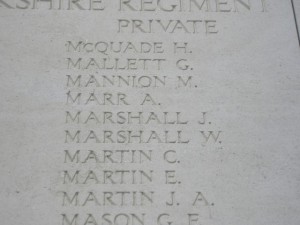 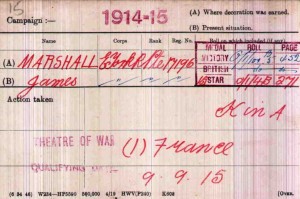