2587 Private Joseph McGuire 1/9th Battalion, Durham Light Infantry was killed in action 14 July 1915 and is commemorated on the Ypres (Menin Gate) Memorial, Belgium. [1]  He was 28 years old, the son of James and Bridget McGuire of Witton Park and husband of Jane McGuire of West Stanley.

Joseph was born 1887 in Ireland, [2] the son of James and Bridget McGuire who lived at Witton Park, near Bishop Auckland, County Durham.  In 1891, 24 year old Bridget lived with her mother Catherine Docherty at 10 Thompson Street, Witton Park with her young family:

All children were born in Ireland.[3]  At this time, their father 30 year old James was living and working in the upper Gaunless Valley, near Woodland.  He boarded with Owen and Mary McQuillan and their family along with Patrick Boylan and Michael McCoy.  Owen, Patrick, Michael and James were all Irish and they worked as coal miners and coke drawers at Crake Scar Colliery and lived in an isolated settlement called Crake Scar Huts where there was a strong Irish contingent.[4]  By 1901, 39 year old James lived with his wife Bridget and their children at the Old Brewery, Stanley, County Durham.  He worked as a coke drawer.  Their children were:

The service record of Private J. McGuire has not been traced and the 9/DLI war diary has not been researched.  The 1/9th DLI was a territorial battalion and in August 1914 it was raised at Gateshead as part of the DLI Brigade, Northumbrian Division.[12]  The battalion landed in Boulogne in April 1915 and became part of the 151st Brigade in the 50th (Northumbrian) Division in May 1915.  At that time, other battalions in the 151stBrigade were:

By 23 April 1915, the Division was at Steenvoorde and arrived just as the German Army attacked nearby Ypres using poison gas for the first time.  The Division was rushed into battle and took part in the following engagements, the Second Battles of Ypres:

Private Joseph McGuire arrived in France 14 April 1915[14] and survived this baptism of fire but was killed in action 3 months later, 14 July 1915.[15] The 151st Brigade occupied trenches to the south of Ypres opposite Messines Ridge and in front of Kemmel Hill.  Enemy shelling and sniping were constant threats but then there was the underground war.  The Germans blew a mine under a sector of trenches immediately to the north and very close to the battalion’s position.  In total 5 men were buried and despite rescue attempts, all were dead when their bodies were uncovered. [16]  Private J. McGuire and 4 other men were killed in action that day.  The others were:

All of whom enlisted at Chopwell, County Durham [17] and all of whom have no known graves and are commemorated on the Ypres (Menin Gate) Memorial. [18]

[2] Soldiers Died in the Great War

[17] Soldiers Died in the Great War 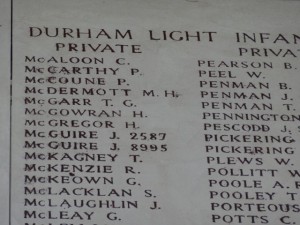 One thought on “McQuire J”