John Thomas was born c.1872 at Evenwood to William and Elizabeth Milburn.  There were at least 5 children, all born at Evenwood:[2]

Statement of the Services

The 177th Tunnelling Company was formed in June 1915 at Lestrem and moved to the Wytschaete area so it appears that Sapper John Thomas Milburn was one of the original recruits.  In November 1915, the company moved to Railway Wood where it remained for 2 years. The Company was engaged in works for the British Second Army as follows: [9]

His death was reported in the Evenwood Parish Magazine:[10]

“Another name I should like to mention among those who have given their lives for England is that of John Thomas Milburn, of the Royal Engineers.  He wasn’t actually a parishioner as he lived at Shildon where he leaves a widow and 5 children I am told.  However he was brought up in Evenwood and his mother and sisters are well known and much respected members of our community.  Our sympathies are with them too for though it is a noble thing to die for ones country, yet the personal loss is very grievous and bitter to those who have loved them for so long.  John Thomas Milburn did not actually fall on the battlefield.  He died in hospital in France from ague contracted, I understand from the particular nature of his work on active service.”

Etaples Military Cemetery:  Etaples is a town about 27km south of Boulogne, Pas de Calais, France.  During the First World War the area around Etaples was the scene of am immense concentration of Commonwealth reinforcement camps and hospitals.  It was remote from attack other than aircraft and accessible by railway from the northern and southern battlefields.  In 1917, 100,000 troops were camped among the sand dunes.  The hospitals could deal with 22,000 wounded or sick.  The cemetery contains 10,773 Commonwealth burials of the First World War. Sapper J.T. Milburn is buried at grave reference VI.E.6.

157781 Sapper William Hull Bagley is another local man to be killed in action whilst serving with the 177th Tunnelling Coy, the Royal Engineers.  He died 4 July 1917 and is buried at grave reference XXVII.D.16, New Irish Cemetery near Ypres and is commemorated on the St. Helen’s Colliery Memorial Cottages roll of honour and West Auckland War Memorial.[12] 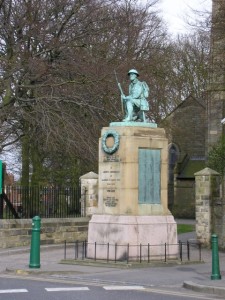 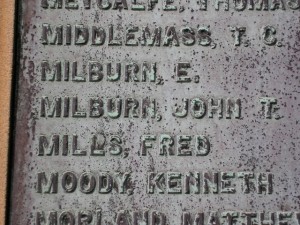 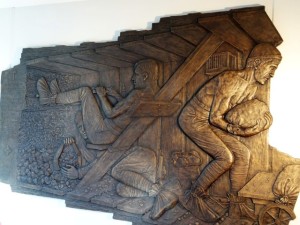