11905 Private Wilson Million, 2nd Battalion, the Durham Light Infantry was killed in action 9 August 1915 and is commemorated on the Ypres (Menin Gate) Memorial, Belgium, [1] the Etherley War Memorial and on the Roll of Honour, St. Cuthbert’s Church.  He was 32 years old, married to Betsy and had 2 children.

Wilson was born in 1882 [2] at Evenwood to Thomas and Mary Million.  There were 8 children:

The 1891 census shows that they family lived at George Street, Coundon with their sons Thomas, Wilson, Fred, Harvey and daughter Grace.  By 1901 they had moved to Toft Hill and Joseph, George and Jane had been born.  In 1909, Wilson married Betsy Thompson at Newcastle.[4]   They lived at 1 Thorne Terrace, Walker Estate, Newcastle-upon-Tyne.  The 1911 census records that Wilson and Betsy lived at 7 Ada Street, Byker and had 2 children, 4 year old Harold Thompson and 1 year old Eva.  Wilson was employed as a coal miner (hewer). [5] Later Betsy lived at 86 Scarborough Road, Byker, Newcastle-upon-Tyne. [6]

The service record of Private W. Million has not been researched.  The 2nd Battalion, the Durham Light Infantry came under the orders of the 18th Brigade, 6th Division.  Other units were:

10 September 1914: The 6th Division landed at St. Nazaire, France and proceeded to the Western Front where it remained throughout the war.  It arrived in time to reinforce the BEF on the Aisne before the whole army was moved north to Flanders. [8]

2/DLI was involved in the following actions up until the death of Private W. Million:

5 January 1915: Private W. Million entered France [10] so he did not see action at Aisne and Armentieres.  He probably was in the line on the night of the 31 May/1 June 1915 when the 6th Division took over its new front in the Ypres Salient.  At this time the 6th Division formed part of the V Corps of the Second Army when the First and Second Armies were bearing the brunt of the fighting along the British front.  The coming of June 1915 brought a comparative lull along the southern British front until the middle of the month. However a new German weapon – incendiary rifle ammunition was introduced.

“These bullets were said to be filled with sulphur which ignited on discharge and continued to burn during flight.  The clothes of soldiers lying between the lines had thus been set alight, the severity of any wound caused thereby being inevitably increased.”

The Division stayed in this sector until the end of July 1916.  Trench casualties doubled immediately – battle casualties during the whole period amounted to 10,938. The British Army was still small and woefully under-gunned but increased French pressure led to it playing an increased role in offensive operations.

The 6th Division was involved in the August operations when a surprise attack regained all of the lost ground of previous months.  The 2/DLI was involved at Hooge and fought with distinction particularly, 9 August 1915.  The following passage describes the action and pays tribute to the 2/DLI:

“It was a day which the honours fell to the guns and the junior officers and men.  Where many units distinguished themselves it is perhaps invidious to single out one for special attention but it is impossible to record this episode in the epic of Hooge without emphasizing the part played by the magnificent battalion to whom fell the honour of assaulting the centre of the position about the crater across the Menin road, close to the ruins of the chateau.  The 50 yards which lay between them and the crater was on the rising ground and crossed and re-crossed by shattered trenches of previous positions, ploughed into holes by shell-fire, encumbered with dead bodies as grisly reminders of earlier fights, sown with barbed wire entanglements and commanded by machine-gun fire from German strongholds.  Without the preliminary bombardment and the continued protection of the guns it was impossible that any man could have covered that journey and lived.  The battalion made sure of its ground in the dark before the moment came to charge by deliberately working its way to the very edge of its own protecting curtain of fire risking annihilation in the event of the slightest mistake of the part of our gunners.  Thus when the curtain was suddenly lifted the men were well within striking distance of the enemy’s positions and the rest for the time being was comparatively easy, thanks in no small measure to the battalion’s bombing parties, who accounted for most of the Germans still holding out.  It was while commanding these bombing parties that Temporary Second Lieutenant Kenneth Storey of the 2nd Durham Light Infantry – the awards for Hooge now permitting us to mention this gallant battalion by name – won the Military Cross.

“The success of our attack and the subsequent holding of the position,” it is therein acknowledged, “was largely due to the coolness and dash of the battalion bomb-throwers under Second Lieutenant Storey” who was wounded while directing his men.  In the long hours of endurance which followed when the Germans in revenge turned all their available guns on what was becoming little less than a shambles, these men from Durham, miners and the very salt of the earth in the hour of danger, held on in the face of fearful losses.  Twelve of their officers were killed or wounded before they were finally relieved.  It is recorded that when at nightfall the order was sent for them to withdraw, the advance section of the battalion did not receive it, some 200 men with 4 surviving officers, clinging throughout the night to the ridge between the crater and the stables, where the struggle raged as furiously as anywhere.  Nothing shows the spirit of this battalion than the simple official record of the conduct of Lieutenant Gerald Sopwith, one of the 4 officers of the 2nd Durham Light Infantry to be decorated with the Military Cross for this fine feat of arms:

“Although blown several yards by a large shell, wounded in the shoulder and slightly in the leg, he refused to leave the firing line, taking command of his company when the commander had been badly wounded and another officer killed.  At a critical moment he left the trenches under heavy fire, rallied and led back some men who were retiring owing to a misunderstanding.  At 5a.m., August 10, he was again wounded and his jaw broken.  He had to lie down but continued to command and encourage his men till he was relieved.”

Of the D.C.M.’s awarded for this action seven at least fell to the share of the non-commissioned officers men of the same Durham Light Infantry.  The longest ordeal of all fell to Lance Corporal J. G. Smith, who was posted with a handful of men in the recaptured ruins of the stables on the extreme right of the line and could not be reached when at last the order came to withdraw.  By midday on the 10th all other troops in the vicinity had retired but Smith collected about 24 men and still held on under continuous bombardment until 7.30p.m., declining to yield, merely sending back, long after his party had been given up for lost, for more bombs and reinforcements and only withdrawing when other troops relieved him.  For their share of this heroic episode the D.C.M. was awarded not only to and Lance Corporal Smith but also Corporal J. Gott and Private R.D. Howse both of whom though receiving permission to withdraw, refused to quit their post of danger till relieved.  Other D.C.M.’s were won by Lance Corporal O. Manley, Serjeant J. Gibbens and Private H. Hirst, all of the same battalion, for various deeds of dogged courage in the course of the engagement, Company Serjeant Major C. Kent earning the rarer distinction of a clasp to the same medal won by him for conspicuous gallantry in an earlier action.” [11]

Going into trenches at Hooge on 5th Aug.  CAPT. D.L. BRERETON (2nd in command) & LT. W.D. POTTS (Cmdg A Coy) were wounded and LT. J. KENTCcmdg C Coy) was killed.  The battn took over trenches from the 14th Divn & made preparations for an attack on the ground in the vicinity of the CRATER and the STABLES at HOOGE.

Private W.L. Million is commemorated on the Ypres (Menin Gate) Memorial.  The Memorial is situated at the eastern side of the town on the road to Menin (Menen) and Courtrai (Kortrijk).  The Menin Gate is one of 4 memorials to the missing in Belgian Flanders which cover the area known as the Ypres Salient which stretched from Langemarck in the north to Ploegsteert Wood in the south.  The Salient was formed during the First Battle of Ypres in October and November 1914.

The site of the Menin Gate was chosen because of the hundreds of thousands of men who passed through it on their way to the battlefields.  It commemorates those of all Commonwealth nations (except New Zealand) who died in the Salient and in the case of British casualties, before 16 August 1917. The memorial was designed by Sir Reginald Blomfield and was unveiled in July 1927 by Lord Plummer.  The Ypres Menin Gate Memorial bears the names of 54,344 officers and men whose graves are not known. [14] 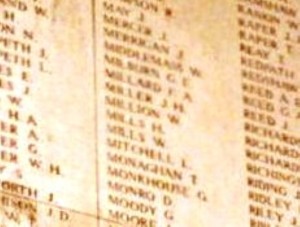 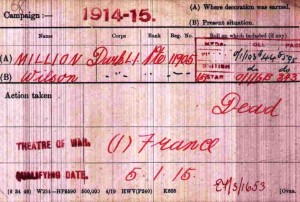 One thought on “MILLION W.”