Harry Monk was born 1888[3], the son of Alfred William and Emily Monk.  There were 8 children, all born at Bishop or West Auckland: [4]

By March 1916, 27 year old Harry, a single man was in Australia living at the Metropole Hotel, Sydney, New South Wales and worked as a “draughtsman”.  His father Alfred lived at 47 Percy Gardens, Tynemouth, Northumberland. [8]

The following summary was provided: [10]

In May 1917: Lance Corporal Harry Monk[11] was considered “permanently unfit for general and home service”[12]

Sapper H. Monk is commemorated on the Australian War Memorial, Canberra at panel 24.[15]

West Auckland Cemetery: A family headstone has the following inscription:[16]

Harry Monk was the 4th and youngest son of Alfred and Emily Monk.  Alfred was the manager of West Auckland Brewery.  Harry was recorded as being employed as an architect on the 1911 census.  In 1914, when hostilities broke out, Harry was working abroad, having been appointed surveyor to the Government of Tonga and Friendly Islands.

Harry Monk enlisted 20 March 1916, joining the Australian Engineers and arrived at Plymouth, UK in August 1916 before proceeding to France in November that year.  In January 1917, he contracted mumps and was treated at various hospitals in France and England before returning to Australia in September 1917 due to his continuing ill health.

Sapper Harry Monk was afforded an Imperial War Grave Commission burial [now the Commonwealth War Graves Commission] and was interred at Rookwood Necropolis Military Cemetery, Sydney, New South Wales, Australia at grave reference C.E.H.698.  Harry is commemorated on the family headstone in West Auckland cemetery.  Unusually, he is not recorded on the Roll of Honour in West Auckland Memorial Hall or the War Memorial on the village green.

I, my wife Kathryn and our Australian friends Mark and Jan Brownlie paid our respects to Harry on a fine, sunny afternoon Sunday 11 August 2019.  Thanks to Mark and Jan for taking the trouble to take us there and also to Corey Wiegold, Assistant Manager, NSW Office of Australian War Graves for providing detailed plans of the cemetery. 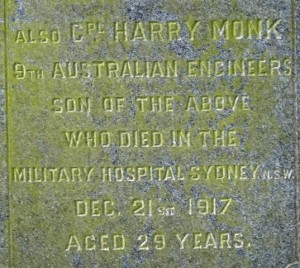 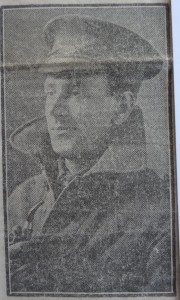 [10] Particulars of Service in the AIF in connection with ex-No.9931 Sapper Harry Monk, 9th Field Coy. Engineers  issued to the Department of Repatriation, St. Kilda Rd., Melbourne.  Copy of Army Form B.179 and extract of Army Form B.178 attached 30 June 1922