The service details of Joseph Morley have not been researched.

The 6th Battalion landed in France as corps troops for I Corps with the British Expeditionary Force in September 1939.  It took part in the Dunkirk evacuation in June 1940.  After converting to become the 93rd Anti-Tank Regiment, Royal Artillery it saw action in the Tunisia campaign, the allied landings in Sicily and the Allied landings in Italy with the VI Corps of the 1st Army.[5]

We had to part

He eased his pain

But broke my heart. 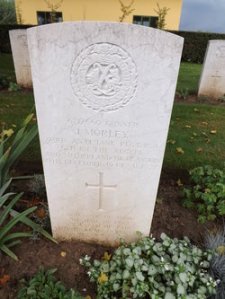