I worked at Aycliffe for 18 months.  I was lucky, I had an easy job – I checked over the ammunition.  I suppose now it would be called “Quality Control”.

We had to work shifts and a night shift.  A bus picked us up.  I wore a pair of overalls and a red berry.  The work clothes were worn on “the clean side” – there was a barrier and you had to change into work clothes one side then step over into the clean side.  They didn’t want any dust or gravel on the clean side.  Even at break time, when we went to the canteen, we had to stay on the rubber walkways.  We didn’t step off onto the grass.

I worked with women and girls from Middlesbrough.  They worked with the explosive materials and their complexions were yellow.  They worked for the good money, their beer money.  They were quite jolly, enjoyed singing while they worked.  There were some rough diamonds among them but they were no bother really.  They just enjoyed themselves.

I left when my husband Bernard was admitted to Bishop Hospital.  He joined the Army and when training at Bovington Camp, Dorset, he was injured playing football of all things.  It was a nasty injury made worse by a poorly fitted plaster cast, just above his ankle.  This caused him problems for the rest of his life.

I remember the noise, we all went out doors to have a look and I recall seeing planes chasing down the low line.  Some bombs were dropped in fields around Ramshaw.

We used to enjoy ourselves in the Queens Head – now, it’s the butchers shop and a hairdresser’s in the Centre.  It was run by the Atkinson’s.  I was very friendly with their daughter Alice who later married Jacky Kilcran.  Alice “tinkled the ivories a little bit” so they carried the piano out onto the flags stones in front of the pub.  Alice played the piano.  We were all singing and dancing in the street – happy days! 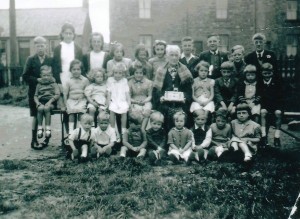 My husband Bernard was in the British Legion.  I can’t recall if he was secretary or chairman but on Remembrance Sunday, he often laid a wreath at the War Memorial in the cemetery.  Hugh Linsley from Buckhead Farm was President of the Evenwood and Ramshaw Post War Fund and he and his wife often laid a wreath.  There’s a nice photograph of Bernard and Mrs. Linsley. 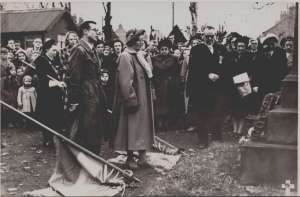