40797 Private John J. Oates, 18th Battalion, the West Yorkshire Regiment died of wounds 24 November 1916 and is buried at Etaples Military Cemetery, France.  He was 41 years old[1] and is commemorated on the Normanton War Memorial, West Yorkshire.

John Joseph was born c.1875 at Evenwood, the son of Edward and Sarah Ann Oates.  By 1916, John Joseph was married to Lily and lived at 48 Castleford Road, Normanton in the West Riding of Yorkshire.  [2]

The service details of Private John Oates have not been researched so the date he enlisted is not known.  Prior to the 18th West Yorkshire Regiment, John Oates served in the Kings Royal Rifles (service number 28982).[3]  The date when he entered France is not known.  He was not awarded the 1914-15 Star therefore he did not enter France until after 31 December 1915.  It is likely that either he was posted to 18/WYR specifically for the Battle of the Somme opening day, 1 July 1916 or was a draft for later engagements.

The 18th (Service) Battalion, (2nd Bradford), the West Riding Regiment was commonly known as the Second Bradford Pals and was formed in February 1915.  It was attached to the 93rd Brigade of the 31st Division. Others in the 93rd Brigade were:

In December 1915, the Division moved to Egypt then in March 1916, it went to the Western Front took part in the first phase in the Battle of the Somme (Battle of Albert) and suffered heavy casualties at Serre so was taken out of the front line for a number of months before returning in November for the tenth phase, the Battle of Ancre.

The battalion was not in the first assaulting wave that went over the top at 7.30am, but was in support.  The battalion advanced from the assembly trenches over open ground towards the British front and into No Man’s Land, moving from the front of Basin Wood towards Serre.  The Bradford men were cut down in hundreds, many before even reaching the British front.  The following notes are from the battalion War Diary.[4]

1 July 8.20am: message received from Brigade to the effect that the 16th West Yorks (1st Bradford Pals) were held up (with terrible casualties), and ordering the CO to go to Sap A to investigate. Lt-Col Kennard accordingly went forward, and was killed about 8.30am by artillery.

8.45am: Battalion left assembly trenches. Under heavy machine gun fire from the time of leaving dead ground up to our own front line trenches, and an intense barrage of shrapnel and HE. Casualties were very heavy. Brigade advance was held up in front of German wire, but 15th, 16th and 18th West Yorks and one company of 18th DLI advanced as if on parade. One platoon of the battalion got as far as our front line.  The Adjutant (Captain F.F. Williams) and OC A Company (Captain C.H.C. Keevil) were wounded early on and the casualties among the officers were severe. Owing to the unexpected resistance of the enemy of the Brigade was compelled to retire and a verbal message to this effect was received. For a time the first and second line was vacated and the battalion was broken up in retiring through our trenches.  The majority of our casualties occurred between Leeds Trench and our own wire and were due chiefly to machine gun fire from frank and front. Three very heavy barrages were formed along our line which hampered the advance and caused other casualties before reaching Leeds Trench. A number of casualties were also caused by indirect frontal machine gun fire.

4pm: Major H.F.G. Carter, under instructions from Divisional HQ, reported to Brigade HQ, and took over command of the battalion. The battalion was at that time very broken up and separated, and was being collected under Lt-Col Bowes of the 18th DLI.

4.30pm: about 60 of the battalion in Dunmow and Old Dunmow (trenches)

4.35pm: Major Carter went round Grey, Bradford, Monk, East Bleneau, numbers 1,2 and 3 posts and A Sap in search of remainder of the battalion. Except for a few wounded these trenches were entirely evacuated at this time.

9.30pm: 2/Lt. Pearce reported and was ordered by CO to return to QM at Bus for the night as he was wounded and looked terribly ill.

12.30am: Orders received that 92nd Brigade would attack and that battalion would be relieved by them and retire to Landguard Trench.

The 31st Division of the XIII Corps were required to cover the left flank of the V Corps and returned to its ill-fated stamping ground near the village of Serre and the John Copse. Its task was to provide a defensive flank to cover the advance of the 3rd Division to the south opposite Serre.

The 92nd and 93rd Brigades were in the line and the 13th and 12th East Yorkshires actually did rather well, capturing the German front line and establishing a strong post in the old mine crater. The failure of the 3rd Division left them hopelessly isolated and the German counter-attacks pounded away at their positions.  Enemy shells rained down on No Man’s Land and cut them off from all support. There was no hope of maintaining the isolated salient and that night the Yorkshiremen ended the day just as their predecessors of the 31st Division had five months earlier – back in the British front line.

As night fell on 13 November the situation was mixed. Gough remained optimistic and decided to order the V Corps forward again on a front stretching between Beaucourt and the Ten Tree Alley Trench, which ran across Redan Ridge about 500 yards south of the village of Serre. The situation lay in the balance as the British reorganised for the next push and the German reserves moved forward to bolster their line. The 190th Brigade of the Royal Naval Division was ordered to attack Beaucourt at 0745 – it fell at 1030pm. that day.

Gough wanted to resume the attack on the 15th but Haig intervened then after consultation ordered a further attack on the 18th November.  This proved to be the last attack of the Battle of the Somme.  The 31st Division was not involved.  The II Corps (18th, 19th and the 4th Canadian Division) and the V Corps (32nd and 37th Divisions) took the offensive to the Germans but the attack represented “the epitome of suffering.”

Private John Oates died of wounds 24 November 1916 at Etaples Military Hospital thus it is assumed his wounds were inflicted during the attack of the 12th November.

Etaples Military Cemetery:  During the First World War, the area around Etaples was the scene of immense concentrations of Commonwealth reinforcement camps and hospitals. It was remote from attack, except from aircraft, and accessible by railway from both the northern and the southern battlefields. In 1917, 100,000 troops were camped among the sand dunes and the hospitals, which included eleven general, one stationary, four Red Cross hospitals and a convalescent depot, could deal with 22,000 wounded or sick. In September 1919, ten months after the Armistice, three hospitals and the Q.M.A.A.C. convalescent depot remained. The cemetery contains 10,773 Commonwealth burials of the First World War. Private J.J. Oates is buried at grave reference XX B 16 A. 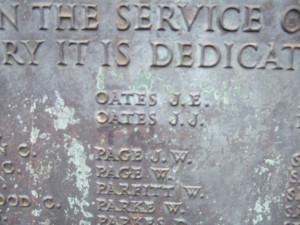