1623818 Sergeant Clarence Arthur Partridge, 640 Squadron, Royal Air Force Volunteers was killed in action 3 June 1944 aged 31.  He has no known grave and is commemorated on the Runnymede Memorial, near Windsor, London. [1]

Clarence Arthur “Clarry” was born c.1913 at Harrogate, North Yorkshire.  Known as “Clarry”, he was the husband of Hilda and father of Ann (b.1935), Keith (b.1937), Derrick (b1940) and Christine.  Christine was born 6 June 1944, D-Day and 3 days after her father’s death.  The family lived at South View, Deighton Bar, near Wetherby, North Yorkshire where Clarry had worked as a mechanic for a bus company.  Hilda later married Bob Stones and settled in Evenwood to whom she had a daughter Lynda.

The service record of 1623818 Sergeant Clarence Partridge has not been researched. 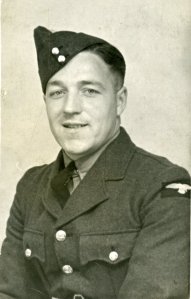 Number 640 Squadron was formed in January 1944 as part of No. 4 Group.  It took part in the main bombing offensive against Germany as part of Bomber Command’s main bomber force.  Between January 1944 and March 1945, the Handley Page Halifax B.Mk.III was flown for these missions.  The squadron was based at RAF Leconfield, near Beverley, East Riding of Yorkshire. Later, from March 1945, the squadron was one of 6 in No.4 Group to operate the Halifax B. Mk.VI before the end of the war.  It was disbanded 7 May 1945.

Sergeant C.A. Partridge was the flight engineer in the crew of Flight Lieutenant J.W.S. Skinner.  Their aircraft Halifax Mk. III (C8-G Serial No.MZ677) was one of 15 squadron aircraft that formed part of the 128 bomber aircraft despatched to attack rail yards at Trappes, France on the night of 2/3 June 1944.  The raid cost Bomber Command 16 aircraft, representing 12.5% of the force.  640 Squadron lost 3 aircraft (20%) including F/Lt. Skinner’s.  There was heavy flak over the target and at least 1 bomber was shot down near Evreux but on the homeward trip there was intense night-fighter activity from Trappes to the coast and many aircraft were seen to go down in flames.  It is currently not known whether Skinner’s aircraft was caught by flak or by a night-fighter but 4 members of the crew were lost when the aircraft crashed at Boutigny-sur-Opton, 11 miles east of Dreux, France.  Three of those who died now lie in Dreux cemetery.  Sadly, there is no known record of Sgt. Partridge’s burial place and thus he is recorded as “missing in action”. [3] 1623818 Sergeant Clarence Arthur Partridge was killed in action 3 June 1944.  He has no known grave and is commemorated on the Runnymede Memorial, near Windsor, London.

Sergeant Clarence Arthur Partridge is commemorated at panel 235 on the Runnymede Memorial.  The Air Forces Memorial at Runnymede commemorates over 20,000 airmen who were lost in the Second World War during operations from bases in Britain and NW Europe who have no known graves.  They served in Bomber, Fighter, Coastal, Transport, Flying Training and Maintenance Command.

The RAF Memorial on the Victoria Embankment, London was erected in 1923 as a memorial to:

“all ranks of the Royal Navy Air Service, Royal Flying Corps, Royal Air Force and those Air Forces from every part of the British Empire who gave their lives in winning victory for their King and Country 1914-1918”.

An inscription commemorating those lost in the 1939-1945 war was added in 1946.  The base is Portland stone, the eagle and globe are bronze.

Thanks to Lynda Ord [nee Stones].  The photographs below have been kindly provided by Dave and Joan Evans [nee Bryce].  Joan is an “Evenwood ex-pat” and regular contributor to our Facebook Page, “I Came From Evenwood and Ramshaw” now living in the deep south.  Many thanks from Lynda, all at Evenwood & Ramshaw and myself.