John Henry Pinkney was born c.1897 at Esh Winning,[3] the son of John Joseph and Mary Pinkney. There were at least 6 children: [4]

The service details of Private J.H. Pinkney have not been traced therefore the date he enlisted or the date he entered France is not known.  He was not awarded the 1914-15 Star therefore did not enter France until after 31 December 1915.  He served with 1/6 DLI which was a Territorial Battalion.  His original service number was 7407 which infers that he was a member of the Territorial Force prior to the outbreak of war.  Possibly because of his age, he was not permitted to serve overseas or perhaps he did not volunteer to serve overseas.  His later service number was 202546 which would have been issued in 1917.

The 1/6th Battalion were formed in Bishop Auckland in August 1914 as part of the Durham Light Infantry Brigade, Northumbrian Division and in May 1915 became the 151st Brigade of the 50th Division. The Division moved to France 16 April 1915 and served with distinction on the Western Front throughout the war. Other battalions were:

Following heavy casualties in June 1915 the battalion merged with the 1/8th to become the 6/8th then it returned to its original identity 11 August 1915 and was joined by:

The Battle of Arras – an overview

9 April 1917:  The first day of the battle was a triumph for the Allied forces.  In a few hours the German front had been penetrated to a depth of between 1 and 3 miles, 9,000 prisoners were taken, few casualties suffered and a way forward was (apparently) cleared.  The success of the Canadians at Vimy Ridge was sensational!  But the usual inflexibility in the plan prevented further progress – a pause of 2 hours after objectives had been gained, the day was shortening and the impetus ran out allowing the Germans to bring up their reserves on the 10th and 11th of April.

23 April:  Hostilities recommenced, the Germans had reorganised and were reinforced so could counter-attack and as a result, a month of attrition set in bringing a further 130,000 casualties for no additional gain of ground.

The aftermath of the Nivelle’s offensive had major repercussions on the French army.  The offensive was judged to be a failure and on the 29th April 1917, Nivelle was replaced by Petain.  In addition, the failure punctured the French fighting spirit and precipitated what historians called “the mutinies of 1917.”

On the 4th April, orders were received for the Division to move eastwards and on the 6th and 7th, the 149th and 151st Brigades moved to the Rollecourt area and the 150th went to Houvin-Houvigneul then all combined on the 7th April in the Avesnes area.  A further move to Habarcq-Wanquetin area took place on the 10th when the 149th occupied the Wanwuetin-Hauteville area, the 150th was at Habarcq and the 151st was at Agnez, Gouves and Montenescour.  The 7/D.L.I. (Pioneers) moved into Arras.  On the 11th April, the Division relieved the 14th Division – the 149th Brigade was the first into the line and occupied trenches to the south of Tilloy and straddled Telegraph Hill.  The 151st moved up to Ronville Caves and the 150th remained at Habarcq.  This new sector was the recently captured ridge to the immediate east of Wancourt and Heninel, the 56th Division was to the right and the 3rd Division was to the left.

Orders were received for an advance on the 14th April – the 50th and 56th Divisions were to attack, the 56th to capture Cherisy and the 50th Division was to protect the 56th left flank facing north along the high ground south of the 80 Contour with their left in Wancourt Tower (which incidentally had disappeared on the night of the 13th, having fallen down at 10.00pm.)  The 2 leading companies were to advance hugging the left flank of the 169th Brigade (56th Division) then when the 169th came to a standstill, the 2 leading companies of the 6/D.L.I. were to halt also and refuse their left flank, the 3rd and 4th companies were then to prolong the refused flank.  The 6/D.L.I. had the Wancourt Tower to their left.  As the attack commenced, a German barrage came over the lines but it appeared that the 6th passed through it successfully.  The 6th an 8th D.L.I. were intermixed and hostile machine gun fire made movement impossible.  The following detail of operations from the 151st Brigade HQ Diary is available:

Of the 3 counter attacks however there is no mention in any official diaries and there is a lack of detail but the 50th may be proud that “The Capture of Wancourt and Ridge” was sufficiently important to be included under heading of “Tactical Incidents” of Battle by the Battles Nomenclature Committee.

The First Battle of the Scarpe 1917 officially ended on the 14th April and during the night of the 14th-15th the 151st Brigade was relieved by the 149th Brigade, and moved back to support.  The 150th was still in reserve.  The Diary of the Divisional HQ records that casualties on the 14th April were estimated at 16 officers and 213 other ranks killed, wounded and missing.

14 April:  The following account describes in more detail the action: [9]

Private John Henry Pinkney died on the 14th April 1917.  He has no known grave.  Later research records that 6/DLI suffered the following fatalities:[10]

The Arras Memorial stands in the Faubourg-d’Amiens Cemetery in Arras and it commemorates 35,000 servicemen from Britain, South Africa and New Zealand who died in the Arras sector between spring 1916 and August 1918 who have no known grave.  It was unveiled in 1932.

[2] The War Memorial is located at Mount Pleasant to the west of Stanley, Crook

[3] SDGW This source records his birth place as Evenwood but the 1901 census records a J.H. Pinkney living at Middlesbrough with his parents John and Mary.  JHP is recorded as being born at Esh, Co. Durham and not Evenwood.  Other siblings were born at Waterhouses, Malton and Crook, all near to Esh in West Durham.  The 1911 census shows the family living at Low Beechburn, Crook.  It is likely that the SDGW information is incorrect. 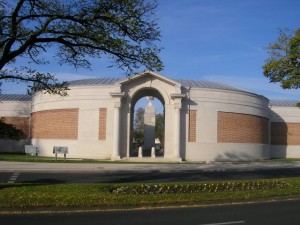 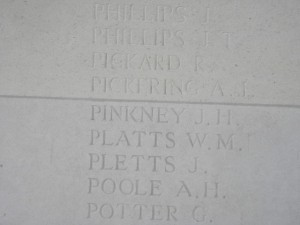 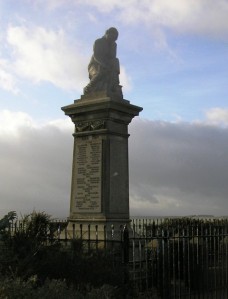 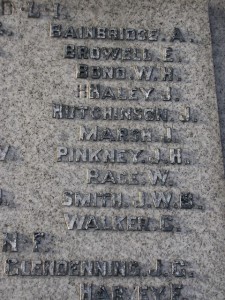