Gordon Priestley was born in 1893[2] at Wackerfield near Evenwood the son of Emmanuel and Mary Ann.  There were 7 children:[3]

Gordon Priestley enlisted at Cockfield into his local Territorial Force, the 6th Battalion, Durham Light Infantry and was given the regimental number 250165.[7]  He was promoted to Serjeant, the date of which is unknown.

The 1/6th Battalion was formed in Bishop Auckland in August 1914 as part of the Durham Light Infantry Brigade, Northumbrian Division and in May 1915 became the 151st Brigade of the 50th Division.[8] The Division moved to France 16 April 1915 and served with distinction on the Western Front throughout the war.  Other battalions were:

Following the German Spring Offensive it was reduced to cadre strength in July 1918 and transferred to Lines of Communication. [9]

From 31 December 1915 until 26 October 1917, Serjeant G. Priestley death, the Division took part in the following engagements on the Western Front:

1/6 DLI War Diary for the month of October 1917 has not been researched so the exact circumstances of his death remain unknown although the letter dated 18 November 1917 to Amelia Gooding from Serjeant H. Henderson reproduced below indicates that he may have been killed as a result of an engagement with a German sniper.

The offensive had 8 distinctive phases:

Many Divisions visited the Ypres Salient during the Third Battle of Ypres and on more than one occasion.  A total of 54 Divisions were thrown into battle.  The offensive cost the British nearly 310,000 casualties, the Germans slightly less and it consumed all of the available reserves.

6 November 1917:  the village of Passchendaele was entered and the whole campaign ended a few days later when more of the ridge was taken.  It achieved none of its objectives although the Germans could no longer look down on the Ypres Salient which had been deepened by about 5 miles and they had been prevented from attacking the French when its army was in disarray following the failure of the Nivelle Offensive.

From the outset, it was obvious to the German Fourth Army that a new attack was being prepared and the previous year they had begun to strengthen their defences.  The British did not force home their initial advantage and it was not until 11 July that an air offensive began.

31 July:  the attack commenced when the British Fifth Army attacked north-east from the Ypres salient.  Initially, good progress was made but a strong counter-attack resulted in only a 2 mile advance.  Heavy rain fell on the first night flooding the swampy ground whose drainage system had been totally destroyed by the 10 day bombardment.  As a result the whole operation was held up but offensive actions still took place.

The Division took over from the 34th and the relief took place on the night of the 24/ 25 October 1917.  The 149th Brigade occupied the front line to the south of Houthulst Forest and astride the Ypres-Staden Railway.  The Brigade received orders to attack on the evening of the 24th and the principal objectives included Hill 23, Colbert cross roads and a ground for huts some 700 yards south west of Schaap Baillie. 6/DLI did not enter the line until 31 October, evening.

A history referred to the “renewed acquaintance of Belgian mud” and reported 20 casualties resulting from an attack by a squadron of Gotha bombers but no date is given for this event.  The history continues:

“Exceptionally large working parties were demanded on each of the 3 nights and their experiences were perhaps worse than those of the tour in the line which was to follow.”

“At the period when this story begins, i.e., towards the  end of October, the whole Salient was a dreary desolate area, pockmarked with countless shell holes (those in the forward area being inhabited by small garrisons who constituted the “front line”), lines of water-logged, battered shell-torn trenches, evil-smelling and rat–infested cellars beneath a rubble of bricks, which once marked the dwelling place of farmer or villager in pre-war days, and burrowed holes in sodden earth, dignified by the name of dug-outs. Thick, clinging mud covered duck-board tracks and the few remaining roads to the front line; to slip from a former (a common experience) was to be engulfed in a shell hole feet deep in stinking water which often hid the poor remains of man and beast. Away from the trenches and “roads” the Salient presented an almost endless conglomeration of shell holes, stretches of water and morass; a patch of dry ground was a rarity. And this dismal state of the ground extended almost for miles beyond the front line, back west of Ypres and the Yser Canal, to where the guns were in action, “camouflaged” as much as possible, but always under a hail of shell of all calibre which the enemy’s artillery poured upon the Salient, covering almost every yard so that none were safe, even miles behind the front line. And our guns were just as persistent (even more so, for we were attacking) in searching out every hole and corner of the desolate area over which were scattered the enemy’s troops, eking out an existence not less precarious and vile than that under which we were living.

The 50th Division, it is true entered late into the operations, but early into the full horrors of the battlefield, for by the end of October, anything more terrible than conditions in the front line and the ground over which the 149th Infantry Brigade attacked, cannot be imagined, while the Divisional Artillery, longer (as usual) in the line than any unit of the Division, faced conditions which appalled even the stoutest-hearted gunner.”

“Fifty square miles of slime and filth from which every shell that burst threw up ghastly relics, and raised stenches too abominable to describe; and over all, and dominating all, a never ceasing, ear-shattering, artillery fire and the sickly reek of the deadly mustard gas. Such was the inferno into which, after a long journey by train and road, the Colonel led the four Battery Commanders in the early morning of the 23rd October, 1917”

“The enemy’s artillery was very active, especially at night when he deluged us with mustard gas. So intense was this gas that everything one touched was infected with it. Nobody had a voice left after the first few days.

The action of the mustard gas was insidious: “We did not at first realize the full danger of this, and just laughed because no one had a voice; but when people began to blister and swell, and two men of my old Battery died horribly from eating bread which had been splashed with this stuff, we got wind up thoroughly. The whole area was tainted: one could touch nothing with safety; even our own doctor, who came to see us, slipped in the mud and was so badly blistered by it that we never saw him again. The gas casualties were bad enough, but oh! The shell casualties were pathetic. I lost many of my greatest friends in the Battery, horribly mutilated in the mud, and towards the end was as near a raving lunatic as possible … Our guns were in the open; the only protection from the gunners the high explosive; and the mud was over everything and tainted with mustard gas.”

“The 25th October had been a beautiful day but at midnight a continuous rain began to fall.   It (the attack) began at 5.40 and by nightfall the Canadian corps had won 500 yards. X Corps gained nothing. Two French divisions moved about a tenth of a mile closer to Houthulst forest.  In the Fifth Army, XIV Corps got nowhere and as for XVIII Corps the official history says, “Here too the mud knee deep checked progress to a crawl of rather less than a yard a minute.”  The barrage was lost, rifles became quickly clogged and the men fell back if they could to the starting line or were cut off.  In this caricature of a military engagement 12,000 British and French were lost.”

Given the evidence presented in the letter to Miss Amelia Gooding reproduced below, Serjeant Gordon Priestley could have been killed 25 October 1917, morning:

I received your letter yesterday & am pleased to hear you are keeping in good heart.  There is still a possible chance of Gordon being safe so you must look on the bright side as I am doing till some definite news is heard of him.

The person you speak of in your letter who wrote & told you that Gordon was wounded is in my company & I know him very well.  I am sorry to say he has not seen Gordon since I last saw him which was the night of 24th October.  I have not the slightest hesitation in saying he would write in that manner to keep up your spirit.  But what he told you is all wrong.

I have spoken to every man who went into action with your dear one & as far as I can gather he was not seen after the morning of the 25th.

A German sniper who was picking off our wounded men was observed by Sgt. Priestley who at once engaged him in a duel.

It was a brave act to do in the face of the enemy & that was the last time he was seen by any of his men.

The final toll of Allied losses came to about 500,000 the German losses were estimated as half that total:

“In March 1922 the British War Office published its “Statistics of the Military Effort of the British Empire during the Great War.”  Released as soon as possible after the event, it flatly lists British casualties between July and December 1917 (the Flanders campaign and Cambrai) at 48,614.  This does not include French losses on the north flank which may be conservatively reckoned at 50,000 for the same period.  Thus the total Allied losses come to half a million.   The Flanders campaign was normal for the Western Front in which the proportion of dead to other casualties almost always ran about 30% therefore 150,000 approximately were killed.

In the same report German casualties are listed as 270,710.”

Serjeant G. Priestley is commemorated on the Tyne Cot Memorial located in the Tyne Cot Cemetery, some 9 kilometres north east of Ypres, West-Vlaanderen, Belgium.  The Memorial to the Missing is one of 4 memorials to the missing in Belgian Flanders which cover the area known as the Ypres Salient which stretched from Langermarck in the north to Ploegsteert Wood in the south.  The Tyne Cot Memorial to the Missing forms the north-eastern boundary of the Tyne Cot Cemetery and bears the names of almost 35,000 officers and men whose graves are unknown.  The memorial was designed by Sir Herbert Baker and was unveiled in July 1927. [15]

Serjeant G. Priestley is also commemorated on a family headstone in Cockfield Cemetery. 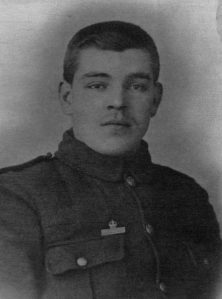 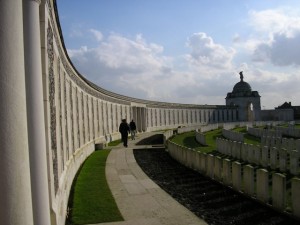