7 July 1896: Constance Richardson was born at Middlesbrough,[1] the daughter of Benjamin and Kate Richardson.  There were at least 5 children: [2]

Benjamin and his wife, Kate [nee Fenning] were born in the County of Suffolk, of agricultural stock, Benjamin’s family being farm labourers whilst Kate’s father was recorded in 1881 as a “Farmer of 120 acres employing 4 men and a boy”.[4]  By 1891, Benjamin then aged 23, was in lodgings in Middlesbrough, employed as a “Railway Shunter”.[5]  Benjamin and Kate were married in 1896.[6]  By 1901, the family lived at 10 Queen Street, Witton Park, near Bishop Auckland, County Durham where Benjamin worked as a, “Railway Mineral Guard”[7] and by 1911, they lived at Frances Terrace, Bishop Auckland.  Benjamin was recorded as being employed as a, “Railway Guard N.E.R.”.  Constance, then aged 14, and of working age, was not recorded as in employment. [8]

Constance Richardson was 18 years old when Britain declared war on Germany.  Her father Benjamin was about 46, over the recruitment age and worked on the railways so would have been employed in a “Reserved Occupation” meaning that he didn’t need to volunteer for active service.  Nevertheless, many “over aged” men and railwaymen did so.  It is understood that he worked as a guard on the mineral trains between West Auckland and Tebay, the South Durham and Lancashire Union Railway worked by the NER, North Eastern Railways.  In 1914, Constance’s brothers were too young to serve in the armed forces.  At this time, it is understood that Constance worked as an apprentice milliner at a shop owned by Thomas Gibson, who resided at 1 South View, Bishop Auckland.  He was recorded as being employed as a, “General Draper” and his wife as, “Assisting with business”.[10]

15 August 1915: The first national registration exercise in the United Kingdom was undertaken when the National Registration Act, requiring the registration of all men and women aged 15-65, became effective.  The aim was to establish how many men were available to join the armed forces should it be required. Thus far, the war had claimed many casualties and enlistments were beginning to level off by early 1915, resulting in a fear that there would not be enough men joining the Armed Forces required to win the war.  Some 29 million registration forms were believed to have been completed across England, Scotland and Wales.  [11]

June 1916: Constance applied to be a nurse at Helmington Row Hospital near Crook but was rejected.  The hospital was built in 1903 as a fever hospital to treat TB, typhus and smallpox.[12]  It was not used as a VAD Hospital.

23 April 1917: Constance commenced work at H.M. Factory Gretna.[13]  The munitions factory was the UK’s largest cordite producer.  It was located on the north bank of the Solway Firth, near Gretna, Dumfries & Galaway, Scotland.  It was built in response to the shell shortage crisis of 1915.  Construction work started in November 1915 and munitions production commenced in April 1916.  She joined a workforce of which was predominately described as working class [80%], female [70%], 80% of whom were single and young, 62% were aged 18 or under.  Of those who’d worked before, 45% had been domestic servants, 19% came from other munitions factories, 15% had other factory experience, 15% were laundry workers, farm labourers, dressmakers, teachers and clerks and 6% had been shop assistants.  In a little over a year, 11,000 women flooded into the area drawn from all parts of the UK and Ireland, particularly Cumberland, Dumfriesshire, the Highlands, Lancashire, Yorkshire and the North East of England.  They were eager to take advantage of the high wages and to do their bit for the war effort.[14] By 1917, approx. 11,500 women and 5,000 men worked at the factory.  At its peak, 800 tons of cordite was produced weekly, more than all other munitions plants in the UK combined. Production of cordite ceased in November 1918 at the end of the war.

Constance, like most of the women at the site, lived in accommodation provided by the State.  The Ministry of Munitions not only organised the construction of a factory 9 miles in length but also built 2 new townships to house migrant workforce. [15] Constance’s first home was at the Flora Macdonald House in the Gretna Township.  Later, she resided at Bungalow Q, 18 East, Gretna Township and a lodging at R16 East.

September 1917: The tragedy of the Great War visited Constance when her fiancée, 24 years old Michael Rudd was killed in action.  13/18365 Corporal M.W. Rudd, 13th Battalion, the Durham Light Infantry, is recorded as being killed in action 20 September 1917.  He has no known grave and is commemorated on the Tyne Cot Memorial, Belgium, the War Memorial in the grounds of St. Andrew’s Church, South Church, Bishop Auckland and the memorial plaque in Newgate Street Methodist Church, Bishop Auckland.  Michael was the son of John Thomas and Helen Rudd of Bedburn House, Cockton Hill, Bishop Auckland.[16] He’d previously worked as a clerk at an engineering works.[17]  Michael had volunteered, enlisting 5 September 1914 and entered France 25 August 1915, serving just over 14 months, seeing action on the Somme [18] before returning home in October 1916 for several months in which time he was treated for a hernia. [19] He served for a second time on the Western Front, entering France in July 1917 only to be killed at Passchendaele, Belgium about 2 months later.[20]

June and July 1918: During this period, 1,400 workers at the factory were brought down by the flu epidemic which ravaged the country.[21] It is not known whether Constance was affected by the malady.

6 December 1918: Demobilization began at Gretna less than a month after the Armistice.  From early 1918 workforce numbers had been reduced for example the cordite section at Gretna was reduced to 2,000 by May 1918. The exact date when Constance returned home to resume her civilian life is unknown.

Photos showing a recruitment poster, the girls work gear, a section through a cartridge to show cordite strings and the girls making cordite 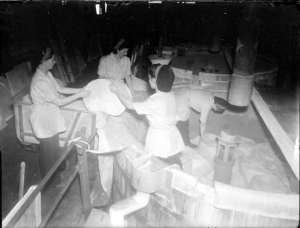 1939: Ernest and Constance Peart lived at Hestebel Gardens, Bishop Auckland.  Ernest was recorded as being employed as a, “Clerk, Railway Engineers Dept.” and Constance as, “Unpaid domestic duties”.  It is probable that they had 3 children at the time since 3 entries are “officially closed”.   [25]

[9] “Connie’s War” Ann Kerry 2005 Unless referenced, this profile is based on my notes from this booklet.  To date, I have not secured my own copy.

[14] https://www.devilsporridge.org.uk/about.  These details are from information panels exhibited at the Devil’s Porridge Museum – well worth the visit.