26969 Private John Robinson, 14th Battalion, the Durham Light Infantry died of wounds 7 October 1915.  He was 26 years old and is buried at Etaples Military Cemetery, France[1] and is commemorated on the St. Helen’s Colliery Memorial Cottages.

John, known as Jack, was born 1891 at Woodhouse Close, Bishop Auckland, the son of Thomas and Judith Ann Robinson.  There were 6 children:

In 1901, the family lived a Woodhouses, north of St. Helen’s Auckland.  Thomas senior and his oldest son Thomas both worked as coke drawers and William was a labourer at the coke ovens.  Margaret was an assistant school master.[2]  By 1911, sons Thomas and William were not at home, Margaret was still teaching (the National School, South Church), Robert was a “journeyman painter” Thomas and his youngest son John were labourers, at the coke ovens and colliery respectively. [3]

Jack aged 23 years 3 months attested 8 September 1914 and underwent a medical that day.  He stood 5ft. 8½” tall and weighed 134lbs.  He had a fresh complexion, brown eyes and light brown hair.  His religion was Church of England.  He worked as a miner and was considered fit for service. [4]

He was posted to the 14th Battalion, Durham Light Infantry from the depot 9 September 1914 and given the regimental number 26969.[5]  The 14th (Service) Battalion, DLI was formed at Newcastle in September 1914 as part of Kitchener’s New Army K3 and came under orders of the 64th Brigade, 21st Division.[6]  Other battalions in the 64th Brigade were:

Training took place at Aylesbury, Halton Park, High Wycombe and Witley Camp.[8]  The battalion landed at Boulogne 11 September 1915 and the 64th Brigade was soon heavily involved in action at the Battle of Loo, 25 September – 8 October.[9]  At 1.00am 26 September, the 14/DLI and 15/DLI passed the old British front line and at 2.00am reached the old German front line north of the mining town of Loos.  14/DLI was selected to reinforce the 63rd Brigade which was facing a hostile German counter attack in Chalk Pit Wood.  By 10.30, the advance was under considerable shell and machine gun fire and a general advance was ordered at 11.00am.  The Durhams suffered from heavy enfilade machine gun fire from Chalk Pit Wood.  The position of the 64th Brigade was subject to intense shell fire and the bombardment continued until dusk.  They were relieved in the early morning of the 27th.  Losses in the ranks amounted to 277 and 450, 14/DLI and 15/DLI respectively. [10]    Private Jack Robinson was one of the casualties.  He died of wounds at 7.45pm 7 October 1915 in O.C. 1 the Canadian General Hospital, Etaples.[11]  He had suffered gunshot wounds (GSW) to the thigh and leg.[12]

A fellow worker at St. Helen’s Colliery was 26954 Corporal T. Pratt who attested 7 September 1914 survived this engagement.  They were probably known to each other.  Corporal Pratt was killed in action 18 September 1916 at the Battle of Flers-Courcelette and is commemorated on the Thiepval Memorial. [16]

The inscription was provided by his mother, his father having died.  The cemetery register records Mrs. Robinson’s christian name as Julia.  The 1901 and 1911 census details record it as Judith.

During WW1, the area around Etaples was the scene of immense concentrations of Commonwealth reinforcement camps and hospitals.  It was remote from attack except from aircraft and accessible by railway from both the northern and southern battlefields.  The cemetery contains 10,771 Commonwealth burials. [17] 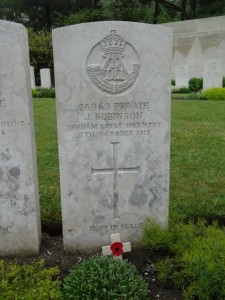 One thought on “Robinson J”