Frederick Saltmarsh was born 1892 [3] at Staindrop, County Durham the son of Fred and Elizabeth A. Saltmarsh.  There were at least 4 children:

Frederick’s father Fred hailed from Latchingdon, Essex [8]within the Purleigh Parish in the Ecclesiastical Parish of Rochester.[9]  They were agricultural labourers.  Fred moved north to County Durham with his parents, Samuel and Elizabeth and his brothers Walter, Joseph and Samuel about 1883/84.  At that time there was a large scale migration of families from Essex to work at the brickworks at Butterknowle, County Durham although many men found work in the coal industry as miners or cokemen.  A terrace of houses at Butterknowle was in fact called Essex Row.

Frederick Saltmarsh enlisted at Staindrop into the Durham Light Infantry and was allocated the regimental number 16916.[11]  He was promoted Lance Corporal eventually being promoted to Company Serjeant Major.[12]  His service records have not been researched.

The 13th (Service) Battalion, the Durham Light Infantry was formed in Newcastle as part of K3, Kitchener’s New Army and came under the orders of the 68th Brigade, 23rd Division.  It joined the 74th Brigade, 25th Division 19 September 1918 at St. Riquier.[13]

Between 21 and 26 August 1915 the Division landed in Boulogne and proceeded to the concentrate near Tilques. Private F. Saltmarsh entered France 25 August 1915.[14]  The 23rd Division thereafter served on the Western Front until late 1917 when it moved to Italy.

1915
5 September: the Division was attached to III Corps and moved to the Merris-Vieux Berquin area where trench familiarisation began under the tutelage of the 20th (Light) and 27th Divisions. The Division took responsibility for a front line sector for the first time nine days later, taking over between Ferme Grande Flamengrie to the Armentieres-Wez Macquart road.  CIII and CV Brigades RFA were attached to 8th Division for operations in connection with the Battle of Loos. At this time, 23rd Division was holding the front at Bois Grenier. It remained in this area for a considerable time. 10th Northumberland Fusiliers carried out the Division’s first trench raid in the night of 31 December / 1 January.

1916
The Division was relieved after a lengthy five month spell in the front line by 34th Division, between 26 January and 8 February 1916. After a certain amount of confusing movement, Divisional HQ was established at Blaringhem and the units concentrated around Bruay.

3 March 1916:  orders were received to relieve the French 17th Division in the Carency sector. The front to be held was between the Boyau de l’Ersatz and the Souchez River, including the posts on the Notre Dame de Lorette hill behind.  Artillery was positioned in the area Carency – Ablain St Nazaire – Bois de Bouvigny, an exposed position in which it was subject to severe shelling. In early March many former miners were withdrawn from the ranks to establish a Tunnelling Company of the Royal Engineers. Mid-March saw 68th Brigade taking over the Calonne front and 69th the Angres front. Many parties were attached to 176 Tunnelling Company RE especially for work in the Noulette sector. Relieved by 2nd Division between 12 and 19 April and withdrew to Bruay area.

The German Attack on Vimy Ridge

21 May:  The enemy attack fell most heavily on 47th (London) Division, which was to the 23rd Division’s right in the area of Berthonval. Shellfire fell heavily around Aix Noulette from 4.30pm. Divisional artillery was very active in support of the 47th Division until 24 May and again on 1 June when 2nd Division continued operations to recover lost ground. 23rd Division was relieved by 47th (London) Division on 11 June and moved to Bomy, with the artillery going to Chamblain Chatelain (“Charlie Chaplin”) and Therouanne. Intensive training commenced.

The Battle of the Somme

The Division took part in the following engagements:

Serjeant F. Saltmarsh was awarded the Military Medal in October 1916.

“On the 16th there was a great presentation by the divisional commander of honours won during the Flanders fighting.  Pte A. Constatine had been awarded a bar to his Military Medal, while the ribbon of that decoration was given to Sergts. H. Burns, W. Powell, J. Robson, F. Saltmarsh, W. Sledge and E. Wilkinson…” [15]

The citation included the following text:

“He was wounded by shell fire in the neck during a counter-attack.  He inspired his platoon with confidence and brought them out safely.” [16]

“Sergt. F. Saltmarsh DLI of Staindrop had been awarded the Military Medal.  He was wounded by shell fire in the neck during a counter attack, inspired his platoon with confidence and brought them out safely.”

1917
The Division fought at the Battle of Messines and The Third Battle of Ypres, at the following phases:

November 1917:  the Division moved to Italy where it then remained. It completed concentration between Mantua and Marcaria on 16 November and took over the front line at the Montello on 4 December.

18 September: 13/DLI returned from Italy arriving at St. Riquier and came under the orders of the 74th Brigade, 25th Division.  The battalion was joined by:

The Division was involved in the following engagements: [18]

The Battle of Beaurevoir, a phase of the Battles of the Hindenburg Line

Marching up from between Amiens and Albert to Templeux-le-Guerard, the Brigades took up position on 3 October at Ronssoy, Moislains and Nurlu, preparatory to an attack on the enemy’s defensive line at Beaurevoir.   Fighting for the well defended position went on until 7 October, by which time a 3000 yard advance had been made despite heavy casualties. 508 German prisoners were taken.

The Battle of Cambrai 1918, a phase of the Battles of the Hindenburg Line

8 October proved to be a highly successful day for the Division, which made a fine advance in the area of Ponchaux with few casualties.

The Pursuit to the Selle

9 October:  the Division pressed through Honnechy and St Benin, although losses mounted. The Division was relieved during the night 11/12 October by 50th Division. The Division rested in the area Serain – Premont – Ellincourt until 16 October.

The 25th Division was part of the XIII Corps Fourth Army. [20]  Between 5 and 10 October, the Brigade was involved in heavy fighting and between 12 and 23 October, the battalion was at billets, received a large draft and trained for open warfare.  C.S.M. F. Saltmarsh died of wounds 18 October 1918.  It is therefore presumed that his wounds were sustained during fighting which took place earlier in the month, possibly 10 October.

10 October: 5.30am 13/DLI led 74th Brigade with the intention of reaching the high ground north east of le Cateau.  At 10.00am, machine gun fire from a position south west of the village of St. Benin held up the battalion.  At about 2.30pm, a heavy barrage was put down by the enemy.  Hand to hand fighting took place in the village and within an hour the village was taken and a line was established beyond the river Selle to meet the Americans on the right.  During the night, the enemy bombarded St. Benin and the valley to the south west with gas shells.  The 2nd Royal Munster Fusiliers relieved 13/DLI on the night of 11/12 October.

“Losses since the beginning of the month had reached the total of 21 officers and 428 men, mostly sustained in heavy fighting at Beaurevoir.” [21]

Company Serjeant Major Frederick Saltmarsh M.M. is buried at grave reference I.F.40 Doingt Communal Cemetery Extension.   The village of Doingt was taken 5 September 1918 by the 5th Australian Division and the 20th 41st and 55th Casualty Clearing Stations were established there from September.  There are 418 burials.

The following epitaph was organised by his wife, Gertrude:

Till We All Meet Again

Dearly Loved By All”

[11] Soldiers Died in the Great War 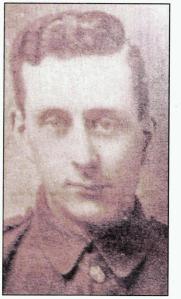 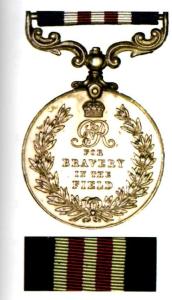 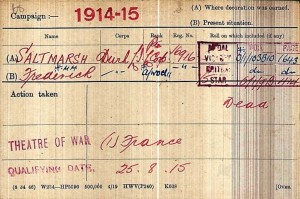 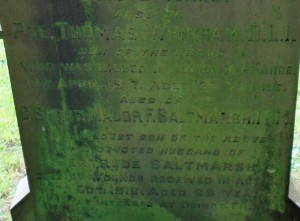