William Scott was born 1890 [2] the son of William and Jane Scott.  There were 4 children both born at West Auckland:[3]

The 14th (Service) Battalion was initially attached to the 64th Brigade, 23rd Division but on 25th November 1915 it was transferred to the 18th Brigade, 6th Division as part of the XIV Corps, Fourth Army. [15]By 1916, other battalions in the 18th Brigade were:

Having been in France for only a few days, lengthy forced marches brought the Division into the Reserve for the British assault at Loos.  The Division was sent into action 25 September 1915, whereupon it suffered appalling casualties for little gain.  The 14/DLI lost Lieut.-Col. A.S. Hamilton who died of wounds received near Bois Hugo and 2 other officers were killed, losses in the ranks amounted to 277 in this action.  Later research records 14/DLI lost 4 Officers and 54 Other Ranks killed in action or died of wounds between 25 September and 10 October 1915. [16]

The 6th Division was involved in the trench warfare in the Ypres Salient. Private W. Scott spent some time, 2 weeks at Etaples with influenza and re-joined the battalion in the field 25 August 1916.[17]  14/DLI saw action at the Battle of the Somme, the Battle of Flers-Courcelette, the Battle of Morval and the Battle of Le Transloy.[18]  23 September 1916, Private W. Scott suffered a gun-shot wound to the back and spent 87 days in hospital, 23 September – 19 December 1916 in the UK. [19]  It is likely that his wound was inflicted during action at Flers-Courclette.

Private W. Scott was with 20/DLI and saw action at the Battle of Messines 7 – 14 June 1917.  20/DLI spent the first 3 weeks of July at Mont des Cats when over 250 men were absorbed from drafts.  Training for the attack which would signal the beginning of the Third Battle of Ypres, 20/DLI was based at Kenora Camp near Westoutre.

The offensive had been postponed and it was not until 3.50am 31 July that 20/DLI went forward.  The War Diary reports that en-route to the assembly line, casualties were sustained by an enemy barrage, 1 OR killed and 15 ORs wounded including 1 gassed.  The battalion formed up in the vicinity of Klein Zillebeke road and the assault was to be made upon the enemy front line known as Imperfect Trench [the Red Line].  The Red Line was to be the line of resistance, the Green Line was to be 400 yards further on and the Blue Line was to be the Support Line.  The front line was successfully taken in face of heavy artillery shell and machine gun fire from concealed positions which our artillery had not destroyed.  20/DLI advanced to the Blue Line and slightly in front of it but could get no further.  In the afternoon, the enemy counter-attacked on the left of the line.  The whole area – the assembly area, No-Man’s Land, the captured ground and Fusilier Wood was under heavy and continuous barrages of howitzer and field gun fire, while No-Man’s Land and the captured ground were enfiladed by machine gun fire.  The War Diary reports that:

“artillery fire, together with rifle and Lewis Gun fire from the Blue Line and from a Vickers Gun which had succeeded in setting up to our left flank forward positions, smashed up the counter attack…

Private W. Scott has no known grave and is commemorated on the Ypres (Menin Gate) Memorial.  The Menin Gate is one of 4 memorials to the missing in Belgian Flanders which cover the area known as the Ypres Salient which stretched from Langemarck in the north to Ploegsteert Wood in the south.  The site of the Menin Gate was chosen because of the hundreds of thousands of men who passed through it on their way to the battlefields.  It commemorates those of all Commonwealth nations (except New Zealand) who died in the Ypres Salient and in the case of British casualties, before 16 August 1917. The memorial was designed by Sir Reginald Blomfield and was unveiled in July 1927 by Lord Plummer.  The Ypres Menin Gate Memorial bears the names of 54,344 officers and men whose graves are not known. [29]

[27] Statement of the Services 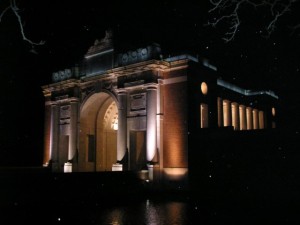 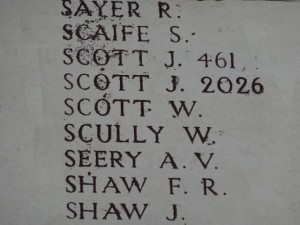 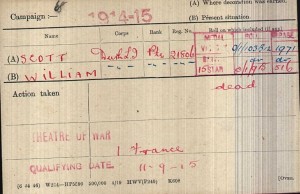