THOMAS ROWLANDSON: Some Details of his Military Service

In December 1887, the Durham Rifle Volunteer Corps underwent a reorganisation and became the 5 Volunteer Battalions, Durham Light Infantry.  The 2nd served volunteers from the Bishop Auckland, Middleton, Stanhope and Barnard Castle areas with its HQ at Bishop Auckland.  In January 1900 an appeal was made to the Volunteer Battalions to raise a company of 116 all ranks to reinforce their regular battalions serving in South Africa.  Many more men in County Durham responded to this call than were required.[1]

The 1st Volunteer Service Company formed from the 5 Durham Volunteer Battalions embarked at Southampton 23rd February 1900 and reached the 1st Battalion, DLI early in April soon after the relief of Ladysmith.  It was camped at Elandslaagte and shared the same fortunes as the 1/DLI until 9 October 1900 when it was sent to Van Reesnen as part of the Drakensberg Defence Force.  It remained there until April 1901 and embarked for home at Durban 8 May 1901.

The 2nd Volunteer Service Company sailed from Albert Dock (Liverpool?) 15 March 1901 and joined 1/DLI 23 April 1901 at Eden’s Kop near Heidelberg becoming an integral part of the regular battalion.  It was relieved at Bankop, on the Swaziland border by a 3rd Volunteer Battalion in April 1902.  The 2/VSB embarked at Cape Town 12 May 1902.

The 4th Volunteer Service Battalion, formed from Durham and Northumberland volunteer battalions embarked at Southampton 14 March 1901 and on arrival was attached to the 2/Buffs on blockhouse duty between Balmoral and Brugspruit near Pretoria on the Lourenco Marques Railway.  It was later attached to the 2nd Northumberland Fusiliers until it embarked at Cape Town May 1902. [2]

The Durham Volunteer Battalions contributed 10 officers and not less than 400 men.[3]

27 February 1901: Thomas Rowlandson, aged 19, served with the 2nd Field Service Company, Northumberland Fusiliers (regimental no.9075).  It therefore seems probable that he was with the 4th Volunteer Service Battalion with the 2/Buffs and later attached to the 2/NF. Accordingly, it is likely that he served in South Africa between April 1901 and May 1902.  Peace was signed 31 May 1902. [4]  Thomas Rowlandson was discharged 22 June 1902 and immediately re-joined the 2nd Voluntary Battalion, DLI.

Bishop Auckland Town Hall is the home of a commemoration to the 136 men who served with the 2nd Volunteer Battalion, Durham Light Infantry and participated in the Boer War 1899-1902.  The text reads:

In grateful remembrance of the members of the 2nd Vol. Battn. Durham Light Infantry who in a day of stress and danger offered themselves in patriotic devotion to safeguard the interests of the Empire and served in South Africa with the Volunteer Service Companies and Imperial Yeomanry.

Erected by their fellow townsmen and friends.

The names and rank of those serving with the following companies and yeomanry is given.

Under the Army reforms of 1908, the Volunteer Forces were dissolved 31 March 1908.  The Territorial Force was inaugurated the following day when it was organised into regional Divisions, area Brigades and local Battalions.

Thomas Rowlandson was to be promoted to Sergeant but since his service record has not been researched then the exact dates of his promotions remain unknown – possibly he was promoted to sergeant about 1910. [6]

Tom’s good friend was Private W. Castle and a photograph of him is provided below. 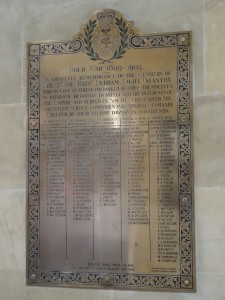 [6] His service record has not yet been researched.  A family photograph shows Thomas in uniform with his 3 stripes estimated to be 1910 (T. Rowlandson Collection)

1 April 1908: The volunteers were reorganised on the lines of the regular army, in brigades and divisions with staffs of regular officers, complete with all their ancillary services.  Under the new scheme the counties of Northumberland, Durham and Yorkshire supplied 2 divisions, the Northumbrian and West Riding, to the former of which all the Durham Territorial Battalions were assigned.  A Division was in effect a self-contained army of approximately 18,000 men including infantry, cavalry, artillery, engineer, medical, supply and signal units. The Northumbrian Division was typical, consisting of three infantry brigades, the Northumberland, the York and Durham and the Durham Light Infantry (DLI) Brigades. Each brigade was composed of four infantry battalions.

The new Durham battalion designations were as follows:

They were brigaded in the Northumbrian Division in the following manner:

In 1907 Lieutenant General Robert Baden-Powell was appointed to command the Division and he held command from April 1908 to 1910.  Members of the 6/DLI Territorial Force attended weekend training camps such as: [1]

The Northumbrian Division moved to France in April 1915.  In May 1915, the Division was numbered as the 50th and the Brigades received the following numbers:

Between 4 August 1914 and 15 July 1918, 1/6 DLI came under the orders of 151st Brigade 50th Division and between 16 August 1918 and 6 November 1918 it came under the orders of 117th Brigade 39th Division.[4]  Thomas Rowlandson served with the Royal Engineer Signals attached to the 50th Division known as 50th Divisional Signal Company.[5]  At the outbreak of war, the Divisional Royal Engineers were the 1st and 2nd Northumbrian Field Companies commanded by Major G.C. Pollard and Major J.E McPherson respectively and the Northumbrian Divisional Signal Company under the command of Captain W.H. Dodds.[6]