Thomas “Tom” Simpson[2] was born 20 September 1911[3], the son of Thomas and Hannah Simpson and brother to Alice and Hannah.  At this time, the family lived at Eldon Lane where Thomas senior worked as a coal miner.[4]  Tom may have had at least another brother, Harold born in April 1921 who is recorded as living with Thomas [senior] and Hannah at John Street, Eldon Lane in 1939. [5]    Earlier, in 1935, Tom married Gladys Heaviside.[6]  In 1939, Gladys lived with her parents Ralph and Elizabeth Heaviside at Irene Terrace, West Auckland together with her brother Ralph and her son Tony Simpson born 13 January 1937.[7]  Ralph senior was a retired coal miner and Ralph junior was a motor bus conductor.  Gladys is recorded as “household duties”.  Tom Simpson is not recorded as living here, presumably he was posted with the Royal Navy.[8]

The service records of Able Seaman Thomas Simpson have not been researched.  He was aboard HMS Barham when it was sunk 25 November 1941.

HMS Barham was a Queen Elizabeth class battleship built for the Royal Navy in 1910 and participated in the Great War, the Battle of Jutland 1916. 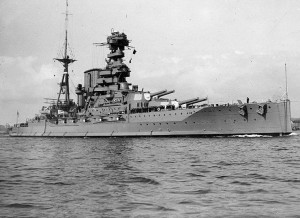 She was at sea in the Mediterranean when the Second World War began in September 1939.  She participated in the Battle of Dakar in mid-1940, where she damaged a Vichy French battleship and was slightly damaged in return.  She covered many Malta convoys and during the Battle of Cape Matapan in March 1941, she helped sink an Italian heavy cruiser.  Two months later during the evacuation of Crete, HMS Barham was damaged by German aircraft.

25 November 1941: HMS Barham was sunk off the Egyptian coast by the German submarine U-331 with the loss of 862 crewmen, approximately 2/3 of her crew.  On the afternoon, 1st Battle Squadron HMS Barham, HMS Queen Elizabeth and HMS Valiant with an escort of 8 destroyers departed Alexandria to cover the 7th and 15th Cruiser Squadrons as they hunted for Italian convoys in the central Mediterranean.   U-331 under the command of Oberleutnant zur See Han-Deidrich von Tiesenhausen detected the British ships and fired all 4 torpedo tubes at a range of 375 metres [410 yards].  He was not certain that he’d hit the ship.  However, 3 of the 4 torpedoes struck amidships, Barham capsized to port and was lying on her side when a massive explosion occurred about 4 minutes after she’d been hit.  The Board of Enquiry ascribed the magazine explosion to a fire in the 4-inch magazines outboard of the main 15-inch magazines, which would have then spread to and detonated the contents of the main magazines.  There was no time for evacuation and due to the speed at which she sank, 862 officers and ratings were killed.  The destroyer Hotspur and HMAS Nizam rescued some 487 men.

The sinking was captured on film by a cameraman from Pathé News aboard HMS Valiant [10] and it makes quite dramatic and shocking viewing.  It was a devastating explosion.

HMS Barham has an Association where further details can be obtained.[11] 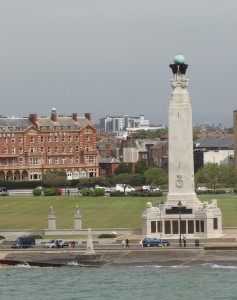 There are several memorials to the crew of HMS Barham including a memorial bench located in Nothe Gardens, Weymouth.[13]